The Making of the Milky Way Halo

A group of ESO astronomers [1] has used new observations, obtained with the first 8.2-m VLT Unit Telescope (UT1) during the "Science Verification" programme, to show that a globular cluster in the Milky Way galaxy is "evaporating" and has already lost its faintest stars.

This is the first observational result of its kind and has important implications for future studies. It may be explained by a gradual loss of such stars from the cluster into the Milky Way halo, a roughly spherical region around the much flatter, spiral structure in which most of the stars and nebulae are located.

The new result lends strong support to current theories about the evolution of the structure of this halo and also provides insights into the formation of the galaxy in which we live.

Globular clusters and the halo of the Milky Way

The stars that we observe in the halo of the Milky Way represent only a small fraction of the total mass in this region. Investigations of the motions of stars in our Galaxy have shown that this halo must harbour much more matter, which is hidden from our view. The same phenomenon has been observed in other galaxies, and astronomers refer to it as "dark matter". It is at this moment not known what this matter consists of.

The brightest objects in the halo are the globular clusters . They are large groupings of stars that were formed together in the very early evolutionary phases of the Milky Way, some 12,000 - 14,000 million years ago. This happened soon after the moment when the first structures emerged in the large cloud of primordial hydrogen in which our Galaxy was born.

A popular scenario describes the first build-up of galactic structure, i.e. of stars and gas, as when normal matter began to collect inside the dark-matter halo, due to its strong gravitational attraction. The globular clusters were most probably the first denizens of this protogalaxy .

It is believed that the Milky Way Galaxy subsequently "cannibalized" other nearby dwarf galaxies and clusters, and that this process is still going on. Some astronomers have even speculated that many of the globular clusters now observed may originally have been the particularly dense, central regions ("nuclei") of unfortunate, small galaxies whose more tenuous outer structures have since been dissipated into the Galactic halo. If this is the case, then the Milky Way halo may now contain fossil structures, left over from this process (referred to as "accretion").

A study of the halo and the objects therein may therefore provide very useful information about the formation and evolution of the Milky Way, our home galaxy.

In order to investigate this basic issue in more detail, CCD images obtained with the Test Camera at the first 8.2-m VLT Unit Telescope (UT1) have been used to study one of the old globular clusters in the Milky Way.

NGC 6712 [2] is an enormous swarm of stars in the southern constellation Scutum (The Shield). It is located at a distance of about 23,000 light-years, in the direction towards the Galactic Center. This cluster is of spherical form and contains somewhat fewer than 1 million stars, all of which are lighter than our Sun.

NGC 6712 is one of about 150 globular clusters now known in the Milky Way. They all move in extended elliptical orbits that periodically take them through the densely populated main plane of our Galaxy in which the stars and nebulae form the well-known spiral structure. From there they move into the halo regions high above the plane and then down again. The orbit of NGC 6712 is comparatively small and the cluster passes particularly close to the Galactic Center. The orbital period is in the short range so this happens rather frequently. In fact, it appears that NGC 6712 crossed the Galactic plane just a few million years ago.

During the VLT UT1 Science Verification Programme in August 1998, several exposures of NGC 6712 were obtained in blue, green, and red light under excellent atmospheric conditions (seeing about 0.5 arcsec). Most of them lasted 15 min and the CCD frames cover the center of NGC 6712 as well as some surrounding areas.

The ESO astronomers used these images to investigate the properties of the stars in NGC 6712 and to look for possible signatures of the accretion process that is supposed to have formed the halo of the Milky Way. Thanks to the excellent observaitonal data from the VLT, they were able to measure accurately the brightness and colours of even quite faint stars in NGC 6712. The study concentrated on cluster stars in an interval corresponding to slightly less bright than the Sun and down to about 100 times fainter. The mass of the brightest stars is about 80% of that of the Sun, while the faintest objects have about 30% of its mass.

To some surprise, the astronomers found that small and faint stars are much less numerous in NGC 6712 than what would be expected on the basis of previous studies of other globular clusters. Since the brightness of cluster stars is proportionate to their mass, this also means that NGC 6712 possesses amazingly few light stars. Indeed, all other globular clusters studied so far have been found to contain many more faint and light stars than brighter, more massive ones. The observed effect is well demonstrated by the "mass function" for NGC 6752.

Guido De Marchi comments: "In normal globular clusters, stars with a mass of one third of the Sun are usually at least four times more frequent than solar-like stars". But in NGC 6712, he and his colleagues saw just the opposite effect. In this cluster, there are less than half as many stars of this mass, when compared to solar-like stars.

Where have all the light stars gone?

It has been known for some time that stars form through the fragmentation of giant molecular clouds. It has also been noticed that this process always leads to the formation of many more light stars than heavy stars. Since there is no reason to believe that the star formation in NGC 6712 took place in a different way, the ESO team concluded that the observed deficit of light stars must be due to another effect.

Current theories infer that, in the accretion process that formed our Galaxy, globular clusters were particularly vulnerable to disruption in the strong tidal field of the emerging Milky Way. Astronomers refer to this process as "evaporation" of stars from the cluster - the individual stars remain fully intact but are no longer gravitationally bound to the cluster. For this reason, the clusters that are still around today probably only constitute a small fraction of the original population. This also implies that a significant part, if not all, of the stars now observed in the halo might have been dislodged from such clusters at an earlier epoch.

The most natural explanation for these new VLT observations is therefore that many, perhaps most, of the small stars originally present in NGC 6712 have been lost from the cluster and are now moving around in the halo of the Milky Way .

This also seems very plausible, because the galactic orbit of NGC 6712 is such that it frequently dives deeply into the dense regions near the Galactic Center and Bulge. The cluster suffers tremendous "gravitational shocks" during such passages that have obviously contributed to the loss of its faintest and smallest stars, which are easier to dislodge than the heavier ones.

First clear observation of its kind

Although this effect has long been predicted, it had so far been difficult to find unambiguous evidence for this kind of strong disruption of a globular cluster in the Galactic halo. It appears that NGC 6712 shows this particularly clearly because it passes through especially dense regions in the galactic plane.

With its excellent ability to produce sharp images of even very faint stars, however, the VLT has now made it possible to study the lightest stars in a distant globular cluster. Adds Francesco Paresce : "NGC 6712 is the first real example of "evaporation" of stars, allowing us to watch the process unfold in front of our eyes."

Subsequent, even more detailed measurements of the steady loss of stars from NGC 6712 will provide key information about the evolution of structure in our Galaxy and deeper insight into the history of its formation.

This successful study is only one example of what is about to come and nobody doubts that the VLT will soon provide other demonstrations of its great potential for front-line research.

Just some weeks from now, on April 1, 1999, the first research programmes by "visiting" astronomers will start with the FORS1 and ISAAC instruments at the VLT UT1.

[1] The group consists of Guido De Marchi, Francesco Paresce, Bruno Leibundgut and Luigi Pulone, all from the the European Southern Observatory. An article on the work described in this Press Release will appear in the European research journal Astronomy & Astrophysics on March 1, 1999. 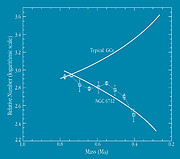 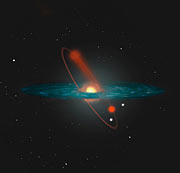 PR Image eso9909c
Artistic impression of NGC 6712 losing stars into the Milky Way halo
Send us your comments!
Subscribe to receive news from ESO in your language
Accelerated by CDN77
Terms & Conditions