While a major effort is now spent on the Very Large Telescope and its advanced instruments at Paranal, ESO is also continuing to operate and upgrade the extensive research facilities at La Silla, its other observatory site. Within this programme, a new and powerful spectrograph, known as the Fibre-fed Extended Range Optical Spectrograph (FEROS), has recently been built by a consortium of European institutes. It was commissioned in late 1998 at the ESO 1.52-m telescope by a small team of astronomers and engineers and has already produced the first, interesting scientific results.

FEROS is able to record spectra of comparatively faint stars. For instance, it may be used to measure the chemical composition of stars similar to our Sun at distances of up to about 2,500 light-years, or to study motions in the atmospheres of supergiant stars in the Magellanic Clouds. These satellite galaxies to the Milky Way are more than 150,000 light-years away and can only be observed with telescopes located in the southern hemisphere.

During the first tests of FEROS at the 1.52-m telescope, spectra were obtained of many different stars. Some of these observational data could be used for scientific purposes and, in one case, led to the discovery of unusual properties of a giant star in a stellar cluster. Its spectrum shows an unexplained large amount of the cosmologically important, light element Lithium. The star is thus an obvious object for further, even more detailed studies with ESO's Very Large Telescope (VLT).

This giant star, designated as S50, is a member of the open-type stellar cluster Be21 (less dense than globular clusters). This cluster is of special interest, since its stars contain few elements heavier than hydrogen and helium. It is located in the direction opposite to the Galactic Center and the distance has been measured as approximately 16,000 light-years. All of its stars were formed at the same time, about 2,000 - 2,500 million years ago; this corresponds to half of the age of the Solar System. The study of stars in this cluster provides important information about the chemical evolution of the Milky Way galaxy.

The significance of Lithium

Lithium is not a very common element in daily life (except in batteries and certain medical drugs), but it is of great interest in astronomy. It is the heaviest element that is supposed to have been created in measurable quantities in the early Universe, soon after the Big Bang.

All stars destroy most of their Lithium soon after their formation, although some manage to produce this element again at a later stage of their evolution [1]. There may be a substantial loss of Lithium from evolved stars into the interstellar medium (ISM). This element is indeed observed in the ISM. Calculations have shown that the primordial (original) abundance of Lithium was about ten times less than what is now measured in the ISM.

The present abundance of Lithium in the Sun is over 100 times less than in the ISM. Large quantities of this element would certainly not be expected in a star as old as S50, especially since violent motions in the atmospheres of such giant stars very efficiently mix the material in the upper layers with that from the star's inner regions where the ongoing nuclear processes quickly destroy any Lithium. Still, the FEROS spectra show the presence in S50 of Lithium in quantities similar to that in the ISM - or in the proto-solar nebula from which the Sun and the planets formed, about 4,600 million years ago!

The spectra of many hundreds of giant stars in the solar neighbourhood have been recorded, but only a few have shown such an unusual presence of Lithium. This is the first time that a Lithium rich giant star has been found in a stellar cluster and for which a comparatively accurate age can be determined. In fact, S50 appears to contain more of this fragile element than any other giant star observed so far.

What is the origin of the Lithium in S50?

How can this unexpected observation be explained? The astronomers do not know, but suggest two possible causes.

One might be the recent infall of a large planet or a brown dwarf star (an object too small to become a star and hence without nuclear processes, cf. eso9707) into the atmosphere of S50 . Another is that the star experiences a very short evolutionary period very rarely observed [2] and during which Lithium is produced and brought to the upper atmosphere.

According to our current knowledge of stellar evolution, S50 is due to lose much of its mass through a strong stellar wind during the next few million years. Its Lithium will then be returned to the ISM and thereby contribute to the above mentioned enrichment of this medium.

There is little doubt that this star and many other giant stars in stellar clusters will be high on the list of objects that will soon be observed with the next large instrument to be installed at the VLT on Paranal. Some months after the First Light event of the second VLT 8.2-m Unit Telescope (UT2) in March 1999, the UVES high-dispersion spectrograph will be mounted on this large telescope. This powerful telescope/instrument combination will also be able to extend this type of astronomical studies to fainter and more distant stars, in the Milky Way as well as in the Magellanic Clouds.

Still, the VLT UT2 will also have many other tasks to perform. It is therefore important that FEROS is available as an effective and dedicated spectroscopic facility that is bound to uncover many other unusual objects in the southern sky.

FEROS is a state-of-the-art high-resolution spectrograph, based on an advanced concept. The light from celestial objects is collected by the 1.52-m telescope and transferred to the new instrument through optical fibres.

It was built in a collaboration between the Heidelberg State Observatory , the Copenhagen University Astronomical Observatory and ESO . The Heidelberg State Observatory was responsible for the overall design and construction, as well as the data reduction software; this institution was also involved in the construction of the first major instrument for the VLT, FORS. The Copenhagen University Observatory provided the detector controller and took care of the associated installation and tests. ESO supplied the first concept for the new spectrograph, its infrastructure, the fibre link between the telescope and the instrument, and the CCD detector by means of which the spectra are recorded.

FEROS is a rather unique instrument. It combines a very large spectral coverage from the near-ultraviolet to the infrared region of the spectrum (360 to 920 nm, altogether 560 nm in one exposure) and a high resolving power. The full spectral range is divided into about 100,000 separate pixels, each of which corresponds to a velocity interval of about 3 km/sec.

Moreover, FEROS is extremely light-efficient for an instrument of this complex type. Despite the large number of optical elements needed to produce exceedingly detailed spectra of very high quality, 46% of the light entering the spectrograph is actually recorded by the detector.

FEROS is mounted on an optical bench in an isolated and thermally controlled room next to the telescope and is an extremely stable instrument. It is operated in a very user-friendly way, and the observing astronomer can obtain quick-look results directly at the telescope using the FEROS on-line data reduction pipeline that is integrated into the ESO-MIDAS image processing system.

[1] In addition to very young stars that have not yet destroyed their "original" Lithium, this element is also found in the upper atmospheres of some peculiar stars of the so-called Asymptotic Giant Branch (AGB) type. It is believed that this is the result of nuclear burning of the Helium isotope 3 He that has been produced inside such stars during an earlier evolutionary phase. The Lithium is then brought to the surface by means of "convection", i.e., strong turbulence in the star's thin gaseous layers.

[2] From the observed properties of S50 (magnitude, colour, spectrum), it is clear that this star is not of the AGB type . 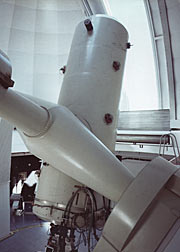 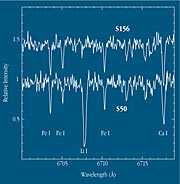 PR Image eso9905b
Lithium in giant Star 850 in stellar cluster Be21
Send us your comments!
Subscribe to receive news from ESO in your language
Accelerated by CDN77
Terms & Conditions