When is a minor object in the solar system a comet? And when is it an asteroid? Until recently, there was little doubt. Any object that was found to display a tail or appeared diffuse was a comet of ice and dust grains, and any that didn't, was an asteroid of solid rock. Moreover, comets normally move in rather elongated orbits, while most asteroids follow near-circular orbits close to the main plane of the solar system in which the major planets move.

However, astronomers have recently discovered some 'intermediate' objects which seem to possess properties that are typical for both categories. For instance, a strange object (P/1996 N2 - Elst-Pizarro) was found last year at ESO which showed a cometary tail, while moving in a typical asteroidal orbit. At about the same time, American scientists found another (1996 PW) that moved in a very elongated comet-type orbit but was completely devoid of a tail.

Now, a group of European scientists, by means of observations carried out at the ESO La Silla observatory, have found yet another object that at first appeared to be one more comet/asteroid example. However, continued and more detailed observations aimed at revealing its true nature have shown that it is most probably a comet . Consequently, it has received the provisional cometary designation P/1997 T3 .

Some time ago, Claes-Ingvar Lagerkvist (Astronomical Observatory, Uppsala, Sweden), in collaboration with Gerhard Hahn, Stefano Mottola, Magnus Lundström and Uri Carsenty (DLR, Institute of Planetary Exploration, Berlin, Germany), started to study the distribution of asteroids near Jupiter. They were particularly interested in those that move in orbits similar to that of Jupiter and which are located `ahead' of Jupiter in the so-called 'Jovian L4 Lagrangian point'. Together with those 'behind' Jupiter, these asteroids have been given the names of Greek and Trojan Heroes who participated in the famous Trojan war. Thus such asteroids are known as the Trojans and the mentioned programme is referred to as theUppsala-DLR Trojan Survey.

In September and October/November 1996, the ESO Schmidt telescope was used to cover about 900 square degrees twice centered on the sky field in the direction of the Jovian L4 point. The observations were made by ESO night-assistants Guido and Oscar Pizarro . By inspection of those from September, Claes-Ingvar Lagerkvist found a total of about 400 Trojan asteroids, most of which were hitherto unknown. Their accurate positions were measured on a two-coordinate measuring machine at the ESO Headquarters in Garching (Germany). During the same period, the 0.6-m Bochum telescope at La Silla was used for additional observations of positions and magnitudes.

An asteroid with a tail?

A new object was found by Claes-Ingvar Lagerkvist on a film obtained with the ESO 1-metre Schmidt telescope on October 1, 1997. The appearance was that of a point light source, i.e. it was presumably of asteroidal nature.

However, when Andreas Nathues (DLR, Institute of Planetary Exploration) soon thereafter obtained seven unfiltered CCD images on three consecutive nights with the 60-cm 'Bochum telescope' at La Silla, Uri Carsenty found a tail extending 15 arcseconds in the WSE direction from the point source. The (red) magnitude was about 19, or 150,000 times fainter than what is visible to the naked eye. More observations were obtained at La Silla during the following nights, confirming the persistent presence of this tail.

In late October 1997, further images of the new object and its tail were taken with the ESO 3.5-m New Technology Telescope (NTT) at La Silla, cf. ESO Press Photo eso9729. On these, the narrow tail was seen to be at least 90 arcsec long and pointing roughly in the Sun direction. The steady appearance and the sunward orientation of the tail indicates that it consists of dust. Moreover, a preliminary image analysis shows the presence of a weak and very condensed coma of dust grains around the nucleus.

Interestingly, a series of images through several broadband filters with a total of almost 30 min exposure time did not show any trace of a normal, anti-sunward tail seen in most comets.

Still, these observations indicate that the object resembles a typical comet much more than originally thought. This is also supported by the fact that its orbit, calculated on the basis of positional observations during the past month, has been found to be moderately elongated (eccentricity 0.36). The mean distance to the Sun is 6.67 AU (1000 million kilometres), but it comes as close as 4.25 AU (635 million kilometres) at its perihelion. The orbital period is about 17 years.

It will be interesting to follow this new object in coming years. Will it remain 'cometary' or will the unusual tail disappear after a while? Could it be that some `asteroids' in 'cometary' orbits, if observed in more detail with a larger telescope, as was done in this case with the NTT, will also turn out to have a faint coma and even a tail?

It is at this moment still unknown which implications the discovery of apparently 'intermediate' objects may have on our understanding of the origin and evolution of the solar system. In particular, it is not at all clear whether they represent a completely new class of objects with an internal structure (and composition?) that is significantly different from a `dirty-snowball' cometary nucleus or a rocky asteroid. It may also be that some asteroids have substantial deposits of icy material on or near the surface that may be set free under certain circumstances and mimic cometary activity. This might in theory happen by collisions with other, smaller objects or due to an internal heat source. Only further observations of such objects will allow to tell.

However, when Andreas Nathues (DLR, Institute of Planetary Exploration) soon thereafter obtained seven unfiltered CCD images on three consecutive nights with the 60-cm 'Bochum telescope' at La Silla, Uri Carsenty found a tail extending 15 arcseconds in the WSE direction from the point source. The (red) magnitude was about 19, or 150,000 times fainter than what is visible to the naked eye. More observations were obtained at La Silla during the following nights, confirming the persistent presence of this tail.

Here are some WWW-addresses where more useful information may be obtained about the comet/asteroid phenomenon: 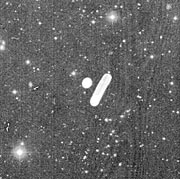 PR Image eso9729a
An asteroid with a tail? 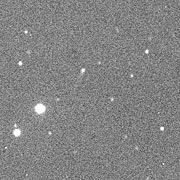