MOST MASSIVE GLOBULAR CLUSTER IN OUR GALAXY

Far down in the southern sky, in the constellation of Centaurus, a diffuse spot of light can be perceived with the unaided eye. It may be unimpressive, but when seen through a telescope, it turns out to be a beautiful, dense cluster of innumerable stars [1]. Omega Centauri, as this object is called, is the brightest of its type in the sky. We refer to it as a "globular cluster", due to its symmetric form. It belongs to our Milky Way galaxy and astrophysical investigations have shown that it is located at a distance of about 16,500 light-years (1 light-year = 9,460,000,000,000 km). Nobody knows for sure how many individual stars it contains, but recent estimates run into the millions. Most of these stars are more than 10,000 million years old and it is generally agreed that Omega Centauri has a similar age. Measurements of its motion indicate that Omega Centauri plows through the Milky Way in an elongated orbit. It is not easy to understand how it has managed to keep its stars together during such an extended period.

A group of astronomers [2] have recently carried through a major investigation of Omega Centauri. After many nights of observations at the ESO La Silla observatory, they now conclude that not only is this globular cluster the brightest, it is indeed by far the most massive known in the Milky Way.

The very time-consuming observations were made during numerous observing sessions over a period of no less than 13 years (1981-1993), with the photoelectric spectrometer CORAVEL mounted on the 1.5-m Danish telescope at La Silla. The CORAVEL instrument (COrelation RAdial VELocities) was built in a joint effort between the Geneva (Switzerland) and Marseilles (France) observatories. It functions according to the cross-correlation technique, by means of which the spectrum of the observed star is compared with a "standard stellar spectrum" [3].

HOW HEAVY IS OMEGA CENTAURI?

In the present study, a total of 1701 measurements were made of 483 giant and sub-giant stars in Omega Centauri, located between 10 arcsec and 1350 arcsec from its centre. The mean velocities could be determined for 469 of them and the astronomers were then able to estimate the spread of stellar velocities at various locations in the cluster. The technical term for this quantity is "velocity dispersion". It increases with the strength of the gravitational field in which the stars move, and is therefore an indicator of the total mass of the entire cluster.

The new observations show that the velocity dispersion is about 22 km/sec at the centre of Omega Centauri. The dispersion decreases outwards, but the central value is the largest ever measured in any globular cluster. When taken together with accurate measurements of the distribution of the stars in the cluster, this leads to an estimate of the total mass of Omega Centauri at about 5 million solar masses (1 solar mass = 2 10^30 kg). This is to be compared with the masses of other globular clusters in our Galaxy which in most cases have been found to be of the order of 100,000 solar masses only.

In fact, because of its great size and mass, Omega Centauri now appears to be an object that is intermediate between the ordinary globular clusters in the Milky Way and the much larger dwarf spheroidal galaxies which move around our galaxy. This great mass obviously contributes to its long-term stability.

1 This Press Release is accompanied by a photograph, eso9411a.

3 The light from the star in Omega Centauri is dispersed into a spectrum. It then passes through a metal mask with holes that correspond to about 1500 absorption lines, measured in the spectrum of the bright star Arcturus. If the velocity of the star would be exactly the same as that of Arcturus, the (dark) absorption lines in the star's spectrum would fall exactly on the holes in the mask and a minimum of light would pass through; if the velocity is different, a small shift of the position of the mask will restore this situation. The size of this shift accurately indicates the Doppler shift of the star and therefore directly measures its velocity. Despite the faintness of the stars in Omega Centauri, CORAVEL is able to measure their velocities with a typical uncertainty of only 0.7 km/sec. 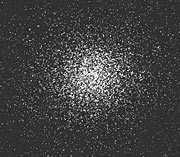 PR Image eso9411a
Omega Centauri
Send us your comments!
Subscribe to receive news from ESO in your language
Accelerated by CDN77
Terms & Conditions