The Drama of Starbirth

A new image from ESO’s Very Large Telescope gives a close-up view of the dramatic effects new-born stars have on the gas and dust from which they formed. Although the stars themselves are not visible, material they have ejected is colliding with the surrounding gas and dust clouds and creating a surreal landscape of glowing arcs, blobs and streaks.

The star-forming region NGC 6729 is part of one of the closest stellar nurseries to the Earth and hence one of the best studied. This new image from ESO’s Very Large Telescope gives a close-up view of a section of this strange and fascinating region (a wide-field view is available here: eso1027). The data were selected from the ESO archive by Sergey Stepanenko as part of the Hidden Treasures competition [1]. Sergey’s picture of NGC 6729 was ranked third in the competition.

Stars form deep within molecular clouds and the earliest stages of their development cannot be seen in visible-light telescopes because of obscuration by dust. In this image there are very young stars at the upper left of the picture. Although they cannot be seen directly, the havoc that they have wreaked on their surroundings dominates the picture. High-speed jets of material that travel away from the baby stars at velocities as high as one million kilometres per hour are slamming into the surrounding gas and creating shock waves. These shocks cause the gas to shine and create the strangely coloured glowing arcs and blobs known as Herbig–Haro objects [2].

In this view the Herbig–Haro objects form two lines marking out the probable directions of ejected material. One stretches from the upper left to the lower centre, ending in the bright, circular group of glowing blobs and arcs at the lower centre. The other starts near the left upper edge of the picture and extends towards the centre right. The peculiar scimitar-shaped bright feature at the upper left is probably mostly due to starlight being reflected from dust and is not a Herbig–Haro object.

This enhanced-colour picture [3] was created from images taken using the FORS1 instrument on ESO’s Very Large Telescope. Images were taken through two different filters that isolate the light coming from glowing hydrogen (shown as orange) and glowing ionised sulphur (shown as blue). The different colours in different parts of this violent star formation region reflect different conditions — for example where ionised sulphur is glowing brightly (blue features) the velocities of the colliding material are relatively low — and help astronomers to unravel what is going on in this dramatic scene.

[1] ESO’s Hidden Treasures 2010 competition gave amateur astronomers the opportunity to search through ESO’s vast archives of astronomical data, hoping to find a well-hidden gem that needed polishing by the entrants. Participants submitted nearly 100 entries and ten skilled people were awarded some extremely attractive prizes, including an all expenses paid trip for the overall winner to ESO’s Very Large Telescope (VLT) on Cerro Paranal, in Chile, the world’s most advanced optical telescope. The ten winners submitted a total of 20 images that were ranked as the highest entries in the competition out of the near 100 images.

[2] The astronomers George Herbig and Guillermo Haro were not the first to see one of the objects that now bear their names, but they were the first to study the spectra of these strange objects in detail. They realised that they were not just clumps of gas and dust that reflected light, or glowed under the influence of the ultraviolet light from young stars, but were a new class of objects associated with ejected material in star formation regions.

[3] Both the ionised sulphur and hydrogen atoms in this nebula emit red light. To differentiate between them in this image the sulphur emission has been coloured blue. 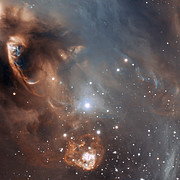 PR Image eso1109a
Close-up of the drama of star formation 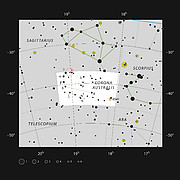 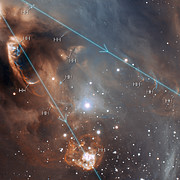 PR Video eso1109a
Zooming in on a stellar nursery in Corona Australis
Send us your comments!
Subscribe to receive news from ESO in your language
Accelerated by CDN77
Terms & Conditions