This magnificent view of the region around the star R Coronae Australis was created from images taken with the Wide Field Imager (WFI) at ESO’s La Silla Observatory in Chile. R Coronae Australis lies at the heart of a nearby star-forming region and is surrounded by a delicate bluish reflection nebula embedded in a huge dust cloud. The image reveals surprising new details in this dramatic area of sky.

The star R Coronae Australis lies in one of the nearest and most spectacular star-forming regions. This portrait was taken by the Wide Field Imager (WFI) on the MPG/ESO 2.2-metre telescope at the La Silla Observatory in Chile. The image is a combination of twelve separate pictures taken through red, green and blue filters.

This image shows a section of sky that spans roughly the width of the full Moon. This is equivalent to about four light-years at the distance of the nebula, which is located some 420 light-years away in the small constellation of Corona Australis (the Southern Crown). The complex is named after the star R Coronae Australis, which lies at the centre of the image. It is one of several stars in this region that belong to the class of very young stars that vary in brightness and are still surrounded by the clouds of gas and dust from which they formed.

The intense radiation given off by these hot young stars interacts with the gas surrounding them and is either reflected or re-emitted at a different wavelength. These complex processes, determined by the physics of the interstellar medium and the properties of the stars, are responsible for the magnificent colours of nebulae. The light blue nebulosity seen in this picture is mostly due to the reflection of starlight off small dust particles. The young stars in the R Coronae Australis complex are similar in mass to the Sun and do not emit enough ultraviolet light to ionise a substantial fraction of the surrounding hydrogen. This means that the cloud does not glow with the characteristic red colour seen in many star-forming regions.

The huge dust cloud in which the reflection nebula is embedded is here shown in impressively fine detail. The subtle colours and varied textures of the dust clouds make this image resemble an impressionist painting. A prominent dark lane crosses the image from the centre to the bottom left. Here the visible light emitted by the stars that are forming inside the cloud is completely absorbed by the dust. These objects could only be detected by observing at longer wavelengths, by using a camera that can detect infrared radiation.

R Coronae Australis itself is not visible to the unaided eye, but the tiny, tiara-shaped constellation in which it lies is easily spotted from dark sites due to its proximity on the sky to the larger constellation of Sagittarius and the rich star clouds towards the centre of our own galaxy, the Milky Way. 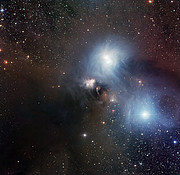 PR Video eso1027b
Panning across the R Coronae Australis region
Send us your comments!
Subscribe to receive news from ESO in your language
Accelerated by CDN77
Terms & Conditions