When, in a distant future, the Sun begins to expand and evolves into a "giant" star, the surface temperature on the Earth will rise dramatically and our home planet will eventually be incinerated by that central body. Fortunately for us, this dramatic event is several billion years away. However, that sad fate will befall another planet, just discovered in orbit about the giant star HD 47536, already within a few tens of millions of years. At a distance of nearly 400 light-years from us, it is the second-remotest planetary system discovered to date [1]. This is an interesting side-result of a major research project, now carried out by a European-Brazilian team of astronomers [2]. In the course of a three-year spectroscopic survey, they have observed about 80 giant stars in the southern sky with the advanced FEROS spectrograph on the 1.52-m telescope installed at the ESO La Silla Observatory (Chile). It is one of these stars that has just been found to host a giant planet. This is only the fourth such case known and with a diameter of about 33 million km (or 23.5 times that of our Sun), HD 47536 is by far the largest of those giant stars [1]. The distance of the planet from the star is still of the order of 300 million km (or twice the distance of the Earth from the Sun), a safe margin now, but this will not always be so. The orbital period is 712 days, i.e., somewhat less than two Earth years, and the planet's mass is 5 - 10 times that of Jupiter. The presence of exoplanets in orbit around giant stars, some of which will eventually perish into their central star (be "cannibalized"), provides a possible explanation of the anomalous abundance of certain chemical elements that is observed in the atmospheres of some stars. This interesting discovery bodes well for coming observations of exoplanetary systems with new, more powerful instruments, like HARPS to be installed next year at the ESO 3.6-m telescope on La Silla, and also the Very Large Telescope Interferometer (VLTI) now being commissioned at Paranal.

The structure and evolution of stars like our Sun are quite well understood. They are born by contraction in immense clouds of dust and gas and when the central density and temperature become high enough, nuclear fusion ignites in their interiors. Then follows a long period of relative calm - the Sun is now in this phase - that ends when the nuclear fuel runs out. A direct result is that the star begins to expand and soon becomes a "giant". During this phase, the surface temperature drops somewhat (but is still several thousand degrees) and the colour of the star changes from yellow to red.

In the case of the Sun, this will happen some billion years from now. At some moment, our star will become larger and the surface of our home planet will become exceedingly hot, incinerating whatever remaining lifeforms that cannot protect themselves.

Later, the Sun will shred its outer layers into space and a small, hot core will become visible. This final stage of stellar evolution can be observed as beautiful "Planetary Nebulae", e.g. the Dumbbell Nebula of which an impressive VLT photo is available.

A spectroscopic survey of giant stars

Since 1999, a European-Brazilian team of astronomers [2] has been studying a selection of comparatively bright giant stars with the goal to learn more about their physical properties. In particular, detailed spectra have been obtained by means of the advanced FEROS spectrograph on the 1.52-m telescope that is installed at the ESO La Silla Observatory in Chile.

About 80 stars have been regularly observed with this instrument, in order to search for possible velocity variations [4]. In ESO Press Photo eso0305, their temperature and intrinsic brightness are plotted in the so-called Hertzsprung-Russell diagram [3], a very useful way of illustrating stellar evolution.

The background for this ambitious research project is that recent observations indicate that some giant stars may undergo small velocity variations with periods from days to years. While short-term variations are likely to be caused by oscillations in their extended and tenous atmospheres, there are at least three possible causes for long-term variations: 1) the gravitational pull of one or more orbiting planets, 2) radial pulsations of the entire star, or 3) variable surface patterns due to stellar activity.

Which of these possibilities are behind the observed velocity variations? How many of those stars pulsate? Do some of them possess planets and if so, are planetary systems around giant stars common or not?

"These are very fundamental questions" says team leader Johny Setiawan of the Kiepenheuer-Institut in Freiburg (Germany), "and the present discovery was somehow unexpected. Many of our giant stars show similar long-period velocity variations which we suspect are due to stellar activity".

The extensive observations began three years ago, with the main aim to pin down the cause(s) for any possible long-term variations. For this programme to succeed, it was also necessary to monitor other properties of these stars, in particular more rapid changes in the upper atmosphere ("stellar activity").

The first results indicate that about 70% of these stars display velocity variations. Among them, the 6th-magnitude star HD 47536 in the southern constellation of Canis Major (The Great Dog) soon caught the eye of the observers, as the measured velocity variations strongly indicated the presence of a planetary companion. The same FEROS spectra also show that other possible explanations, including stellar activity, are very unlikely to be responsible for those variations.

At a distance of 396 light-years, the new exoplanet is the second-most remote one found to date. It moves around HD 47536 in a slightly elongated orbit and one revolution lasts somewhat less than two Earth years (712 days). Depending on the mass of the star (which is not well known yet), the distance of the planet from the star is somewhere between 240 and 337 million km (the mean distance of planet Mars to the Sun is 228 million km) and the new planet has between 4.9 and 9.7 times the mass of planet Jupiter (for assumed stellar mass 1.1 and 3.0 times that of the Sun, respectively). The indicated planetary mass is in any case too small for this object to be a "failed star", it is a bona-fide planet.

"We are very excited about this discovery", says Luca Pasquini of ESO, "because it now widens the search for exoplanets towards more massive stars. The observational problem is that most massive stars rotate very rapidly during the first phase of their life. This makes accurate measurements of minute velocity variations caused by the gravitaional pull of accompanying planets virtually impossible. However, in the later phase of their lives when they become giants, they slow down considerably and we then have a much better chance of detecting possible exoplanets in orbit around them."

The giant planet in orbit around HD 47536 is now most probably witnessing some of those dramatic events that will happen to the Earth some billions of years from now. Its central star is slowly but steadily expanding and occupies a progressively larger fraction of the sky above the planet. The insolation is becoming more and more intense, with the resulting atmospheric effects - rising temperature and violent winds. Some tens of millions of years from now, the unlucky planet is doomed to lose its gaseous layers entirely and the surface will become burning hot.

The discovery has other interesting implications. For years, the present team of astronomers has been studying certain giant stars that are found to contain much lithium. However, this light element is rapidly consumed in such stars and it should really not be there.

"No problem now", says team member Licio da Silva from the Observatório Nacional in Rio de Janeiro (Brazil), "one obvious possibility is that those stars have obtained their lithium by recently swallowing a nearby planet. But until recently, this hypothesis was considered rather exotic, because of the lack of evidence of planets in danger". Indeed, with this discovery of a giant planet near a giant star, that explanation is looking quite plausible.

With over 70 other giant stars still under close scrutiny, the perspectives for the present programme appear very promising. The present discovery comes at a moment when the team is working hard to sift through the many observational data - it is quite possible that they will find other giant stars with planet-induced velocity variations.

At the same time, the observational means for this kind of research are getting ever more powerful. Soon, the HARPS very high-precision spectrometer will be installed at the ESO 3.6-m telescope on La Silla. It has been built by the Geneva Observatory in collaboration with ESO and will be dedicated to the search for exoplanets.

[1]: The only known exoplanet that is farther away is that just found around the dwarf star OGLE-TR-56b. Until now, four exoplanets are known in orbits around giant stars, the present one around HD 47536 and others around HD 27442, iota Draconis and gamma Cephei. With a diameter of about 33 million km (i.e., 23.5 times that of the Sun),HD 47536 is by far the largest of these stars (the three others have diameters smaller than 20 million km).

[3]: The diagram is named after Danish astronomer Einar Hertzsprung (1873-1967) and American astronomer Henry Norris Russell (1877 - 1957). At the beginning of the 20th century they independently noticed that red stars come in very different sizes, pioneering subsequent studies of stellar diameters. This diagram plots stellar temperature (or colour) against brightness (or magnitude) and is therefore also known as the "colour-magnitude diagram".

[4]: The (radial) velocity of a star is determined from its spectrum by measuring the (small) wavelength shift of the spectral lines, due to the Doppler effect.

The information presented in this Press Release is based on a research article ("Evidence of a Sub-Stellar Companion around HD 47536" by Johny Setiawan et al.) that will soon appear as a Letter to the Editor in the European research journal "Astronomy & Astrophysics" (Vol. 398 No. 2, p. L19 - February 2003). 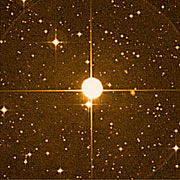 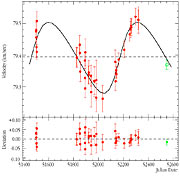 PR Image eso0305d
Distribution of exoplanet distances
Send us your comments!
Subscribe to receive news from ESO in your language
Accelerated by CDN77
Terms & Conditions