Of Rings and Volcanoes

Fine Images of Saturn and Io with VLT NAOS-CONICA

With its new NAOS-CONICA Adaptive Optics facility, the ESO Very Large Telescope (VLT) at the Paranal Observatory has recently obtained impressive views of the giant planet Saturn and Io, the volcanic moon of Jupiter. They show the two objects with great clarity, unprecedented for a ground-based telescope. The photos were made during the ongoing commissioning of this major VLT instrument, while it is being optimized and prepared for regular observations that will start later this year.

"First light" for the new NAOS-CONICA Adaptive Optics facility on the 8.2-m VLT YEPUN telescope at the Paranal Observatory was achieved in November 2001. A second phase of the "commissioning" of the new facility began on January 22, 2002, now involving specialized observing modes and with the aim of trimming it to maximum performance before it is made available to the astronomers later this year.

During this demanding and delicate work, more test images have been made of various astronomical objects [1]. Some of these show selected solar system bodies, for which the excellent image sharpness achievable with this new instrument is of special significance. In fact, the VLT photos of the giant planet Saturn and Io, the innermost of Jupiter's four large moons, are among the sharpest ever obtained from the ground . They even compare well with some photos obtained from space, as can be seen via the related weblinks indicated below. The raw NAOS-CONICA data from which these images shown in this Photo Release were produced are now available via the public VLT Science Archive Facility [2].

Saturn - Lord of the rings

This NAOS/CONICA image of Saturn (ESO Press Photo eso0204a), the second-largest planet in the solar system, was obtained at a time when Saturn was close to summer solstice in the southern hemisphere. At this moment, the tilt of the rings was about as large as it can be, allowing the best possible view of the planet's South Pole. That area was on Saturn's night side in 1982 and could therefore not be photographed during the Voyager encounter.

The dark spot close to the South Pole is a remarkable structure that measures approximately 300 km across. It was only recently observed in visible light from the ground with a telescope at the Pic du Midi Observatory in the Pyrenees (France) - this is the first infrared image to show it.

The bright spot close to the equator is the remnant of a giant storm in Saturn's extended atmosphere that has lasted more than 5 years.

The present photo provides what is possibly the sharpest view of the ring system ever achieved from a ground-based observatory . Many structures are visible, the most obvious being the main ring sections, the inner C-region (here comparatively dark), the middle B-region (here relatively bright) and the outer A-region, and also the obvious dark "divisions", including the well-known, broad Cassini division between the A- and B-regions, as well as the Encke division close to the external edge of the A-region and the Colombo division in the C-region. Moreover, many narrow rings can be seen at this high image resolution, in particular within the C-region - they may be compared with those seen by the Voyager spacecraft during the flybys, cf. the weblinks below.

This image demonstrates the capability of NAOS-CONICA to observe also extended objects with excellent spatial resolution. It is a composite of four short-exposure images taken through the near-infrared H (wavelength 1.6 µm) and K (2.2 µm) filters.

This observation was particularly difficult because of the motion of Saturn during the exposure. To provide the best possible images, the Adaptive Optics system of NAOS was pointed towards the Saturnian moon Tethys, while the image of Saturn was kept at a fixed position on the CONICA detector by means of "differential tracking" (compensating for the different motions in the sky of Saturn and Tethys). This is also why the (faint) image of Tethys - visible south of Saturn (i.e., below the planet in ESO Press Photo eso0204a) - appears slightly trailed.

Io has a diameter of 3660 km and orbits Jupiter at a mean distance of 422,000 km - one revolution takes 42.5 hours. Like the Earth's moon, it always turns the same side towards the planet. As shown by the Voyager spacecraft in 1979, its surface is covered by active volcanoes and lava fields - it is in fact the most volcanic place known in the solar system.

Due to this activity, Io's surface is continuously reshaped. The features now seen are all correspondingly young, with a mean age of the order of 1 million years only. The variations in appearance and colour are due to different volcanic deposits of sulphur compounds. The cause of all this activity is Jupiter's strong gravitational pull that leads to enormous stresses inside Io and related heating of the entire moon.

ESO Press Photo eso0204b is a near-infrared NAOS-CONICA image of Io, obtained on December 5, 2001, through a narrow optical filter at wavelength 2.166 µm. The excellent image resolution makes it possible to identify many features on the surface. Some of these are volcanoes, others correspond to lava fields between these.

ESO Press Photo eso0204c is a composite of that image and another obtained at longer wavelength (3.8 µm). A latitute-longitude grid has been superposed, with the most prominent features identified by name, including some of the large volcanoes and sulphurus plains on this very active moon.

Io has been observed with the NASA Galileo spacecraft since 1996 at higher resolution in the visible and infrared, especially during close encounters with the satellite (a link to Galileo maps of Io is available below). However, this NAOS image fills a gap in the surface coverage of the infrared images from Galileo.

The capability of NAOS/CONICA to map Io in the infrared at the present high image resolution will allow astronomers to continue the survey of the volcanic activity and to monitor regularly the related surface processes .

ESO Press Photo eso0204a is based on four exposures, obtained with VLT YEPUN and NAOS-CONICA on December 8, 2001 (UT). Two of these were made with an H-band filter (10 sec exposure each, wavelength 1.6 µm) and two with a K-band filter (12 sec each, 2.2 µm). The satellite Tethys (diameter 1070 km, orbiting Saturn at a distance of approx. 295,000 km) served as reference source for the Adaptive Optics corrections and the telescope was offset guided to compensate for the differential motion. The frames were reduced in the normal way with classical flats, dark and bias correction. No convolution was made before the two colours were combined to produce the image shown. At the time of the exposure, Saturn was 8.80 AU from the Earth. With a diameter of approx. 120,000 km, its disk subtended an angle of 20.6 arcsec. The nominal resolution of the NAOS-CONICA image, about 0.07 arcsec, thus corresponds to 410 km at Saturn.

ESO Press Photo eso0204b is a reproduction based on a total exposure of 230 sec with VLT YEPUN and NAOS-CONICA on December 5, 2001, made through a Brackett-gamma filter centred at 2.166 µm. The resulting image resolution is 0.068 arcsec. At the moment of the exposure, the distance from the Earth to Io was about 641 million km (4.29 AU) and the image resolution therefore corresponds to approx. 210 km on the surface of the moon. ESO Press Photo eso0204c is based on a combination of the Brackett-gamma (here rendered as blue) with an L' frame (total exposure 4.2 sec; 3.800 µm; red), superposed with a coordinate grid and with some of the major surface features identified. The grid was produced with tools available at the website of the Institut de Mecanique Celeste et de Calcul des Ephemerides.

The following links point to a number of prominent photos of these two objects that were obtained elsewhere. 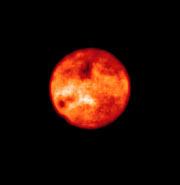 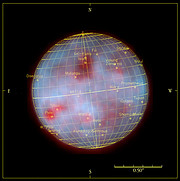 PR Image eso0204c
Io
Send us your comments!
Subscribe to receive news from ESO in your language
Accelerated by CDN77
Terms & Conditions