Visiting with an Old and Active Friend

ESO has released a new image of the famous comet Hale-Bopp, where the large nucleus of ice and dust is still seen glowing. This is very unusual since the comet is currently in a very cold place, between the orbits of Saturn and Uranus, almost 2000 million kilometres away from the Sun.

When Comet Hale-Bopp passed through the inner solar system in early 1997, it was admired in the sky by a substantial fraction of the world's population.

It was the true image of a "classical" comet, with a bright head and an enormous, multi-coloured tail. Due to its fortuitous orbit, it remained visible in the evening sky during several months, with all the associated positive effects. Professional observers at large telescopes around the world gathered the richest data ever obtained from a single comet, amateurs at star parties in different countries made large numbers of beautiful images and hardly a day passed without media reports about the latest developments of this spectacular celestial phenomenon. It is no wonder that, as an extra bonus, the general interest in astronomy received a major boost on this occasion.

ESO has maintained a special Hale-Bopp webpage during the past years; from here there are also links to other Hale-Bopp sites; note, however, that some of them may not be active anymore.

Since the passage four years ago, the comet has been moving away from the Sun and is now located at a distance that corresponds to nearly midway between the orbits of Saturn and Uranus. However, as the comet's orbit is highly inclined to the main plane in which the major planets move, Hale-Bopp is now far below that plane. It is seen deep in the southern sky, south of the Large Magellanic Cloud in the constellation Dorado (The Goldfish). It can therefore only be observed with telescopes located in the southern hemisphere.

As it moves away, observations are made from time to time to document the comet's behaviour. The large 'dirty snowball' nucleus of ice and dust (probably about 50 km diameter) continues to be active, despite the very low temperature where it is now. This is quite unusual for a comet and is clearly confirmed on the present photo (ESO Press Photo eso0108a) from the WFI camera on the MPG/ESO 2.2-m telescope at La Silla, obtained a few days ago. The comet was about 1950 million kilometres (13.0 AU) from the Sun (and about 1965 milion km from the Earth).

Hale-Bopp still has the prominent, curved jet-like structure in the coma that has been observed earlier. No changes in this structure were observed during the three nights of observation. The jet consists of dust (and gas) escaping from the nucleus. It shines in reflected sunlight, as does the rest of the coma and also the very broad, fan-shaped 'tail' (ESO Press Photo eso0108b; towards the upper left). The total size of the comet is still a staggering 2 million kilometres, or about five times the distance between the Earth and the Moon.

Another famous comet, Halley, was found in 1991 to have a significant coma at about the same distance from the Sun. However, while Halley apparently underwent a major, short-lived outburst, possibly because of a collision with a piece of rock or ice, Hale-Bopp has been steadily emitting dust and gas all the time since the perihelion passage four years ago. Most astronomers believe that this unusual state must in some way be connected to the exceptionally large size of its nucleus, but the details are not known.

Hale-Bopp observations still during many years

Astronomers at ESO and elsewhere will continue to follow Hale-Bopp as long as possible, perhaps during the next several decades. It is still relatively bright (magnitude 14.5, or about 2500 times fainter than what can be seen with the unaided eye in a dark sky). It is now moving outwards at a speed of about 11 km/sec, or 1 million km per day. It will be interesting to see how long the present, highly unusual activity continues.

Technical information about the photos

The first image is based on 14 individual exposures with the WFI, obtained during three nights from February 27 to March 2, 2001. They comprised 6 R-frames (each of 180 sec exposure), 6 V-frames (180 sec) and 2 B-frames (240 sec), totalling 44 min exposure time. The image covers about 5.1 x 3.5 arcmin 2, i.e. only a small part of the original 8192 x 8192 pix 2 WFI frame (0.24 arcsec/pix; 34 arcmin across). The second image is a reproduction of the combined R-frames (18 min exposure) that has been 'stretched' to better show the faintest details of the coma and fan-shaped 'tail'. The field measures about 6 x 6 arcmin 2. North is up, and East is left in both photos. The observers were ESO astronomers Olivier Hainaut and Audrey Delsanti who obtained these data during a short period before the objects of their main programme became observable.

PR Image eso0108a
Comet Hale-Bopp, at a distance of nearly 2,000 million kilometres from the Sun 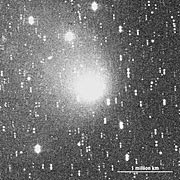 PR Image eso0108b
Comet Hale-Bopp
Send us your comments!
Subscribe to receive news from ESO in your language
Accelerated by CDN77
Terms & Conditions