Peering into a Star Factory

SOFI Finds Young and Massive Stars in the Omega Nebula

Beautiful images of astronomical objects often contain a lot of scientifically interesting information - PR Photo 24a/00, shown above, is a fine example of this old maxime. It provides a deep and unsually wide look into a giant star forming region in the Milky Way. It is known as Messier 17 (M 17), or the Omega, Swan, Horseshoe, or Lobster Nebula, because of its characteristic shape when photographed in visible light. It is located at a distance of approx. 5000 light-years (1.6 kpc), and is seen in the southern constellation of Sagittarius (The Archer), near the main plane of the Milky Way.

This impressive image was obtained by astronomers Leonardo Testi (Arcetri Astrophysical Observatory, Florence, Italy; p.t. Visiting Scientist at ESO-Chile) and Leonardo Vanzi (ESO-Chile) with the SOFI multi-mode instrument at the ESO 3.6-metre New Technology Telescope (NTT) at the La Silla observatory. The observations were made in the course of a research project that is aimed at the detection and study of the formation of massive stars, by means of near-infrared direct and spectral exposures with this instrument.

The new data offer a unique combination of a wide field-of-view, high sensitivity and excellent image quality. The goal of these particular observations was to identify massive stars that are in the act of formation in this area and to record their infrared spectra for a detailed physical study of these rather rare objects.

The formation of massive stars

It is now well established that the formation of stars in our galaxy, the Milky Way system, predominantly takes place in Giant Molecular Clouds. However, while low-mass stars are common and relatively easy to find in such clouds, it is much more difficult to find massive stars while they are in the very early stage of their evolution.

This is because massive stars are comparatively rare and pass through the different evolutionary phases much faster than low-mass and solar-like stars. They are usually found within dense stellar clusters, located at large distances from the Sun.

The earliest evolutionary stages of both low- and high-mass stars cannot be observed at visible wavelengths. This is due to the very heavy obscuration in that wavelength region by the dust in the parental molecular clouds. However, infrared and millimeter emission from these objects is able to penetrate the dust and thus allow us to investigate the complex processes that occur at the earliest phases of stellar evolution.

A search for massive stars in the formation stage

The best possible comprehension of this crucial stage of the stellar life cycle constitutes a key to the understanding of the formation and evolution of galaxies. And in this context, it is especially the massive stars with their powerful radiation fields, strong stellar winds and dramatic final interaction with the interstellar medium through supernova explosions that dominate the energetics of normal galaxies. Massive stars live much shorter (about 1 million years) than lighter solar-type stars (10 - 12,000 million years) and only they undergo such violent explosions at the end.

A most challenging question in current astrophysics is therefore concerned with the nature of the various physical processes that take place during the formation of massive stars. It is for instance still unclear whether massive stars form like lower-mass stars of the solar type do, i.e., by accretion of gas from the surrounding cloud during a progressive contraction process, or if they are rather the results of stellar collisions in dense clusters.

The only way to know is by finding the youngest massive stars and then to study them in detail by means of spectroscopic observations. At the same time, their immediate surroundings, e.g., the stellar population in the star-forming cluster of which they are members, must also be investigated before the full picture will emerge.

It is in this context that new infrared observations have been made of the inner regions of Messier 17. In the area to the south-west of the centre of this nebula, shown in ESO Press Photo eso0030a, several objects appear very red - this clearly identifies them as very young stars.

An infrared spectrum of one of the reddest objects that was only detected at the longest wavelength (the Ks band), confirmed it as a massive star in its earliest evolutionary phase.

The spectrum shows a featureless "continuum" that rises steeply towards long wavelengths, exactly as expected for a star in the process of formation, deeply embedded in dust. It is easily distinguishable from stars that have already formed, since their spectra display several absorption features and rise towards shorter wavelengths instead. 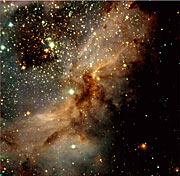 PR Image eso0030b
A massive star forming in M17
Send us your comments!
Subscribe to receive news from ESO in your language
Accelerated by CDN77
Terms & Conditions