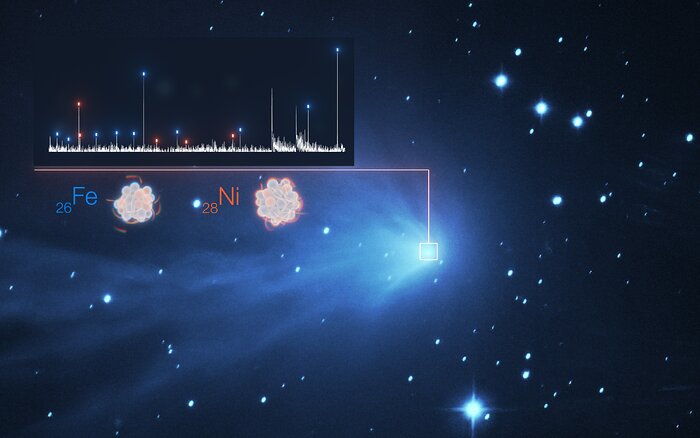 The detection of the heavy metals iron (Fe) and nickel (Ni) in the fuzzy atmosphere of a comet are illustrated in this image, which features the spectrum of light of C/2016 R2 (PANSTARRS) on the top left superimposed to a real image of the comet taken with the SPECULOOS telescope at ESO’s Paranal Observatory. Each white peak in the spectrum represents a different element, with those for iron and nickel indicated by blue and orange dashes, respectively. Spectra like these are possible thanks to the UVES instrument on ESO’s VLT, a high-resolution spectrograph that spreads the line so much they can be individually identified. In addition, UVES remains sensitive down to wavelengths of 300nm. Most of the important iron and nickel lines appear at wavelengths of around 350nm, meaning that the capabilities of UVES were essential in making this discovery.