The spectacular aftermath of a 360 million year old cosmic collision is revealed in great detail in new images from ESO’s Very Large Telescope at the Paranal Observatory. Among the debris is a rare and mysterious young dwarf galaxy. This galaxy is providing astronomers with an excellent opportunity to learn more about similar galaxies that are expected to be common in the early Universe, but are normally too faint and distant to be observed by current telescopes.

NGC 5291, the hazy, golden oval dominating the centre of this image, is an elliptical galaxy located nearly 200 million light-years away in the constellation of Centaurus (The Centaur). Over 360 million years ago, NGC 5291 was involved in a dramatic and violent collision as another galaxy travelling at immense speeds barrelled into its core. The cosmic crash ejected huge streams of gas into nearby space, which later coalesced into a ring formation around NGC 5291 [1].

Over time, material in this ring gathered and collapsed into dozens of star-forming regions and several dwarf galaxies, revealed as pale blue and white regions scattered around NGC 5291 in this new image from the FORS instrument, mounted on the VLT. The most massive and luminous clump of material, to the right of NGC 5291, is one of these dwarf galaxies and is known as NGC 5291N.

The Milky Way, like all large galaxies, is believed to have formed through the build-up of smaller dwarf galaxies in the early years of the Universe. These small galaxies, if they have survived on their own up to the present day, now normally contain many extremely old stars.

Yet NGC 5291N appears to contain no old stars. Detailed observations with the MUSE spectrograph [2] also found that the outer parts of the galaxy had properties typically associated with the formation of new stars, but what was observed is not predicted by current theoretical models. Astronomers suspect that these unusual aspects may be the result of massive collisions of gas in the region.

NGC 5291N doesn’t look like a typical dwarf galaxy, but instead it shares a striking number of similarities with the clumpy structures present within many of the star-forming galaxies in the distant Universe. This makes it a unique system in our local Universe and an important laboratory for the study of early gas-rich galaxies, which are normally much too distant to be observed in detail by current telescopes.

This unusual system has previously been observed by a wide range of ground-based facilities, including ESO’s 3.6-metre telescope at the La Silla Observatory [3]. However, the capabilities of MUSE, FORS and the Very Large Telescope have only now allowed some of the history and properties of NGC 5291N to be determined.

[2] NGC 5291N was observed using integral field spectrography during MUSE’s first Science Verification run. Integral field spectrography collects a spectrum at every point on the sky, providing a powerful three-dimensional view of the target. The MUSE observations revealed unexpected oxygen and hydrogen emission lines in the outskirts of NGC 5291N.

[3] NGC 5291 was studied by astronomers using ESO’s 3.6-metre telescope at the La Silla Observatory back in 1978. These observations revealed large amounts of material in the intergalactic space around the galaxy, which we now know to be the star-forming regions and several dwarf galaxies created from the collapse of the galaxy’s gaseous ring.

This research was presented in a paper entitled “Ionization processes in a local analogue of distant clumpy galaxies: VLT MUSE IFU spectroscopy and FORS deep images of the TDG NGC 5291N”, by J. Fensch et al., to appear in the journal Astronomy & Astrophysics.

PR Image eso1547a
The surroundings of the interacting galaxy NGC 5291 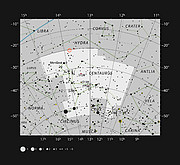 PR Video eso1547b
Close-up view of the surroundings of the interacting galaxy NGC 5291
Send us your comments!
Subscribe to receive news from ESO in your language
Accelerated by CDN77
Terms & Conditions