Atoms-for-Peace: A Galactic Collision in Action

European Southern Observatory astronomers have produced a spectacular new image of the famous Atoms-for-Peace galaxy (NGC 7252). This galactic pile-up, formed by the collision of two galaxies, provides an excellent opportunity for astronomers to study how mergers affect the evolution of the Universe.

Atoms-for-Peace is the curious name given to a pair of interacting and merging galaxies that lie around 220 million light-years away in the constellation of Aquarius. It is also known as NGC 7252 and Arp 226 and is just bright enough to be seen by amateur astronomers as a very faint small fuzzy blob. This very deep image was produced by ESO’s Wide Field Imager on the MPG/ESO 2.2-metre telescope at ESO’s La Silla Observatory in Chile.

A galaxy collision is one of the most important processes influencing how our Universe evolves, and studying them reveals important clues about galactic ancestry. Luckily, such collisions are long drawn-out events that last hundreds of millions of years, giving astronomers plenty of time to observe them.

This picture of Atoms-for-Peace represents a snapshot of its collision, with the chaos in full flow, set against a rich backdrop of distant galaxies. The results of the intricate interplay of gravitational interactions can be seen in the shapes of the tails made from streams of stars, gas and dust. The image also shows the incredible shells that formed as gas and stars were ripped out of the colliding galaxies and wrapped around their joint core. While much material was ejected into space, other regions were compressed, sparking bursts of star formation. The result was the formation of hundreds of very young star clusters, around 50 to 500 million years old, which are speculated to be the progenitors of globular clusters.

Atoms-for-Peace may be a harbinger of our own galaxy’s fate. Astronomers predict that in three or four billion years the Milky Way and the Andromeda Galaxy will collide, much as has happened with Atoms-for-Peace. But don’t panic: the distance between stars within a galaxy is vast, so it is unlikely that our Sun will end up in a head-on collision with another star during the merger.

The object’s curious nickname has an interesting history. In December 1953, President Eisenhower gave a speech that was dubbed Atoms for Peace. The theme was promoting nuclear power for peaceful purposes — a particularly hot topic at the time. This speech and the associated conference made waves in the scientific community and beyond to such an extent that NGC 7252 was named the Atoms-for-Peace galaxy. In many ways, this is oddly appropriate: the curious shape that we can see is the result of two galaxies merging to produce something new and grand, a little like what occurs in nuclear fusion. Furthermore, the giant loops resemble a textbook diagram of electrons orbiting an atomic nucleus. 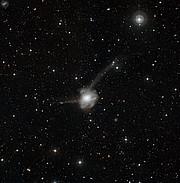 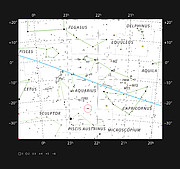 PR Image eso1044b
A galactic collision in the constellation of Aquarius 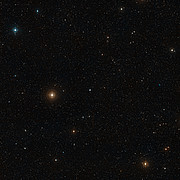 PR Image eso1044c
Wide-field view of the field around NGC 7252: the Atoms-for-Peace galaxy

PR Video eso1044a
Zooming in on Atoms-for-Peace: a galactic collision in action

PR Video eso1044b
Pan over Atoms-for-Peace: a galactic collision in action
Send us your comments!
Subscribe to receive news from ESO in your language
Accelerated by CDN77
Terms & Conditions