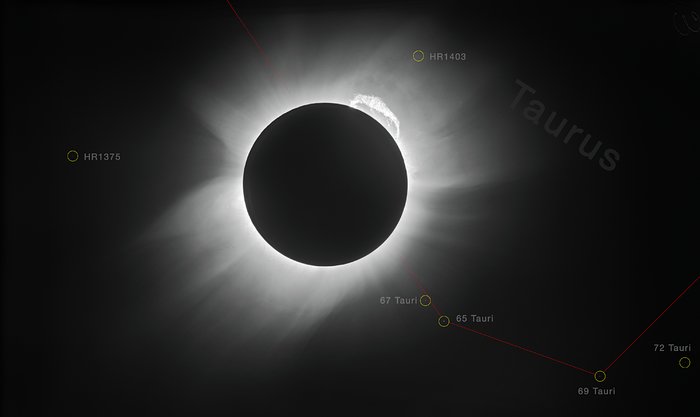 Almost exactly 100 years ago, a remarkable event occurred: a total solar eclipse. This eclipse was special in more ways than one. Firstly, at just under seven minutes in duration, it was the longest such eclipse in over 500 years. Secondly, it was used by astronomers to explore the then-new theory of general relativity — with successful and groundbreaking results.

Einstein published his general theory of relativity in 1915. The total solar eclipse of 1919 offered the perfect opportunity to test it experimentally, by exploring whether — and how — the immense gravity of the Sun bends and distorts incoming light from more distant stars, as predicted by Einstein’s theory. For a brief moment during the eclipse, the Moon would block the Sun’s light in the sky and make visible some of the stars that lie close to the line of sight of the Sun, not normally visible during the daytime. By measuring the positions of these stars during the eclipse and comparing them to their positions at night, when the sun is not in the field of view,  it would be possible to determine whether their light rays bends while passing close to the Sun.

Three astronomers — Arthur Eddington, Frank Watson Dyson, and Andrew Crommelin — played key roles in this 1919 experiment. Eddington and Crommelin travelled to locations at which the eclipse would be total — Eddington to the West African island of Príncipe, Crommelin to the Brazilian town of Sobral — while Dyson coordinated the attempt from England.

Eddington and Crommelin imaged the eclipse using the technology of the time: photographic plates made of glass. Sadly, the original plates from the 1919 expedition (one of which was reproduced in Dyson’s original paper) have been lost — but, luckily, copies of one of the plates were made and sent to observatories around the world to allow scientists everywhere to see the evidence in support of relativity with their own eyes. One copy of a plate from Sobral went to Landessternwarte Heidelberg-Königstuhl, who recently scanned theirs as part of the Heidelberg Digitized Astronomical Plates (HDAP) project [1].

The image shown here is arguably the highest resolution image of the 1919 eclipse, and is the result of applying modern image processing techniques — including image restoration, noise reduction, and removal of artifacts — to that plate copy (un-annotated version here). It unveils stunning details in the solar corona, a giant prominence emerging from the upper right part of the Sun, and stars in the constellation of Taurus (The Bull) that were used to confirm general relativity’s predictions [2].

[1] HDAP receives funding under grant No. 00.071.2005 of the Klaus Tschira Foundation. The original high-resolution scan before the digital restoration is provided here for historical purposes.

[2] Dyson’s original paper concludes with the paradigm-changing graph on p.332 plotting the displacements of the stars during the eclipse against their distance from the solar disc’s centre. This shows a clear relation (solid line) — the stars closer to the solar disc are deflected more than those further away, and by roughly the amount predicted by general relativity (twice that predicted by Newtonian theory, which is represented by the dotted line).