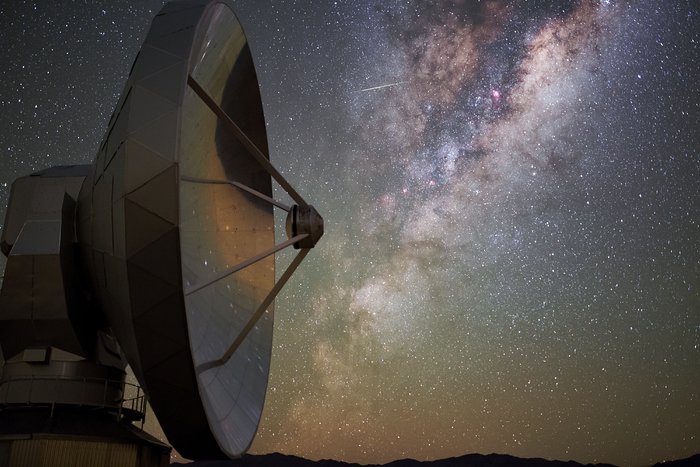 High up in the outskirts of the Chilean Atacama Desert, in the skies above ESO’s La Silla Observatory, a meteor blazes across the star-studded and dust-streaked Milky Way. This picturesque event had a silent, static onlooker, visible here to the left of the frame: the Swedish-ESO Submillimetre Telescope (SEST).

The SEST was built in 1987 on behalf of ESO and the Swedish Natural Science Research Council, and was decommissioned in 2003.For those 16 years it gazed up at some of the darkest and clearest skies in the world. At the time of construction, the 15-metre SEST was the only large telescope in the southern hemisphere designed for submillimetre astronomy.

While active, the SEST was used for a broad range of research, including observing the centre of the Milky Way, and studying our galaxy’s two satellites, the Magellanic Clouds. In 1995, SEST observations showed the Boomerang Nebula — a gas cloud formed by a dying star in the constellation of Centaurus (The Centaur) — to be the coldest known location in the Universe at only one degree warmer than absolute zero.