The colours of Antu 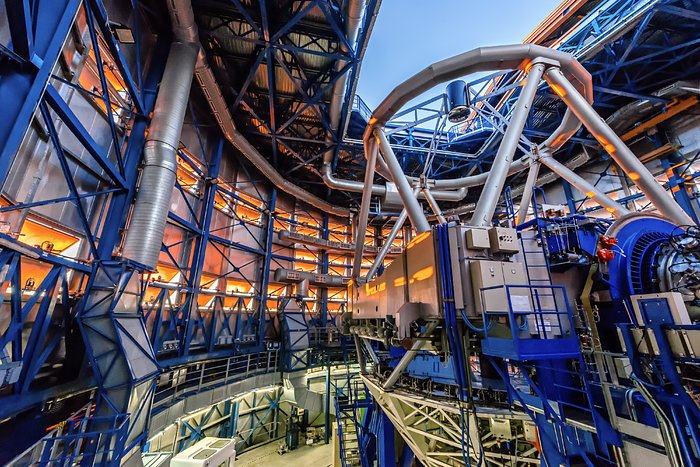 This photograph, taken by Vincenzo Forchi, provides a unique insight into one of ESO’s most famous — and hard-working — residents. This cacophony of colour, structure and machinery is the interior of the 8.2-metre Unit Telescope 1 (UT1) of ESO’s Very Large Telescope (VLT), at Paranal Observatory in northern Chile. UT1 is more charmingly named Antu, which means The Sun in the region’s indigenous Mapuche language. The other UTs are named after the Moon, the Southern Cross, and Venus — Kueyen, Melipal, and Yepun respectively.

Forchi’s image shows Antu as it blinks open its high-tech eye and prepares for a long night observing the cosmos. At the base of the building, artificial lights bathe the area with an incandescent yellow glow. Above, the blue and silver hues of the telescope’s metalwork are complemented by the warm orange embrace of the Sun’s final rays, which scatter off the numerous flaps, or louvres, that encircle the enclosure.

Vincenzo submitted this photograph to the Your ESO Pictures Flickr group. The Flickr group is regularly reviewed and the best photos are selected to be featured in our popular Picture of the Week series.