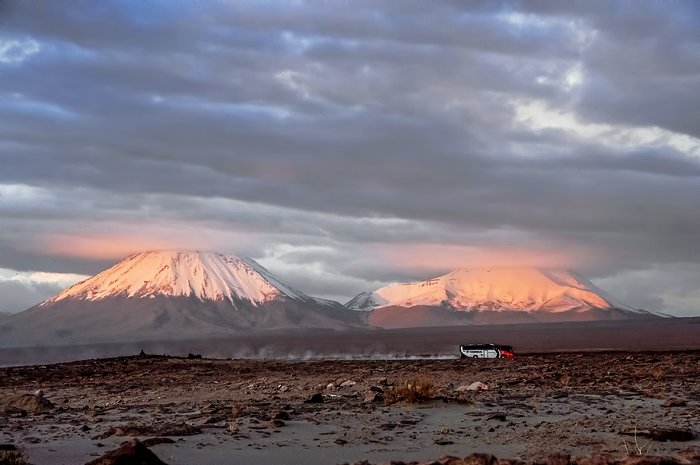 Close to ESO's ALMA Observatory, a tour bus creates a cloud of dust as it makes its way across the Chilean desert. This bus carries staff heading to the ALMA Operations Support Facility for the start of an 8-day shift. In the background we see two volcanoes, their snow-covered peaks obscured by clouds.

Located on the border between Bolivia and Chile, these two inactive volcanoes, despite being just a short distance from each other, were created in different geological epochs — Licancabur, the volcano on the left, is much younger than its smaller neighbour Juriques.

Licancabur is famous for its near-symmetrical shape, and for being home to one of the highest lakes in the world. At an altitude of 5916 metres, the lake in Licancabur’s caldera is host to a variety of rare flora and fauna, and has been studied to see how life is coping in this extreme environment. It is said that the Licancabur region is one of the best analogues for the Martian environment, and that by studying the life present here, we may better understand how life could flourish on other planets.

This image was taken by ESO's Armin Silber.