The southern Milky Way above ALMA 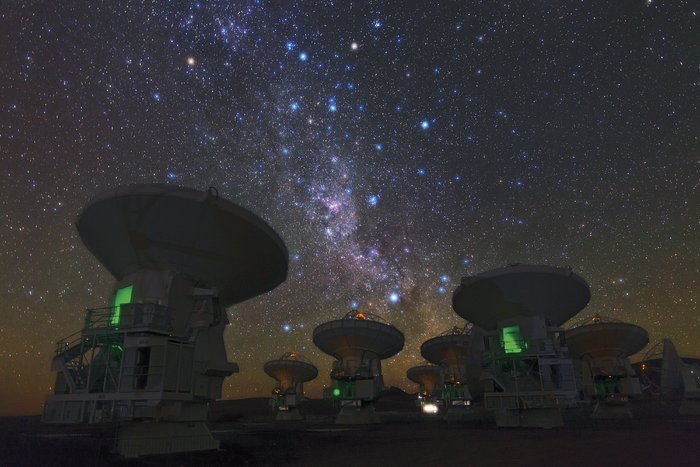 ESO Photo Ambassador Babak Tafreshi snapped this remarkable image of the antennas of the Atacama Large Millimeter/submillimeter Array (ALMA), set against the splendour of the Milky Way. The richness of the sky in this picture attests to the unsurpassed conditions for astronomy on the 5000-metre-high Chajnantor plateau in Chile’s Atacama region.

This view shows the constellations of Carina (The Keel) and Vela (The Sails). The dark, wispy dust clouds of the Milky Way streak from middle top left to middle bottom right. The bright orange star in the upper left is Suhail in Vela, while the similarly orange star in the upper middle is Avior, in Carina. Of the three bright blue stars that form an “L” near these stars, the left two belong to Vela, and the right one to Carina. And exactly in the centre of the image below these stars gleams the pink glow of the Carina Nebula (eso1208).

ESO, the European partner in ALMA, is providing 25 of the 66 antennas that will make up the completed telescope. The two antennas closest to the camera, on which the careful viewer can find the markings “DA-43” and “DA-41”, are examples of these European antennas. Construction of the full ALMA array will be completed in 2013, but the telescope is already making scientific observations with a partial array of antennas.

Babak Tafreshi is founder of The World At Night, a programme to create and exhibit a collection of stunning photographs and time-lapse videos of the world’s most beautiful and historic sites against a night-time backdrop of stars, planets and celestial events.