Exoplanet caught on the move 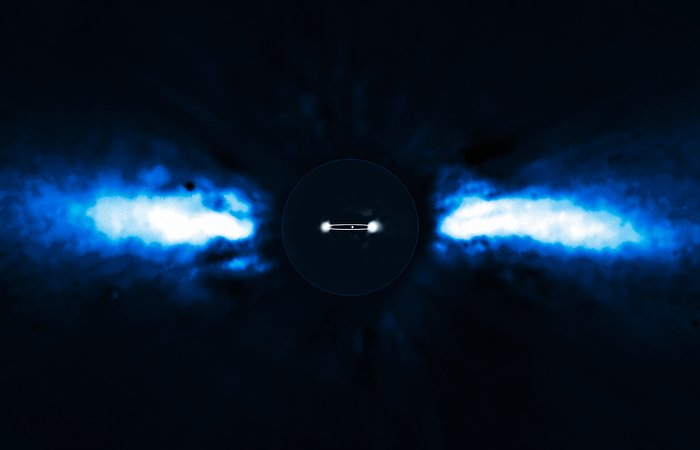 For the first time, astronomers have been able to directly follow the motion of an exoplanet as it moves to the other side of its host star. The planet has the smallest orbit so far of all directly imaged exoplanets, lying as close to its host star as Saturn is to the Sun.

The team of astronomers used the NAOS-CONICA instrument (or NACO), mounted on one of the 8.2-metre Unit Telescopes of ESO's Very Large Telescope (VLT), to study the immediate surroundings of Beta Pictoris in 2003, 2008 and 2009. In 2003 a faint source inside the disc was seen, but it was not possible to exclude the remote possibility that it was a background star. In new images taken in 2008 and spring 2009 the source had disappeared! The most recent observations, taken during autumn 2009, revealed the object on the other side of the disc after having been hidden either behind or in front of the star. This confirmed that the source indeed was an exoplanet and that it was orbiting its host star. It also provided insights into the size of its orbit around the star.

The above composite shows the reflected light on the dust disc in the outer part, as observed in 1996 with the ADONIS instrument on ESO's 3.6-metre telescope. In the central part, the observations of the planet obtained in 2003 and autumn 2009 with NACO are shown. The possible orbit of the planet is also indicated, albeit with the inclination angle exaggerated.