With the completed assembly of the heavy parts that form the mechanical structure of the first (UT1) of the four large VLT Unit Telescopes, the integration of the motor that will move the telescope around the (horizontal) altitude axis is now about to start.

In addition to the photos of the large altitude bearing and the shaft where the direct motor drive will be installed, this series also contains two views of the UT1 in its enclosure following the removal of the scaffolding needed for the mechanical assembly, as also two of the control building.

Please note that since these images were electronically recorded and were primarily obtained to document the VLT construction activities, they may not be of sufficient quality for all reproduction purposes. 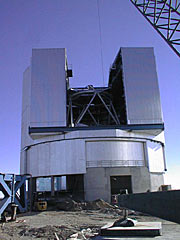 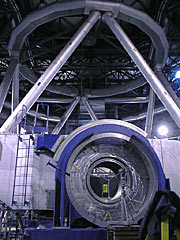