Behind the scenes at ESO: Showing you the road to the stars
What you’ll discover in this blog post:
As an ESO Fellow in Chile, Trystyn Berg uses our telescopes to answer big questions about the Universe. We catch up with him to find out more about his research, what he loves about being an astronomer, and what it’s like to observe the night sky from the Atacama Desert. 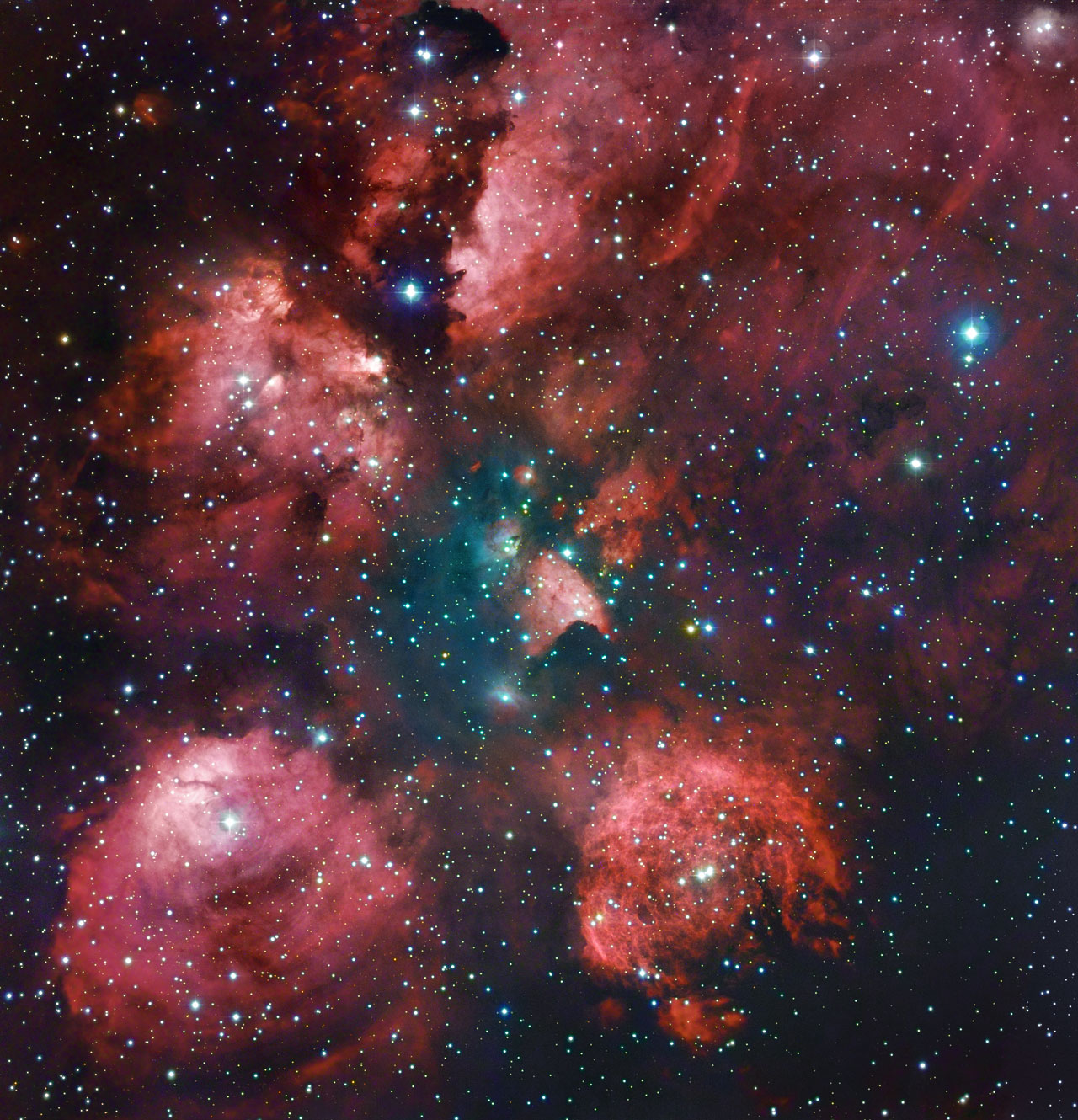 Q. Could you start off with an overview of what you are working on at ESO?

A. My research focuses on understanding how and why galaxies change across cosmic history; not all galaxies were born at the same time, and we see a large variety of life stages when we look into the distant Universe. Galaxies contain lots of gas in and between all their stars, and this gas is the life essence of the Universe. So I am mostly trying to figure out how galaxies process gas and how that affects their evolution.

Alongside my research, I am also one of the support astronomers for the second Unit Telescope of the Very Large Telescope (VLT) at Paranal Observatory. As a support astronomer, I work with the telescope operator to ensure the telescope is capable of performing the requested observations within the ambient weather conditions to push the system to its scientific limits.

In between observations or during the day, I write software and test the instruments to make sure the telescope-instrument system operates at its best. ESO Fellows can also choose to provide technical support for one or two instruments as an Instrument Fellow, which gives us an in-depth, more hands-on experience with the amazing ESO instrumentation. I am fortunate to be one of the instrument fellows for the VLT’s ESPRESSO instrument.

Q. So how would you summarise your research in one question?

A. The one question would be: "How can signatures in the gas of galaxies be used to understand galaxy evolution?"

Q. Why do you think this topic is important?

A. Stars are born out of cold gas, they process their gas while evolving within a galaxy, and then release this processed gas back into the Universe when they die. This means that the life cycle of stars and galaxies depends on the amount and types of gas they have in their nearby reservoir. And if a significant amount of gas is removed from a galaxy, new stars can no longer form, so the galaxy grows old and “dies”. Since we don't understand the details of how galaxies stop forming stars, it's important to look at their gas content which is very sensitive to the underlying astrophysics of galaxy evolution. 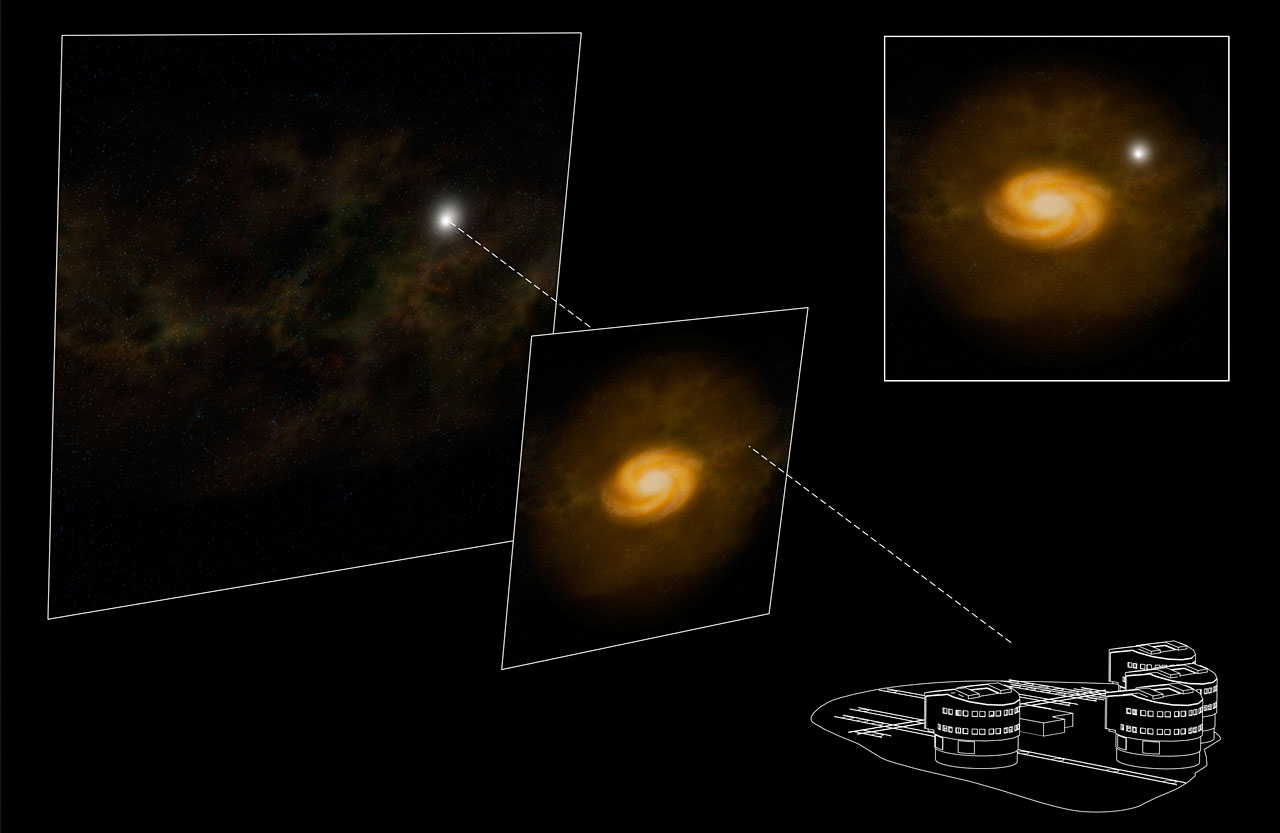 Artist’s impression of a quasar shining through an intervening galaxy before being detected by ESO’s VLT.
Credit: ESO

Q. How exactly do you find out more about the gas in galaxies?

A. I look at bright and distant quasars to sample all the gas between us and the quasars, most of which is in and around galaxies. As a quasar’s light passes through the gas, each element from the periodic table absorbs light at specific wavelengths. This leaves a “fingerprint” on the quasar light we observe that tells us how much of each element there is in the intervening gas. It also tells us about other things, like the temperature and bulk movement of the gas within the galaxy. I try to match up these measured quantities with theories of physical and chemical processes in galaxy evolution, to answer questions like: “what do the first stars look like?” or “how much gas is available to form stars over cosmic time?”

Q. And how and why are you using ESO telescopes to do this?

A. As quasars are so faint, I rely on large telescopes with very sensitive spectrographs that split light up to accurately measure these gas abundances. ESO’s VLT is one of the largest optical telescopes on Earth and has two amazing spectrographs that provide a unique view of quasar light, so I get most of my data from them.

The VLT is one of the largest optical telescopes on Earth and has two amazing spectrographs that provide a unique view of quasar light. 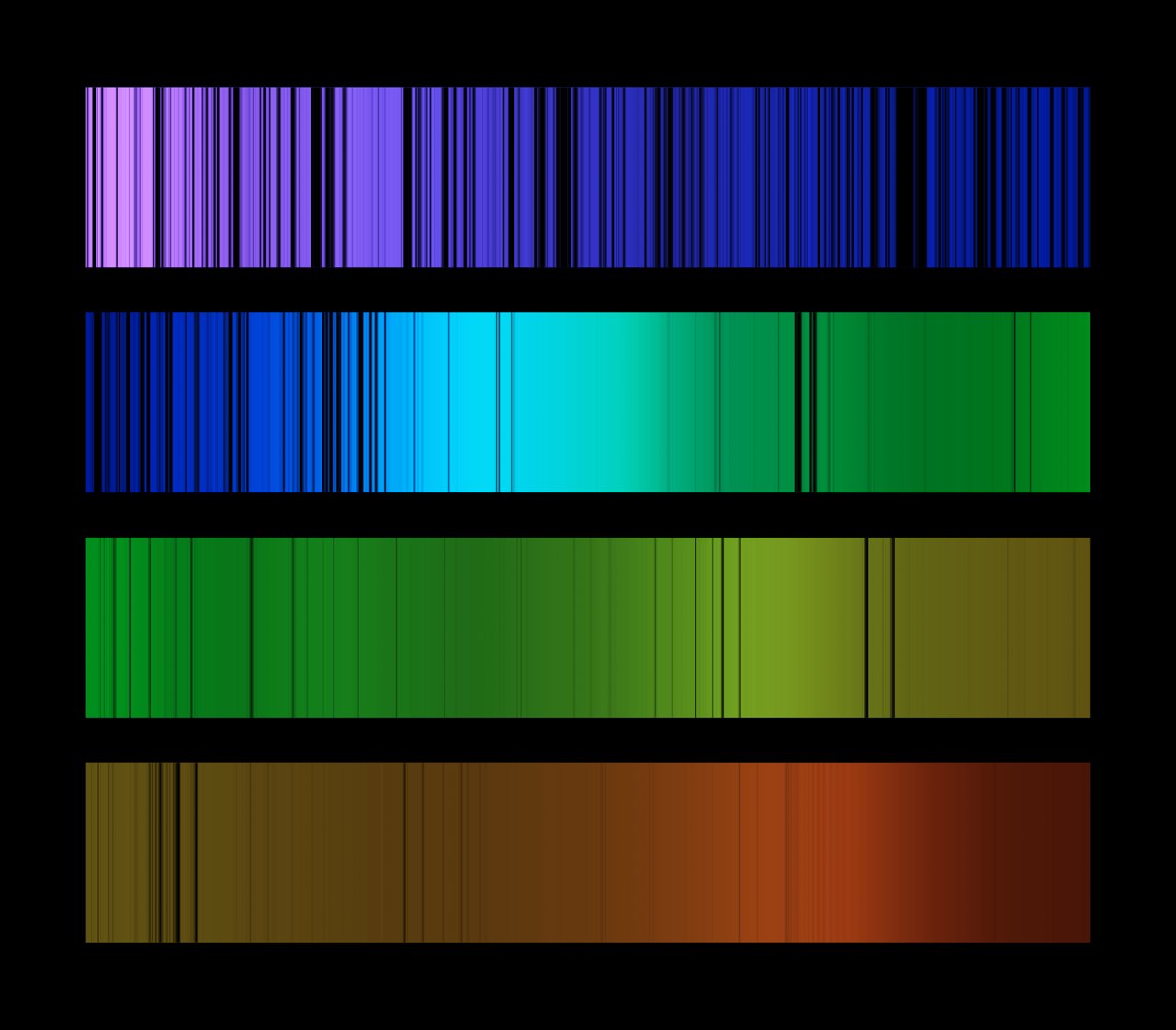 UVES spectrum of light from a quasar that has travelled through gas. Black absorption lines show where the light has been absorbed by the gas.
Credit: ESO

X-Shooter is a very sensitive spectrograph that covers a large range of wavelengths. This gives us a lot of information about where the gas is in the Universe, both in space and time (the further it is from Earth, the further back in time we are looking), and what the gas is made of.

Once I have the data from X-Shooter, I use the much higher resolution UVES spectrograph to follow up on the most interesting gas reservoirs, to precisely measure the amounts of specific elements, for example carbon, iron, zinc or oxygen. This allows me to try to answer specific questions, for example what exactly the very first stars were made of.

Q. Have you found out anything ground-breaking or surprising so far?

A. One of the current hot topics in astronomy is understanding how certain galaxy evolution processes prevent later star formation. One of these processes is the relatively quick growth of the massive black holes at the centre of some galaxies. Whilst the black hole grows, the environment surrounding it emits lots of energy. This should heat up the gas, causing it to escape from galaxies that would otherwise form stars. 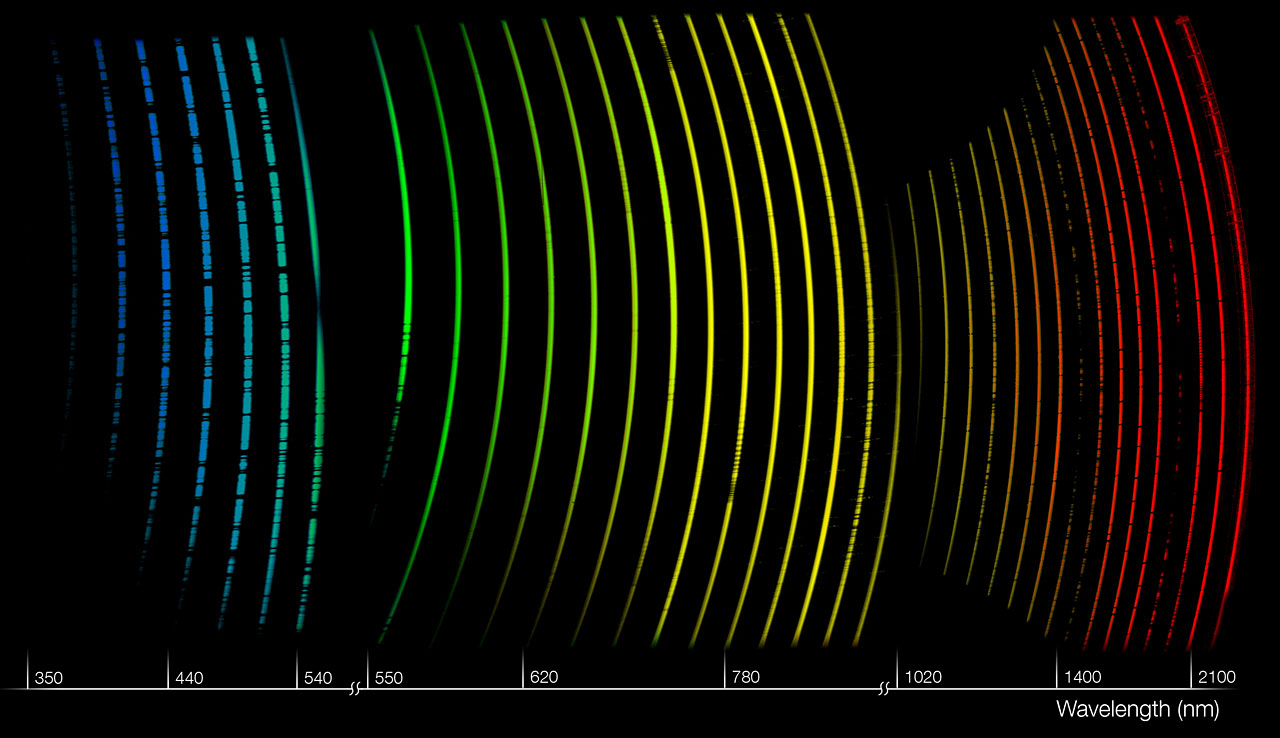 An X-Shooter spectrum of a distant quasar.
Credit: ESO

During my PhD, I used the Hubble Space Telescope to look at light from quasars to probe the nature of the gas surrounding galaxies hosting this active black hole growth, expecting to find the gas either removed or heated up because of the black hole. However, we found a surprisingly large amount of cooler gas instead. It's not completely clear what causes this, but we suspect that this cooler gas came from a galaxy evolution process that also started the black hole growth (such as a large surge in the amount of star formation, like a starburst), or that these types of galaxies are in gas-rich regions of the Universe.

Q. Does your work require you to spend much time onsite at Paranal Observatory? What is it like to work and sleep in the Atacama Desert?

A. I live in Santiago, the capital of Chile, and travel to Paranal about once a month to support not just UVES, ESPRESSO and X-Shooter but also the FLAMES spectrograph. In the Atacama Desert, where the telescopes are situated, it is very hot during the day from the direct sunlight, and dry all the time; together with the red-coloured mountains this makes it feel like living on Mars!

Fortunately, the lack of humidity doesn't affect my sleep (partly because my home town is very cold and dry in winter so I'm somewhat used to dealing with dry environments). However, there is always some effective “jet lag” when changing from regular day-life to astronomer night-life, which takes some getting used to every trip. This affects my sleeping schedule, as well as how well I am able to think late into the night!

Q. What made you want to become an astronomer?

A. Growing up, I always had an affinity for maths and science, but it wasn't until reading and watching 2001: A Space Odyssey and doing some follow-up research up on Saturn and Jupiter and their moons that I became fascinated with Europa and its potential to host life. After that, I wanted to study astronomy and geophysics at university; and in the end astronomy won out.

Q. What is your favourite thing about being an astronomer?

A. I enjoy the challenge of finding different ways to approach unknown questions, and designing methods to properly address those questions. In astronomy, the galaxy evolution processes are typical much longer than a human lifetime, so we have the additional challenge of designing observational experiments to studying events that are effectively frozen in one instance of their lives.

Q. What five words would you use to describe the life of an astronomer?

A. This may be a bit cliche, but I would say: investigating, programming, googling, communicating, and demanding.

Originally from Edmonton, Canada, Trystyn did all of his post-secondary education at the University of Victoria, getting his PhD in 2018 under the supervision of Dr. Sara Ellison. Throughout his studies (particularly as an undergraduate), Trystyn gained experience working at various observatories and has been involved with software development for several upcoming instruments, something he is hoping to build upon at ESO. When not working, Trystyn always seems to end up curling, hiking, golfing, or just playing board games at home.