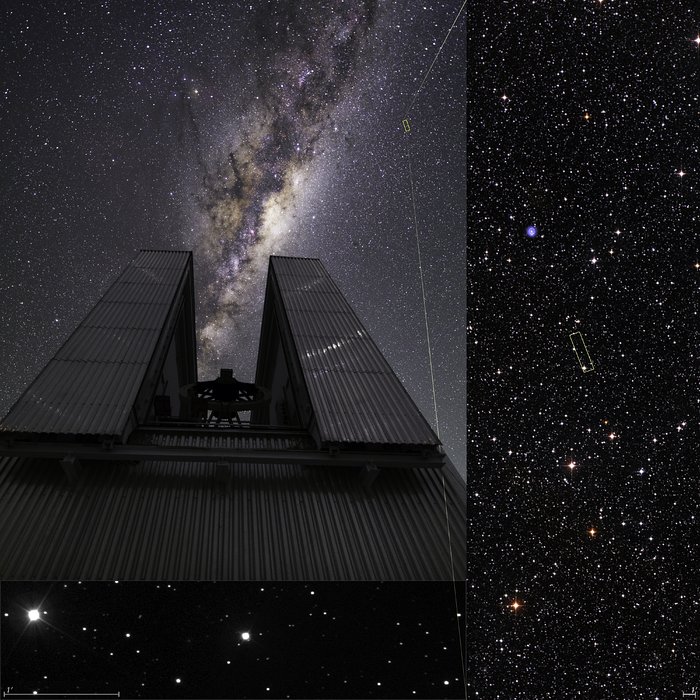 The Milky Way contains hundreds of billions of stars. However, the star at the centre of this image still manages to be very unusual — no mean feat!

A Brazilian–American team led by Jorge Melendez, from the University of São Paulo used two of ESO’s telescopes in Chile to discover that this star, named 2MASS J18082002–5104378, is a rare relic from the Milky Way’s formative years. As such, it offers astronomers a precious opportunity to explore the first stars that sprung to life within our galaxy.

2MASS J18082002–5104378 was spotted in 2014 by ESO’s New Technology Telescope (NTT). Follow-up observations using ESO’s Very Large Telescope (VLT) discovered that, unlike younger stars such as the Sun, this star shows an unusually low abundance of what astronomers curiously call metals — elements heavier than hydrogen and helium. In fact, it is so devoid of these elements that it is known as an UMP, or an ultra metal-poor star — the brightest ever discovered!

Although thought to be ubiquitous in the early Universe, metal-poor stars are now a rare sight within both the Milky Way (eso1132) and other nearby galaxies. Metals are formed during nuclear fusion within stars, and are spread throughout the interstellar medium when these stars grow old and explode. Subsequent generations of stars therefore form from increasingly metal-rich material. Metal-poor stars, however, formed from the unpolluted environment that existed shortly after the Big Bang. Exploring stars such as 2MASS J18082002–5104378 may unlock secrets about their formation, and show what the Universe was like at the very beginning.