Winners of Insight Astronomy Photographer of the Year 2019 announced

The winners of Insight Astronomy Photographer of the Year 2019 were announced at an award ceremony at the National Maritime Museum on 12 September 2019. The photographs will be showcased in an exhibition at the museum from 13 September. ESO joined the competition in 2016 by contributing a judge and further spreading the word about the competition among its community.

The overall winner of the Insight Astronomy Photographer of the Year 2019 competition is Hungarian photographer László Francsics who takes home a prize of £10 000. Francsics with his ‘Into the Shadow’ image captivated and astounded the judges. Taken in Budapest, Hungary, the photograph depicts a creative and artistic composition of the 35 phases of the total lunar eclipse that occurred on 21 January 2019.

Competition judge Ed Robinson said: “For a single multiple-exposure image to capture this event with such positional precision, creative innovation and beauty is nothing short of masterful. Not only are the colours of our atmosphere projected onto the Moon’s disc during the eclipse artistically pleasing but they also offer an understanding of such events that can reveal aspects of our own, thin, yet essential atmosphere. In a year that celebrates 50 years since the first lunar landings it is fitting that this year’s overall winning image captures such a dynamic and captivating view of our Moon. A worthy winner indeed. Judge Oana Sandu from ESO added: “The original composition, the quality of the shots themselves, and the chromatic and visual impact, all make for a photograph that will catch the viewer's eye and interest.”

The winners of all the categories are:

Young Astronomy Photographer of the Year

The Insight Investment Astronomy Photographer of the Year competition is run by the Royal Observatory Greenwich in association with Insight Investment and BBC Sky at Night Magazine. ESO is supporting the competition by providing a judge and promotion efforts. Now in its eleventh year, the competition received a record number of over 4600 entries, taken from 90 countries across the globe. This year, for the first time since the launch of the Special Prize: The Sir Patrick Moore prize for Best Newcomer category, the judges have chosen two joint winners, reflecting the high standard of images received.

These exceptional photographs — winners, runners-up and highly commended — are showcased, alongside a remarkable selection of 68 shortlisted images, in the major Insight Investment Astronomy Photographer of the Year exhibition at the National Maritime Museum, opening to the public from 13 September 2019.

For the second year, admirers and enthusiasts of astrophotography can start voting, online and in the exhibition, for the Insight Investment Astronomy Photographer of the Year: People’s Choice Awards 2019 and choose their favourite image out of 24 preselected by the competition team. The winners will be announced in February 2020. 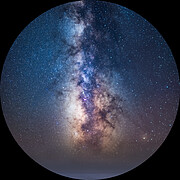