Behind the scenes at ESO: Showing you the road to the stars
What you’ll discover in this blog post:
Earlier this week, we announced the discovery of phosphine in the atmosphere of Venus. On Earth, this molecule is made only industrially or by microbes, raising two possibilities: either we’ve detected evidence for microbial life on Venus, or there is another process at play that we’ve never seen on Earth. To find out more about the implications of this discovery, we speak to Leonardo Testi, ESO astronomer and European Operations Manager of the Atacama Large Millimeter/submillimeter Array (ALMA), the telescope used to confirm the finding.

Q. According to our current understanding of phosphine chemistry, it is not possible for phosphine to be produced in a non-biological process on Venus. Does this mean that we’ve found evidence for life on Venus?

A. On Earth, phosphine is quite abundant in the atmosphere, but it is produced by biological processes — either directly by lifeforms or through human activity. Based on what we know about the process of producing and maintaining phosphine on Earth, the amount detected by the James Clerk Maxwell Telescope (JCMT) and ALMA in Venus's atmosphere can’t be explained by models that don’t include some kind of biological production.

In giant planets, the chemistry in the atmosphere is different, and phosphine is produced through non-biological processes. But in rocky planets like Venus, the amount discovered in this study shouldn't in principle be there, unless there are biological processes or some kind of production mechanism that we don't have on Earth, for example, Venus's volcanoes may be releasing the molecule.

This is very exciting because there is a lot of discussion about whether very simple lifeforms could exist in Venus's hazy clouds. If this is possible, it could be that some form of life is producing the phosphine.

An artist´s impression of Venus, showing phosphine molecules in the atmosphere.
Credit: ESO/M. Kornmesser/L. Calçada & NASA/JPL/Caltech
Why life has chosen phosphorus as such a vital element is a fascinating astrobiological question and we don´t have a definitive answer.

Q. Phosphine is a molecule made up of a phosphorus atom and three hydrogen atoms. Why should we care about molecules that contain phosphorus? What’s special about them?

There are two important ways in which phosphorus-bearing molecules are relevant to life. The first is that phosphorus is needed to form biological molecules, and the second is that certain forms of phosphorus-bearing molecules are produced by life. The second case is the subject of this study, as, on Earth, phosphine is mostly produced by life. Why life has chosen phosphorus as such a vital element is a fascinating astrobiological question and we don't have a definitive answer. 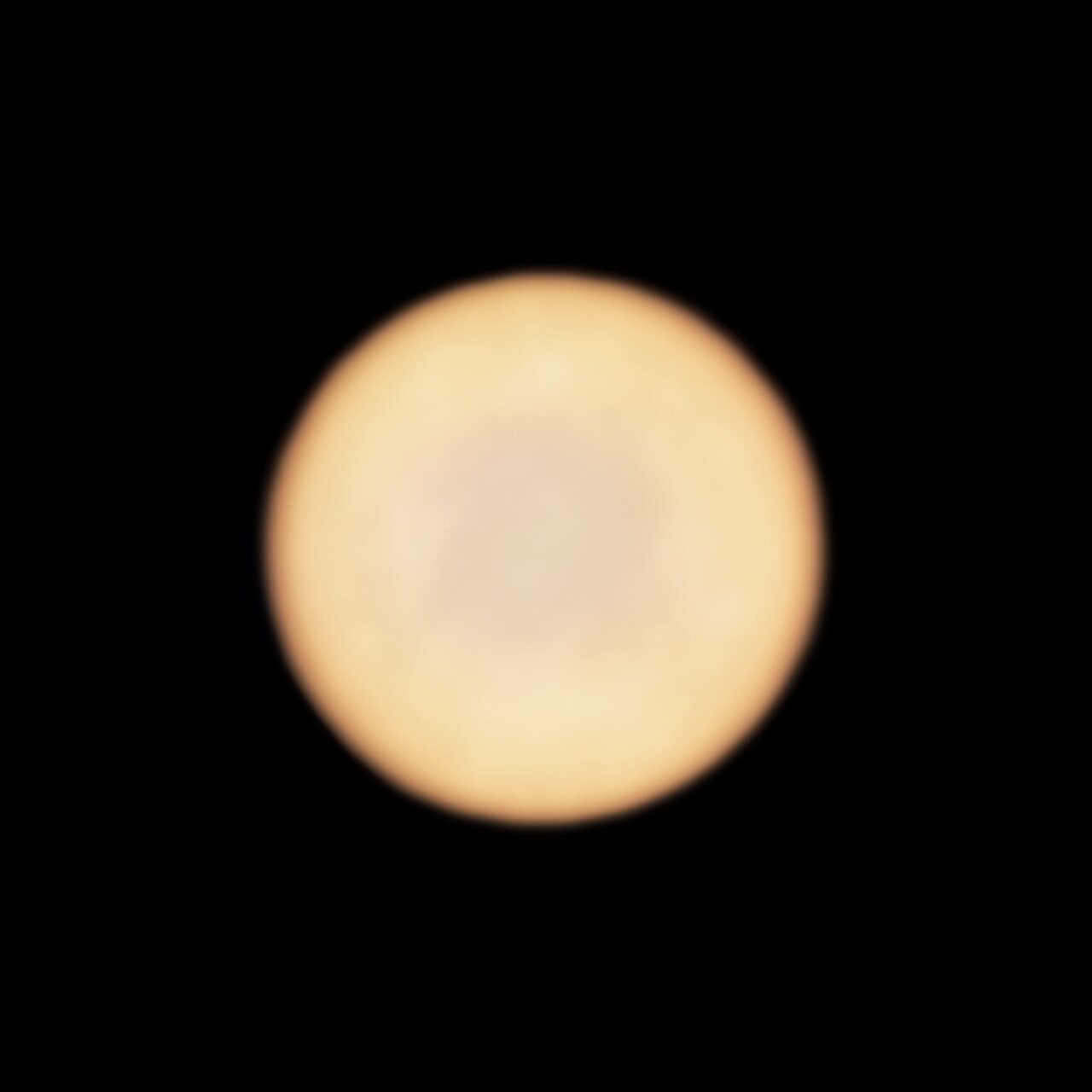 As an interesting side note, the phosphorus element is named after the Greek word “Φωσφόρος”, the morning star, which was used to indicate the morning appearance of Venus in the sky. The reason for this name is the high reactivity of phosphorus, which glows when it is exposed to oxygen.

Q. How did you feel when you first heard about this result?

A. Very excited! This is a study that looks at a molecule that is potentially an output of life, based on our current understanding. It is believed to be a biomarker — an indicator of the presence of life on other planets — so it is important to understand whether the presence of this phosphine is due to life or some other process.

It's also an exciting result for ALMA. One goal of the telescope was to study the chemistry of complex organic molecules that lead eventually to life. For example, ALMA has been and is still being used to look for the presence of molecules that are the building blocks of life in young solar analogues.

Q. So could this discovery imply that phosphine isn't a good biomarker after all?

Q. How and why is ALMA important in this field of research?

A. ALMA is one of the key research infrastructures that contribute to our understanding of the development of the chemistry leading to biotic or prebiotic molecules.

ALMA is a very good telescope for observing two types of environments: the atmospheres of planets in our own Solar System and, in young solar analogues, cold molecular gas that is present during the planet formation phases. Using ALMA to study the chemical composition of planetary atmospheres is reasonably easy for planets in the Solar System but more tricky for much fainter exoplanets. So at this stage we do not expect to study exoplanet atmospheric compositions with ALMA directly.

ALMA, which sits 5000 metres above sea level on the Chajnantor plateau in the Chilean Andes. The array consists of 66 high-precision antennas.
Credit: ESO/S. Guisard (www.eso.org/~sguisard)

It is possible to use ALMA to study cold gas around young Sun-like stars where planets are forming because the gas is very cold and emits effectively in the low-energy microwave part of the spectrum. This is exactly the kind of light that ALMA is designed to look at. So in this way, ALMA can be used to look for complex organic molecules and perhaps prebiotic molecules. 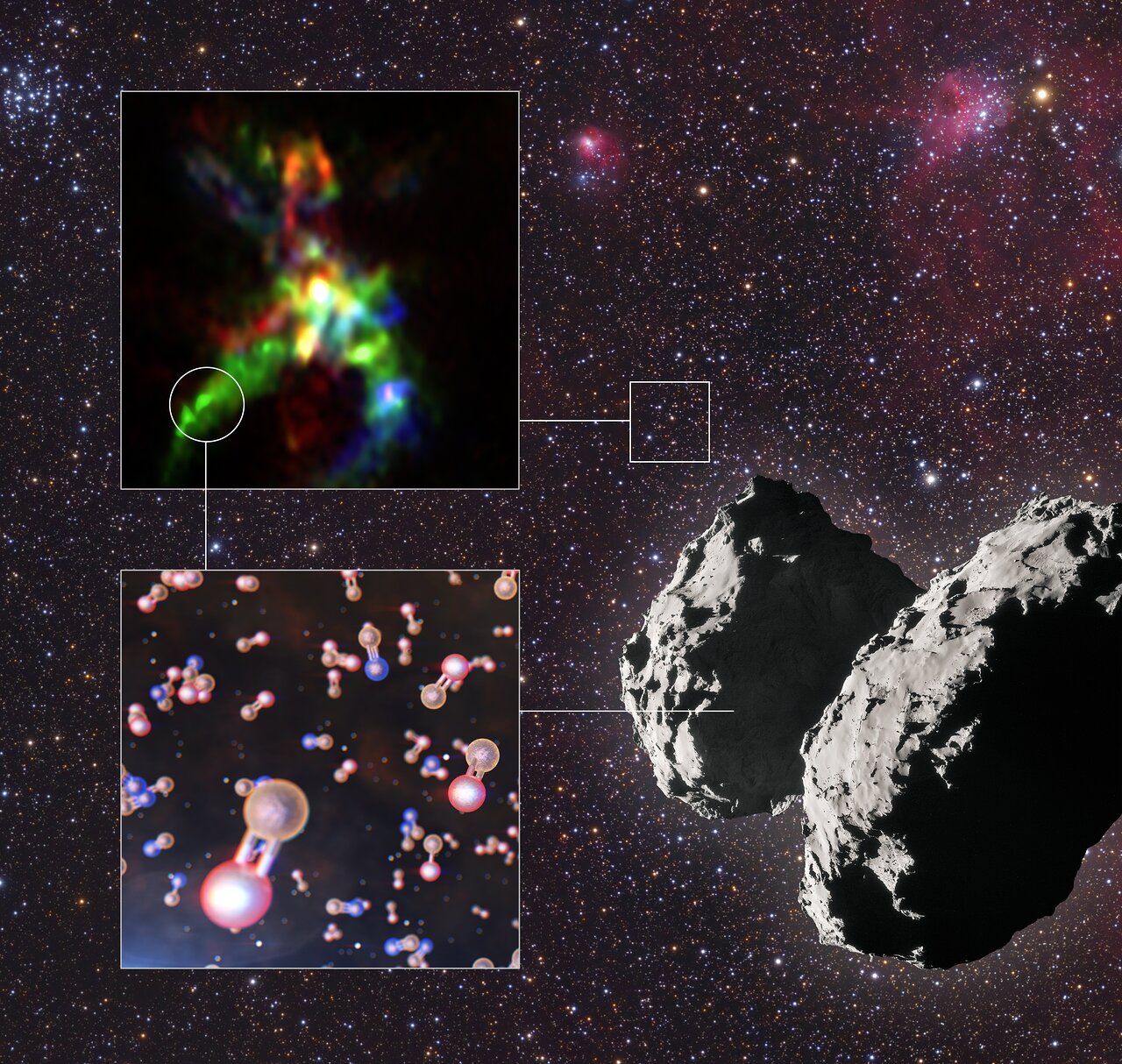 Q. Has ALMA been used for any other studies of molecules that contain phosphorus?

A. Yes, specifically to search for phosphorus monoxide and phosphorus mononitride, two simple molecules that are expected to be the major gas-phase phosphorus reservoirs. There have been some studies looking for these in young Sun-like systems, trying to understand how abundant the molecule is in these environments.

Recently a team of scientists compared the abundance of phosphorus monoxide in star-forming regions and in comet 67P/Churyumov-Gerasimenko, which was visited by the European Space Agency’s Rosetta mission. They found that the abundance observed in the comet — representative of the original abundance in the Solar System — is similar to the abundance observed around the young Sun-like stars. This shows that this basic building block for life is available throughout space, but we need more studies in this area to try to understand this better.

Q. Do you think ALMA will be used to follow up on this discovery of phosphine in Venus’s atmosphere? If so, in what way?

A. Absolutely. ALMA might first be used to check whether the abundance of phosphine is constant, or whether it varies over time. Another possibility is to use the telescope to study other molecules in Venus’s atmosphere, which may be connected to phosphine production or destruction.

It is a bit early to claim the discovery of life, but we definitely need to follow-up this phosphine detection to understand its origin!

Aside from ALMA, since Venus is nearby, and we know the atmospheric conditions quite well, we need to experimentally try to understand (in the laboratory for example) whether some of the production pathways of phosphine are really effective or not, and develop more complex models to understand the chemistry of phosphine in Venus’s atmosphere. In the long-term future, I think it would be important to go to Venus with a spacecraft, either to do chemical analysis on site or collect samples to bring back to Earth.

Q. Lastly, if there was life on Venus, what do you think it would look like?

A. (Leonardo laughs) It’s difficult to imagine, but probably microscopic bacteria-like organisms. Something very basic but still alive in the sense of what we consider to be alive on Earth. Finding such life on Venus would be a huge breakthrough: the first time discovering life outside Earth. It is a bit early to claim the discovery of life, but we definitely need to follow-up this phosphine detection to understand its origin!

ESO astronomer Leonardo Testi leads the European ALMA Support Centre, which involves taking care of the ALMA operations, maintenance and development in Europe. Scientifically, he is mostly interested in star and planet formation, as well as complex molecules. Together with three colleagues in France, Italy and Germany, he has recently been awarded a European Research Council grant with the goal of understanding the diversity of initial conditions for star and planet formation throughout our Galaxy. In his free time, Leonardo likes to explore the diversity of life and environments of our own planet, from the depths of the sea to the top of the mountains.