Behind the scenes at ESO: Showing you the road to the stars
What you’ll discover in this blog post:
Using the HARPS instrument on the ESO 3.6-metre telescope, a team of scientists recently carried out the largest ever search for thorium in stars that are almost identical to the Sun: solar twins. The presence of thorium is an indicator that any rocky planets around these stars may host plate tectonics, which can trigger and support life. We speak to two of the scientists involved in this search to find out whether these results have strengthened the claim for the existence of life elsewhere in the Milky Way.

Q. Firstly, what is a solar twin and why are they so interesting to study?

Andre de Castro Milone (AM): Solar twins are stars that are very similar to the Sun, for example in temperature, luminosity and chemical make-up. It is likely that the birth and evolution of these stars were also similar to the Sun’s birth and evolution, implying that planets may have formed around them in a similar way to how the planets formed in our own Solar System. This means that solar twins could be great places to start our search for life elsewhere in the Universe.

Q. In this study you looked at the amount of thorium in 53 solar twins. Why thorium?

AM: We looked at one specific type of radioactive thorium (Th-232). On Earth, the decay of such radioactive elements creates a heat flow in the convective mantle under the surface, which causes the tectonic plates on the surface to move. This makes Earth a geologically dynamic planet with earthquakes and volcanoes that contribute to the carbon cycle that regulates the temperature of the atmosphere.

Artist’s impression of a geologically active planet, on which a convective mantle and plate tectonics contribute to a carbon cycle.
Credit: Melissa de Andrade Nunes (IAG/USP)

Jorge Luis Melendez Moreno (JM): As a stable atmosphere is closely related to the emergence and evolution of life, this means that the initial amounts of certain radioactive elements in a rocky planet contribute significantly to a planet’s ability to host life. Thorium is one of these elements that can be instrumental to the presence of life. It decays very slowly, meaning that it creates a gentle heat flow for a very long time, giving life a chance to thrive.

Solar twins could be great places to start our search for life elsewhere in the Universe.

Q. So why were you looking for thorium in the stars rather than in the planets themselves? 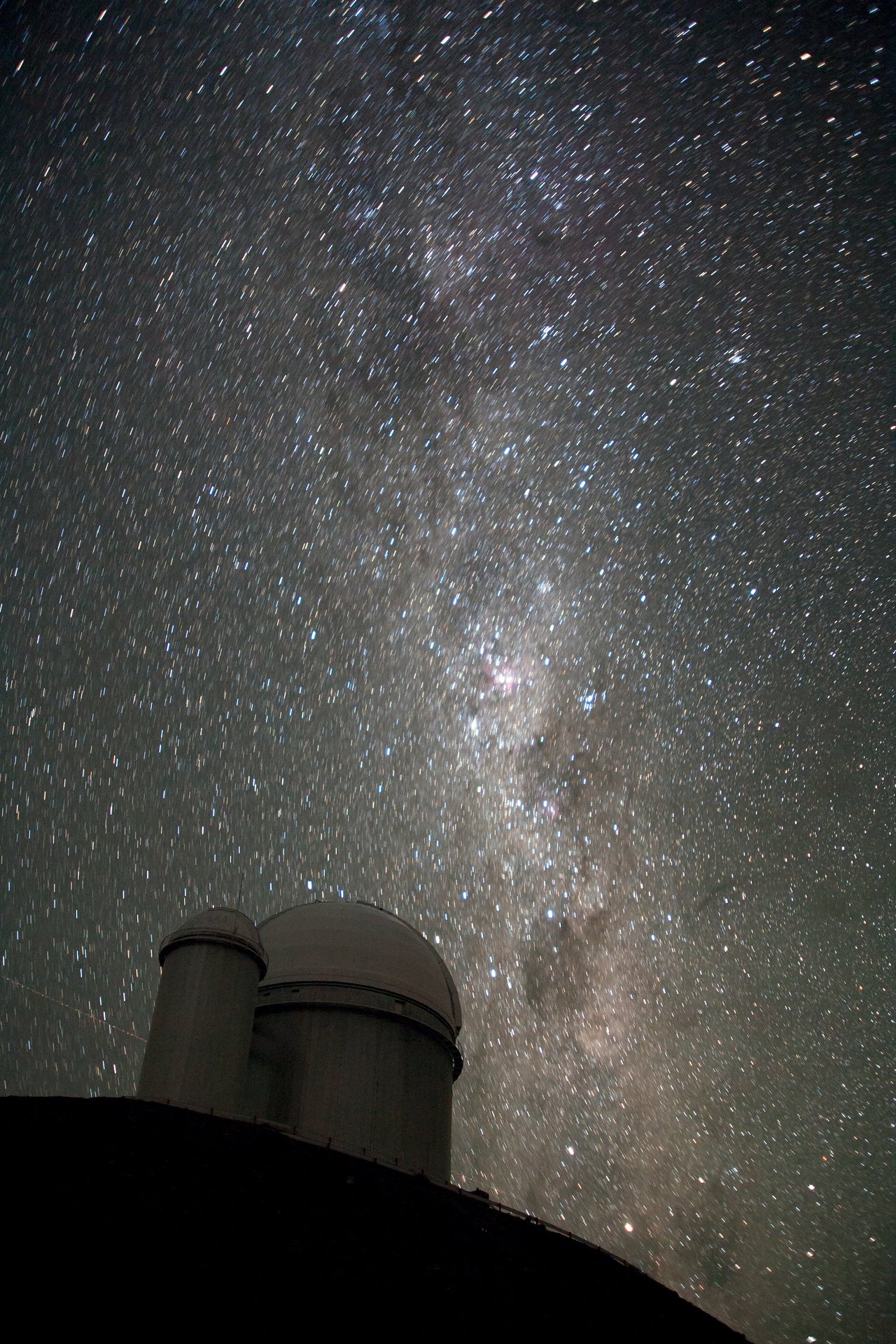 The Milky Way over the ESO 3.6-metre telescope.
Credit: ESO/A.Santerne

Q. How exactly did you measure the amount of thorium in the stars?

AM: We used the HARPS instrument on the ESO 3.6-metre telescope to capture very high-quality optical spectra from each star. Solar twins look white-ish from here on Earth, but HARPS can spread out the light into a spectrum to allow us to see that they actually emit light of a whole range of colours, or wavelengths. Each element in a star absorbs light at specific wavelengths, so spectra can be used to find out what elements are present. Using the spectra, we could make an estimation of how much thorium is currently in each star and knowing the rate of radioactive decay, we could estimate how much thorium was in each star when it formed.

This strengthens the argument that life could exist elsewhere in the Milky Way.

Q. And were you surprised by the amount of thorium you found in each star?

JM: We didn’t really have an expectation about how much thorium might exist in solar twins, because a large study like this one had never been carried out before. So it would be more appropriate to say we were “excited” by what we found, rather than “surprised”.

AM: It’s helpful to use the Sun as a comparison here, which is made up of mostly hydrogen atoms. In the Sun, there is just one thorium atom for every one trillion hydrogen atoms — that’s one with twelve zeros after it! We found that the amount of thorium varied in solar twins, but that it is 0.76–1.81 times as high as it is in the Sun, so about 1–2 thorium atoms for every trillion hydrogen atoms. Interestingly, we calculated that the thorium in the solar twins when they formed would have been about 1.09–1.37 times the initial thorium content of the Sun. This suggests that there could be plenty of thorium in any surrounding rocky planets, so they could be even more geologically active than Earth! This strengthens the argument that life could exist elsewhere in the Milky Way.

JM: Possibly the most exciting thing is that we found thorium in stars with a variety of ages, meaning that life might be spread around not only in space, but also in time. There might be some really young life or some ancient life out there in the galaxy!

The spectrum of the Sun, with light spread out into separate wavelengths. Black lines show where light is absorbed by specific elements. One of the lines in the blue-violet region corresponds to the thorium that was studied in this investigation.
Credit: N.A.Sharp, NOAO/NSO/Kitt Peak FTS/AURA/NSF
If we find enough solar twins, with enough geologically active planets around them, then we are likely to eventually find one that hosts life.

Q. Planets with atmospheres have already been discovered using other techniques. Why is this particular technique useful?

JM: Indeed, lots of planets with atmospheres have been detected, but we still don’t know of any Earth-like planets around solar twins because other techniques are currently not able to detect them. Future telescopes such as the Extremely Large Telescope (ELT) will be capable of searching for signs of life on Earth-like planets around some stars, but unfortunately not Sun-like stars because it would take about a century to look at their atmospheres in sufficient detail.

Mars, seen by the Hubble Space Telescope. Mars has a very thin atmosphere and no sign of ongoing geological activity.
Credit: NASA/ESA, J. Bell (Cornell U.) and M. Wolff (SSI)

AM: Atmospheres are also not sufficient for life. Take Mars, for example. It has an atmosphere (which is thin due to its low surface gravity and lack of magnetic field) but no sign of current geological activity. Venus, on the other hand, shows signs of geological activity, but the atmosphere is extremely dense, with an out-of-control greenhouse effect. This was caused by an irreversible process — perhaps the evaporation of a huge amount of liquid water — and has led to Venus becoming unsuitable for life as we know it. Both Mars and Venus were of course formed around the same thorium-rich Sun as Earth was.

So the existence of thorium on a planet is just one point in favour of the existence of life. Lots of other factors are involved that determine whether or not life is likely. But I believe that if we find enough solar twins, with enough geologically active planets around them, then we are likely to eventually find one that hosts life.

Q. So would you like to use the ELT to carry out follow-up research?

JM: We’d love to! The next step is to really look for planets around these solar twins. We have been using smaller telescopes such as the ESO 3.6-metre, and more recently have been observing solar twins with the Very Large Telescope. But later on, we would next like to use the ELT and even space telescopes to get a clearer picture of planets around solar twins and potentially find Earth 2.0!

Until then, our main focus is on characterising the fundamental properties of solar twins, in particular their chemical composition and magnetic activity cycles, as those are vital steps towards understanding, and even discovering, planets around them.

After studying Physics in Peru and Astronomy in Brazil, Jorge went on to undertake postdoctoral positions at California Institute of Technology, the Australian National University and the Universidade de Porto, Portugal. He has been a professor at the Universidade de São Paulo, Brazil, since 2010. He currently uses a technique called spectroscopy to study stars, planets, and the evolution of our galaxy.

Since obtaining a PhD in Astronomy from the University of São Paulo, Brazil, in 1996, André has worked as an Astrophysics researcher at Brazil's National Institute for Space Research. André also carried out a postdoctoral internship at the University of Central Lancashire, UK, in 2008. His expertise mainly focuses on chemical abundances of solar-type stars, and stellar populations in nearby luminous early-type galaxies.