We humans have always pondered the question: “Are we alone in the Universe?”. A vital key in answering this philosophical question is discovering potential habitable worlds outside of our own Solar System. But how do we do this?

Exoplanets are planets beyond our Solar System that orbit stars other than the Sun. The first exoplanets were discovered back in 1992 by Aleksander Wolszczan and Dale Frail. Oddly enough, they didn’t orbit a normal star, like our Sun, but a pulsar –– a compact and rapidly rotating stellar corpse. In 1995 Michel Mayor and Didier Queloz found the first exoplanet around a Sun-like star, for which they were awarded the Physics Nobel Prize in 2019.

As of today there are more than 5000 confirmed exoplanets, a number that keeps rising steadily. Despite what this huge number may suggest, finding exoplanets is no walk in the park. This is because planets themselves emit very little or no light of their own. Instead, they reflect their parent stars' light, which shines much more brightly in comparison. Seeing the light from a distant exoplanet is like spotting a dim candle in front of a raging forest fire. So, astronomers had their work cut out in their hunt for them!

In this article we’ll tell you about some of the methods astronomers use to detect and study exoplanets with modern astronomical facilities, including those at ESO’s observatories.

Stars and their exoplanets are bound together by gravity. When a planet orbits a star, both of them are actually moving around their common centre of mass. This makes the star wobble back and forth, leading to small variations in the speed — or radial velocity — of the star, which betray the presence of a planet even if we can’t see it.

Astronomers can detect and measure these subtle changes in a star’s speed using spectroscopy, a technique that decomposes the light of an astronomical object into its constituent colours. A star’s spectrum contains dark lines due to certain chemical elements absorbing very specific colours. When a star moves towards us or away from us those lines shift to bluer or redder colours, respectively, due to something called the Doppler effect –– the same phenomenon that changes the pitch of a siren when a vehicle is approaching us or moving away. 51 Pegasi b, the planet that earned Mayor and Queloz their Nobel prize, was discovered this way. 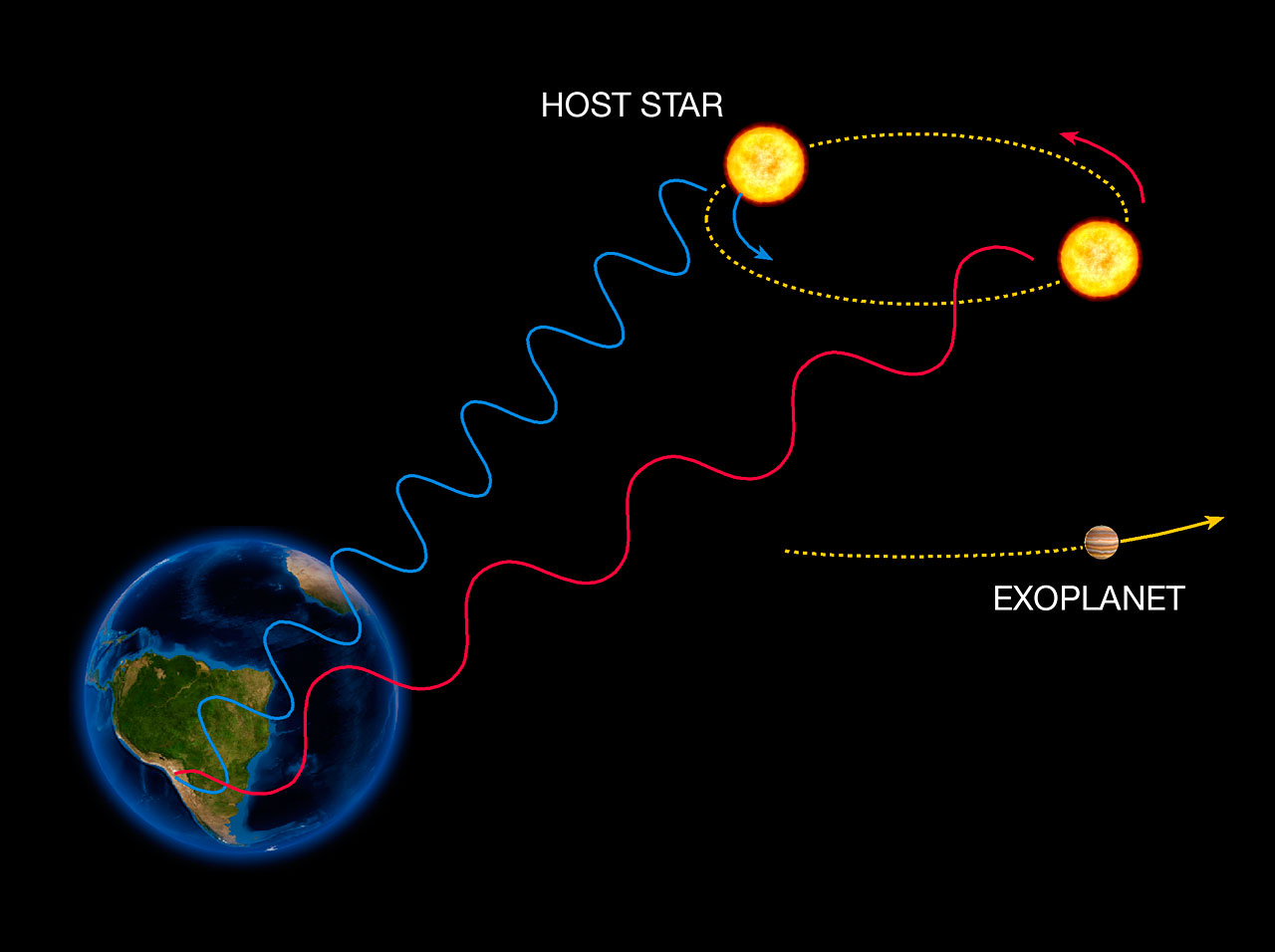 Illustration of how the radial velocity method works. Both the planet and the star (not to scale) orbit their common centre of mass. In doing so, the star’s spectrum shifts towards bluer and redder colours as the star approaches us and moves away.
Credit: ESO

However, planet detectives need to be extra vigilant with this method as the effect has a very small impact on the parent star. Even Jupiter, the largest planet in our Solar System, makes the Sun wobble by only 13 m/s during its orbit. So, as you can imagine, this minute effect can only be detected by very sensitive instruments.

One of such instruments is the High Accuracy Radial velocity Planet Searcher (HARPS) attached to ESO’s 3.6-metre telescope at our La Silla Observatory in Chile. HARPS is so precise it can pick up tiny changes in a star’s speed of around 1 m/s or 3.5 km/h –– a gentle walking pace! At one point HARPS was responsible for two thirds of all the known exoplanets with masses less than that of Neptune. It also brought in the first planet around a star almost identical to the Sun, and thanks to the observations with this instrument, astronomers calculated that there are billions of rocky planets around red dwarfs in the Milky Way, the most abundant type of star in our galaxy.

HARPS also uncovered clear evidence of a planet orbiting Proxima Centauri, the closest star to Earth after the Sun, approximately four light-years away. Proxima’s rocky world, a little more massive than Earth, has a temperature suitable for liquid water to exist on its surface, a major breakthrough in exoplanet research.

About 500 km north of La Silla we find ESO’s Paranal Observatory, which hosts another powerful planet hunter: ESPRESSO, the Echelle SPectrograph for Rocky Exoplanet and Stable Spectroscopic Observations, mounted on ESO’s Very Large Telescope (VLT). In many ways ESPRESSO is the successor of HARPS: it’s extremely stable, and it can use any of the 8-m telescopes of the VLT, thus gathering more light and detecting even tinier stellar wobbles.

ESPRESSO recently discovered a second planet around Proxima Centauri; at just a quarter of Earth’s mass, this is one of the lightest exoplanets known. And it was also used to study an interesting planetary system around the star TOI-178, where planets orbit in harmonious resonance as illustrated in the video below.

Artist’s impression of the planetary system around TOI-178. The orbital periods of the 5 outermost planets are in resonance, meaning that some planets align with each other every few orbits. In this animation, each planet has been assigned a different musical tone, creating harmonious chords when two or more planets are aligned.
Credit: ESO/L. Calçada

When a planet passes between its parent star and us, it blocks a small fraction of the starlight from reaching us, creating a periodic dip in the brightness of the star which can be detected at Earth. This method is called transit photometry, and as of today it’s responsible for 75% of all known exoplanets, mostly thanks to NASA’s Kepler Space Telescope.

The change in brightness is a very minute effect. So much so, that it can be comparable to small, unrelated changes in the star’s surface brightness itself such as starspots. Therefore, astronomers have had “false positive” detections of exoplanets and need to be careful before announcing their discovery.

Transits can also be timed to reveal the presence of additional planets. Say we already know a star has its own planet, which creates periodic dips in the brightness of the star. But when we carefully measure when these dips happen, we notice that sometimes they occur a bit earlier or later than predicted. This can be an indication of the presence of an extra planet, whose gravitational pull alters the motion of the first one. This is called “transit timing variation”, and it’s a powerful method to detect planets through their influence on their siblings.

Animation illustrating the small dip in a star’s brightness as a planet crosses in front of it.
Credit: ESO/L. Calçada

Perhaps the best-known planetary system discovered via transits is TRAPPIST-1, a system of seven planets orbiting a cold dwarf star about 40 light-years away. Some of them are at the right distance from the star to perhaps host liquid water. This system has both the largest number of Earth-sized planets found to date and the largest number of worlds that could support liquid water on their surfaces, a huge win for planet detectives.

The system takes its name from the TRAPPIST–South telescope, led by the University of Liège in Belgium in collaboration with the Geneva Observatory in Switzerland, and installed at ESO’s La Silla Observatory. Many other facilities have been used to study the transits in TRAPPIST-1, including NASA’s Spitzer Space Telescope, and ESO’s hawk-eyed High Acuity Wide-field K-band Imager (HAWK-I) instrument at the VLT.

ESO’s Paranal and La Silla observatories are in fact home to several so-called “hosted telescopes” led by other institutions which are devoted to planetary transits. Besides the aforementioned TRAPPIST-South there’s the also Belgium-led SPECULOOS, the Next-Generation Transit Survey (NGTS), MASCARA and ExTrA. These telescopes constantly scan the sky, looking for periodic dips in the brightness of thousands of stars.

Even though the previous methods allow us to unambiguously detect exoplanets, they are indirect in that they rely on the effects that said planets exert on their host stars. But is it possible to actually take direct images of exoplanets? The answer is yes, but it’s extremely challenging. 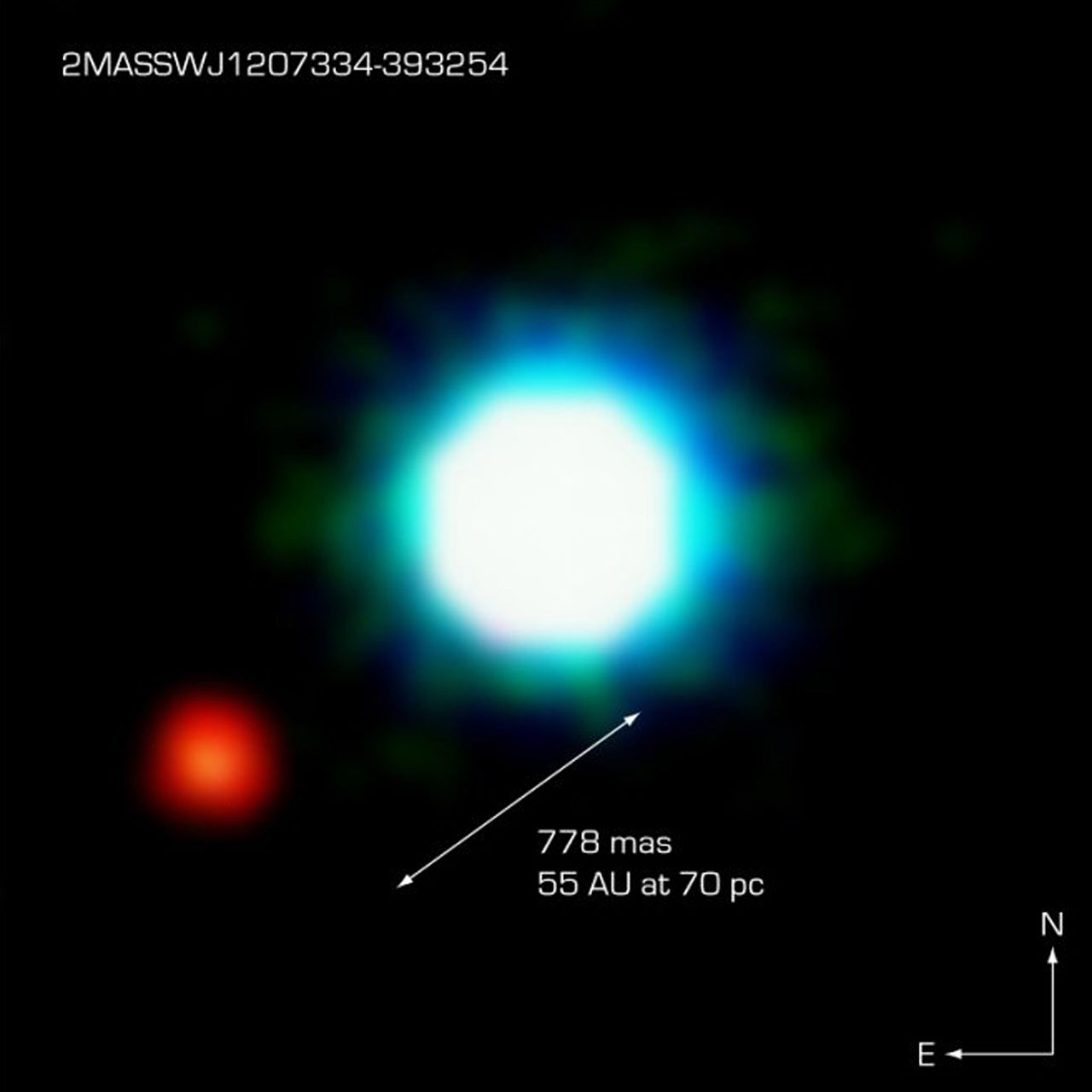 First ever image of an exoplanet (red source to the bottom left) orbiting around a brown dwarf (brighter source at the centre).
Credit: ESO

Planets are buried under the glare of the stars they orbit; if you are observing from Earth, this image is made fuzzier by the turbulence in Earth’s atmosphere, which blurs the images of astronomical objects. To correct for the latter, astronomers use a technique called adaptive optics, whereby a small deformable mirror reshapes itself hundreds or even thousands of times per second to counteract the turbulence, monitoring a reference target in real time.

Using this technique, ESO’s NACO instrument at the VLT took the first ever picture of an exoplanet back in 2005, a ground-breaking feat for astronomy. The planet is about 5 times more massive than Jupiter and it orbits a brown dwarf, a small star with 13-14 times the mass of Jupiter.

This system was somewhat special in that it comprises a rather big planet orbiting a very small star, so their relative brightness are not dramatically different. But what happens when the parent star is millions or even billions of times brighter than the planet we want to image? In this case adaptive optics alone isn’t enough: besides correcting atmospheric turbulence we also need to somehow block the light of the star. Therefore, direct imaging instruments are usually equipped with devices called coronagraphs, which mask the light of the star, creating a sort of artificial eclipse inside the instrument.

NACO is now retired, but ESO still has one of the most advanced direct imaging instruments: SPHERE, the Spectro-Polarimetric High contrast imager for Exoplanet REsearch, mounted on the VLT. Since first beginning its pursuit of exoplanets in 2014, SPHERE has tracked a stunning time-lapse of an exoplanet orbit, took the first ever image of a multi-planet system around a Sun-like star, and even managed to image a newborn exoplanet for the first time.

Detecting exoplanets and their basic properties such as their mass or size already tells us a lot about them and how they formed. But astronomers are also interested in studying their atmospheres, and perhaps find biomarkers that could betray the presence of life.

One way to do so is to study transits at different wavelengths, analysing which colours of the star’s spectrum are absorbed or scattered by different chemicals in the planet’s atmosphere. An even more challenging approach is to directly take a spectrum of the planet itself.

While this is now mostly done on giant gas planets, astronomers want to eventually study the atmospheres of small rocky worlds like Earth, which requires much larger telescopes capable of detecting such faint sources. The hunt for exoplanets will thus benefit from future giant observatories, such as ESO’s 39-metre Extremely Large Telescope currently under construction in Chile and set for first light by the end of the decade, which will allow astronomers to uncover the secrets of exoplanets with unprecedented detail.

Juliet Hannay is part of the science communications team at ESO. She is a former student of the University of Glasgow acquiring a Bachelors and Masters degree in Astronomy and Physics. Juliet found a passion for science outreach and communication through her roles as Outreach Convenor, Vice President and President for the Women in STEM society and specialist editor for the Glasgow Insight into Science and Technology magazine.