You’ve most likely seen the image below: the famous Hubble Ultra Deep Field, which contains thousands of galaxies whose light has travelled for billions of years before reaching us.

But did you know that the Universe hasn’t always been full of light sources like stars and galaxies? Astronomers call this the Cosmic Dark Ages. Some time in the early Universe, about one billion years after the Big Bang, something switched on the lights and brought the Universe into the era we know today. Let’s find out how this happened! 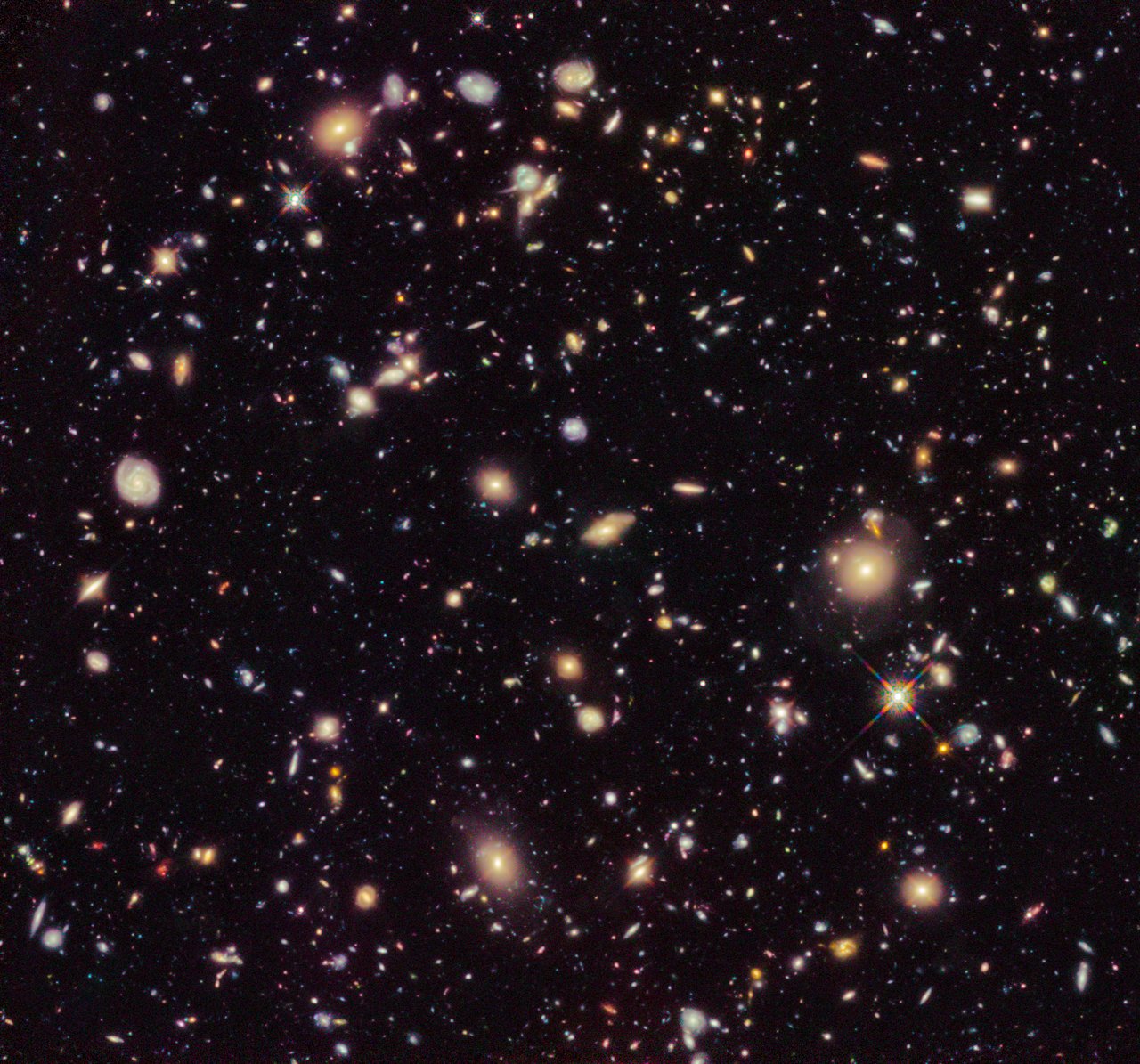 Let’s start at the very beginning (a very good place to start)...

Around 13.8 billion years ago, the Universe sprang into being, and started gradually transforming into the vast cosmos we know today. The Big Bang wasn’t really a “bang”, so to speak — it was more a very rapid expansion from something infinitely small, infinitely hot, and infinitely dense to something marginally less so –– which then continued to expand for the rest of time.

Straight after the expansion began, the whole Universe was an extremely hot “soup” of subatomic particles: protons, neutrons and electrons. As it began to cool, the protons and neutrons started grouping together to form hydrogen and helium atoms. These atoms were ionised: the intense heat of the early Universe stripped these atoms of their electrons. At this point, light could not travel through the Universe as it would be deflected by the free electrons.

Once the Universe cooled a little more, electrons were able to join the ionised atoms, creating neutral hydrogen and helium. This process, known by astronomers as recombination, occurred roughly 300 000 years after the Big Bang and made the Universe transparent, because light would no longer be deflected by free electrons.

The reason astronomers know about this era is from remnant Cosmic Microwave Background radiation, which is scattered across the cosmos today. This is leftover light from the era of recombination whose wavelength has been stretched by the expansion of the Universe, becoming redshifted. This means that the further this light has travelled, the longer its wavelength has stretched. This remnant light is a sort of footprint of how the Universe looked back then: just a gaseous soup of hydrogen and helium, with gas being more densely packed in some areas than others. But at this point there were still no sources of light like stars, so astronomers refer to this epoch as the Cosmic Dark Ages. 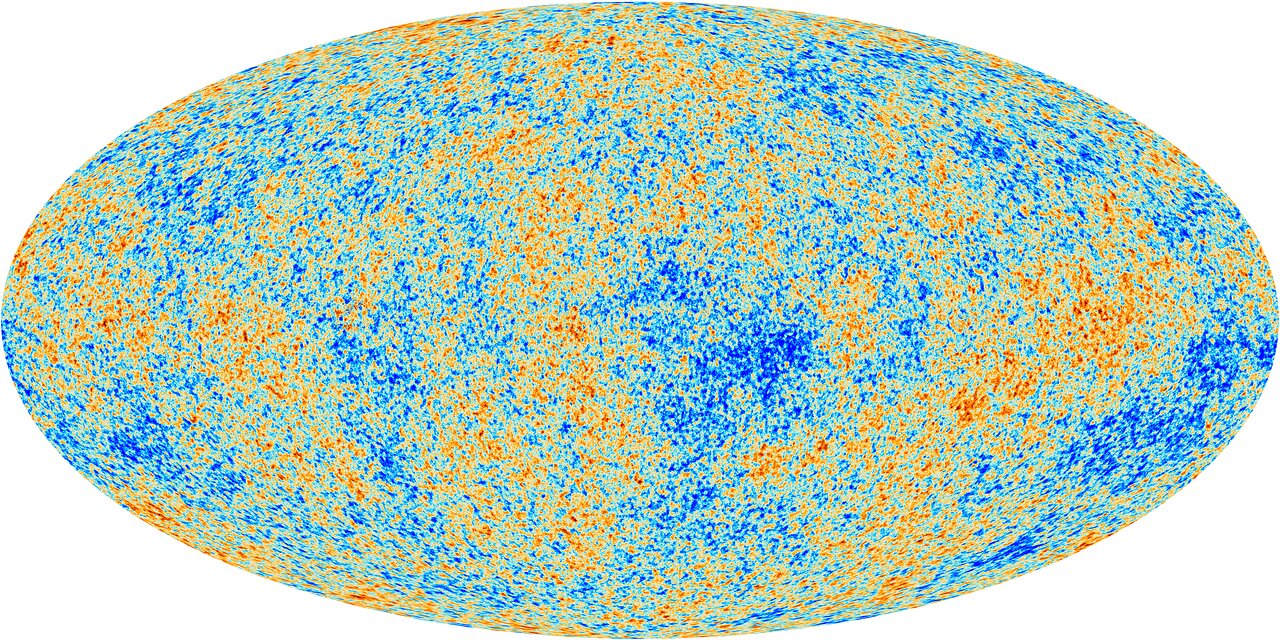 Map of the Cosmic Microwave Background captured by the European Space Agency’s Planck space telescope. Different colours show small fluctuations in temperature that correspond to areas with slightly different densities, which would later become the seeds for the formation of the first stars and galaxies.
Credit: ESA and the Planck Collaboration

Between 500 million to 1 billion years after the Big Bang, the Universe transformed, clearing the fog of neutral gas. It is thought that a vast amount of ultraviolet (UV) light was able to burn through this fog, stripping electrons from their atoms, ionising them. Because of this, astronomers call this time in the early Universe the epoch of reionisation, with “bubbles” of ionised gas growing amidst the surrounding neutral gas. It’s not yet known what exactly provided the necessary UV light to reionise the Universe; it could have been stars, early galaxies, or quasars, or even a combination of these.

This video shows a simulation of how reionisation may have occurred. The simulation starts with neutral gas, shown in dark tones. The ultraviolet radiation from the first stars strips electrons off these atoms, creating bubbles of ionised gas (shown in blue) that expand as the UV radiation reaches further out.
Credit: M. Alvarez (http://www.cita.utoronto.ca/~malvarez), R. Kaehler, and T. Abel

Astronomers have hypothesised that the intense UV radiation from the epoch of reionisation was released from the very first stars. They would have formed over millions of years as some areas of the cosmic fog condensed and collapsed under their own gravity.

A star is a very dense form of plasma that fuses together atoms like hydrogen and helium under very intense heat and pressure, forming heavier elements and releasing vast amounts of energy. Once all the fuel has been used up, depending on the size of the star, it will die, releasing a plethora of new elements into the space around it, which will end up in subsequent generations of newer stars.

Diagram depicting the major milestones in the evolution of the Universe.
Credit: NAOJ

Up until very, very recently, the existence of extremely massive stars in the early Universe was purely theoretical, simply because peering into space that far back into time was limited by the technology available.

In 2011, research using ESO’s Very Large Telescope (VLT) allowed astronomers to probe into the early Universe, finding early stars and galaxies when the Universe was only 780 million years old. They found that the UV light emitted by some of those galaxies would have represented an important source of energy to reionise the cosmic fog. Another study in 2015 used the VLT and other telescopes to study early galaxies, finding a surprisingly bright galaxy with no traces of elements heavier than helium, just as expected from the first generation of stars.

Then, on the 30th March 2022, astronomers using NASA/ESA’s Hubble Space Telescope were able to capture the most distant star ever seen, from when the Universe was only 7% of its current age, or 4 billion years after the Big Bang. They were able to see this due to an effect called gravitational lensing, where large galaxy clusters can act as a magnifying glass, showing objects at very large distances away. Called Earendal (which means “morning star” in old English), the star is estimated to be at least 50 times the mass of our Sun and millions of times brighter.

The very first galaxies would have been very different from newer galaxies astronomers observe today. Because of the chaotic nature of the early Universe, galaxy shapes would have been less defined, lacking stable features like bulges (tightly-bound conglomerations of stars towards the centre of the galaxy) and spiral arms (like those in the Milky Way). However, there are still some puzzling things… 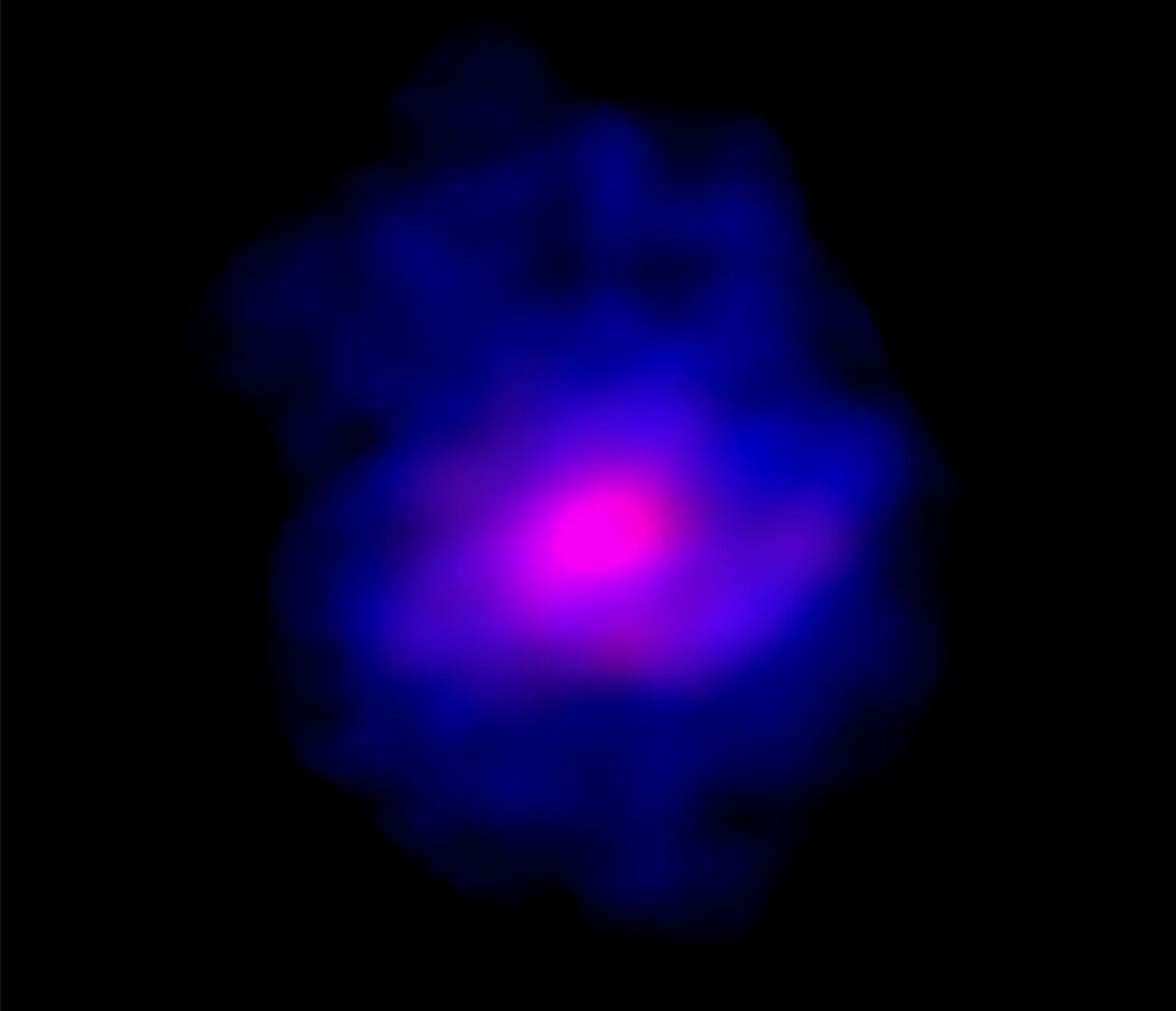 The distant galaxy ALESS 073.1 observed with ALMA, with the gas and dust shown in blue and red respectively.
Credit: Federico Lelli

Early galaxies are expected to be mostly populated with lighter elements like hydrogen and helium. However, on some occasions, astronomers have found galaxies from the epoch of reionisation that appear much older based on their chemical compositions. For example, in 2015, astronomers using the Atacama Large Millimetre/Submillimetre Array (ALMA), of which ESO is a partner, and ESO’s VLT, discovered a galaxy from when the Universe was around 700 million years old (firmly placing it around the epoch of reionisation), and found that it contained gas and dust from much heavier elements. An even more distant galaxy was studied with ALMA in 2017, and was found to be surprisingly dusty. This suggests that perhaps many early supernovae had populated these galaxies with heavy elements very quickly, but astronomers do not know this for sure.

Similarly, last year, astronomers using ALMA found a galaxy that appears much older than expected. We see it when the universe was just 1.2 billion years old, but it already exhibits features like a bulge and a rotating disc, similar to more evolved galaxies like our own Milky Way.

Clearly, there is still much yet to learn about galaxies in the early Universe.

While astronomers have been able to piece together a rough timeline and plausible theories about the Universe’s formation, much of it is still a mystery. It is very difficult to piece together an exact timeline of the early Universe. When did reionisation actually end? How were the first galaxies assembled together?

To answer these questions, more research and more accurate technology is needed. ESO’s Extremely Large Telescope (ELT), currently under construction in Chile and set to see first light later this decade, will be instrumental in understanding the early Universe.

The ELT will have a 39-metre mirror, bigger than all currently existing optical research telescopes combined, enabling it to collect a huge amount of light. It will allow astronomers to investigate individual stars in more distant galaxies, tracing their history back to the early Universe. Its operation will mark a dramatic increase in astronomy’s capabilities, peering back into the cosmos further and more accurately than ever before.

Let’s just be thankful that the Universe is transparent and full of light, and that, using the newest technology, we are able to peer back to the far reaches of the cosmos.

Naomi is an intern in Science Journalism at ESO. After studying a Bachelor's in Physics and Music from Cardiff University, she then studied her Master's in Science Communication at Imperial College London.