Behind the scenes at ESO: Showing you the road to the stars
What you’ll discover in this blog post:
From late nights studying sky maps with his grandfather to late nights leaving parties to make observations. From building small instruments for telescopes himself to being part of the construction of the biggest eye on the sky. Andreas Kaufer talks about how astronomy has changed during his career, along with the challenges ahead as the field continues to advance.
I saw astronomy as a hobby at first, and it was not actually my goal to be a professional astronomer.

Q. What about astronomy first piqued your interest?

A. My grandfather was a big fan of world maps and the last page of world atlases at that time always had a map of the stars. So, one evening, when I was a kid we were looking at the sky and he had one of his big atlases out and we were trying to understand what this white light in the sky was. We couldn’t figure it out because it wasn’t on the map. Eventually, we found out it was a planet which doesn’t appear on a paper map because its position is always changing. We were curious and got some books to read about it and that’s how I first became interested in astronomy. Shortly after I joined a nearby amateur observatory, Starkenburg Observatory in Heppenheim.

But I saw astronomy as a hobby at first, and it was not actually my goal to be a professional astronomer. I only returned to astronomy at the end of my physics studies.

Q. So how did you come back to astronomy?

A. I studied Physics in Heidelberg, Germany, where there was a heavy focus on particle physics. The Large Hadron Collider at CERN was really taking off at the time and many of us were getting into particle physics and working on the big experiments there. But there was the option to do an astronomy practicum at the observatory in Heidelberg — so I got back into astronomy. 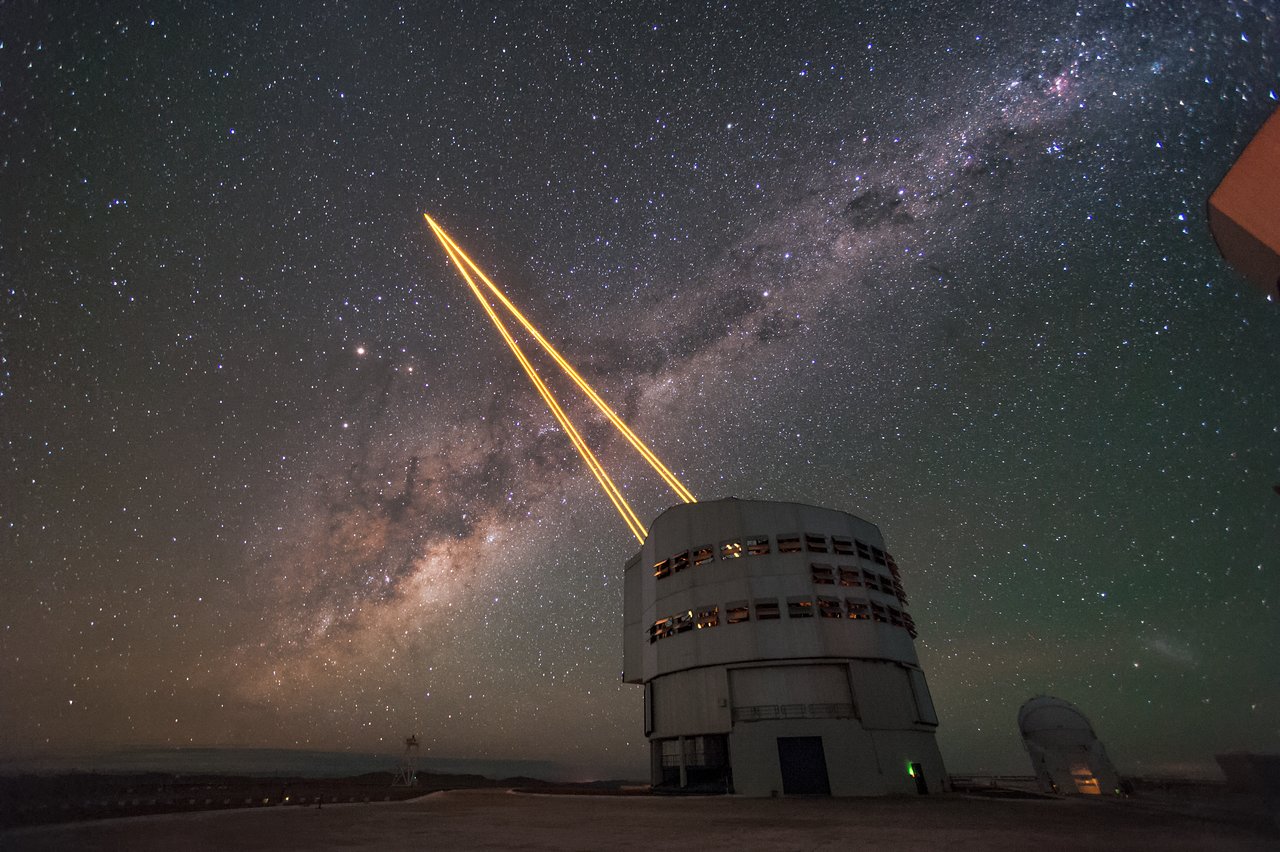 The fourth Unit Telescope of the Very Large Telescope (VLT), using the 4 Laser Guide Star Facility that forms part of the telescope’s adaptive optics system. This system supports the state-of-the-art selection of instruments used by the VLT.
Credit: F. Kamphues/ESO

I did some stellar atmosphere modelling work on the university’s mainframe computers at a time when this was quite a new thing. At the same time I got into observations because we had some monitoring programmes there at night at the observatory on the Königstuhl. It’s not the best site but when the weather was clear and the city below was under clouds we could observe. But the downside was that when I was on-shift and the weather was clear, I would have to leave parties and movies to go to the observatory in the middle of the night!

Building instruments was my favourite thing. At the amateur observatory, we had to build instruments ourselves because we couldn’t afford to buy such equipment. I was lucky to be able to do it later on a big scale. First at the observatory in Heidelberg, and then later here at ESO where we build instruments on a very big scale, so it’s a dream come true to be here!

Q. How does the Directorate of Operations contribute to ESO’s overall mission?

A. In the Directorate of Operations we take care of the scientific operation of all of ESO’s facilities; this includes all the telescopes and instruments which are built by the organisation and in collaboration with institutes and the industry in our Member States. We maintain the telescopes and instruments at their best possible performance and run the whole system from preparing and executing the observations with our telescopes to delivering the processed data to the scientists. For many observations the scientist do not go to observe onsite anymore but we take their observation at the best possible time for them.

That for me is still and always will be the motivation: to enable.

Q. What are some of the most rewarding aspects of the job?

A. For me, the big eye-opener coming to ESO was seeing what all the other scientists are doing. Academia and institutes are usually focused on small areas of science, so people (like me) coming from there are often only exposed to a specific part of astronomy. Then arriving at the observatories, one sees all these ideas; we review about a thousand research proposals to use the telescopes every six months and whilst not all of them are accepted, we see ideas from all areas of ground-based astronomy. Due to my current role, I don’t participate in huge projects anymore, but for me, the reward is to see other people pushing forward diverse and innovative research using ESO facilities.

The satisfaction somehow (which I think is true for many people at ESO) is to enable research. You feel part of these discoveries even if you did not do the science or the analysis yourself. But the telescope and instrument worked in the right way at the right time to get the best possible observations. That for me is still and always will be the motivation: to enable.

Andreas Kaufer mops up a leak from the VLT’s SINFONI instrument.
Credit: ESO

Q. And some of the strangest?

A. There is a picture of me with a mop under one of the big telescopes, mopping up some water dripping out of the instrument.

We had a huge leak in a cooling line inside the VLT’s SINFONI instrument. Everybody had to rush, me included, to clean up otherwise the cooling liquid would destroy the oil film on which the telescope rotates. For me this was a natural thing to do, so I was surprised when people were later showing this picture around saying “look the Director has been mopping the telescope!”

Q. What are the challenges you see for the next generation of scientists and engineers in astronomy?

A. As for scientists, we already see that they are becoming more and more disconnected from the data collection by the telescopes, as they often stay at home whilst observatory staff collect the data. Modern scientists are very good at using data from whichever telescopes help them answer their questions, be they space- or ground-based. Given this, we need to ensure that we keep understanding the scientists’ needs, and that we keep adjusting to meet them.

For the engineers, the world of technology is changing very rapidly. At ESO we are already quite advanced in many areas but not in others, so we need to keep an eye open to the advancements happening around us. At Paranal Observatory, we’re working with technologies from when the VLT was built, from the 80s and 90s. The Extremely Large Telescope (ELT) — currently under construction — will use much more modern technology. The challenge for our engineers at the observatory is to make this bridge between the different generations of technology and master them all.

Those are what I would see as the two big challenges for ESO. Trying to keep our scientific community engaged and staying at the forefront of technology so that we can achieve the best quality science.

Those are what I would see as the two big challenges for ESO. Trying to keep our scientific community engaged and staying at the forefront of technology so that we can achieve the best quality science.

The ELT will be far larger than the Colosseum in Rome.
Credit: ESO

Q. What are you looking forward to in astronomy over the next ten years?

A. We are all fascinated by the idea of making progress in the search for life elsewhere in the Universe! But a more realistic goal is continuing our search for exoplanets and to advance on the analysis of their atmospheres.

Queloz and Mayor recently together received the 2019 Nobel Prize in Physics for discovering the first extrasolar planet orbiting a solar-type star, which they found just when I first got into professional astronomy. This was really an eye-opener. We knew that there must be planets around other stars but when they observed the first one, it was like science fiction becoming reality! That kicked off a whole new field of astronomy and, one generation later, we’ve discovered several hundred planets with our instruments at La Silla Observatory. Furthermore, the VLT has taken many images of planets around stars other than our Sun, and in the next ten years we will be able to use the ELT to look for traces of life in their atmospheres.

I’m also looking forward to ESO’s partnership with the Cherenkov Telescope Array (CTA) Observatory. CTA will be an observatory made up of an array of many telescopes that allow us to observe the sky at very high energies by capturing gamma-rays. And ESO will host the southern part of this observatory again opening up a new window to the ESO community! 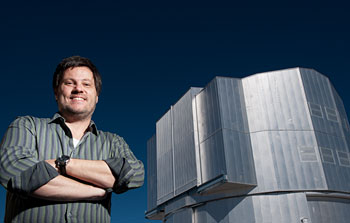 Born in Heidelberg, Germany, Andreas Kaufer graduated with a PhD in Astronomy from Heidelberg University in 1996. He began his professional career in astronomy at the Heidelberg State Observatory where he worked in theoretical and observational astronomy in the fields of stellar atmospheres of massive stars and in the evolution of galaxies.

In 1999 Andreas joined the science operations group at ESO to contribute to the startup of the operations of the newly built Very Large Telescope (VLT). His primary contribution was the commissioning and startup of operation of one of the first VLT instruments, UVES. In 2003 Andreas became responsible for the suite of all nineteen optical, infrared, and interferometric instruments operating at the La Silla Paranal Observatory.

In 2006 Andreas became Director of the La Silla Paranal Observatory, and since 2008 he has been Director of Operations at ESO, responsible for the end-to-end operations of the ESO observatories in Chile and the European segment of the ALMA operation.

In his free time, Andreas enjoys travel and photography. A selection of his travel photos can be found on his webpage.