Behind the scenes at ESO: Showing you the road to the stars
What you’ll discover in this blog post:
ESO operates observatories in Chile’s Atacama Desert, one of the driest places on Earth. You are likely familiar with the stunning night sky views this extreme environment provides astronomers, but perhaps you know a lot less about the alien-looking landscapes that are home to ESO telescopes.

The Atacama Desert is a strip spanning 1600 km in the northern third of Chile, and it meets the conditions astronomers look for when building new observatories: very little light pollution and rainfall, and a very stable atmosphere, among others. But the extreme conditions in the Atacama Desert also mean that the scenery, flora and fauna in this region are far removed from what most of us are used to seeing. In this post we won’t be looking up at the marvels of the night sky; instead, we will explore the unique surroundings of ESO’s observatories. 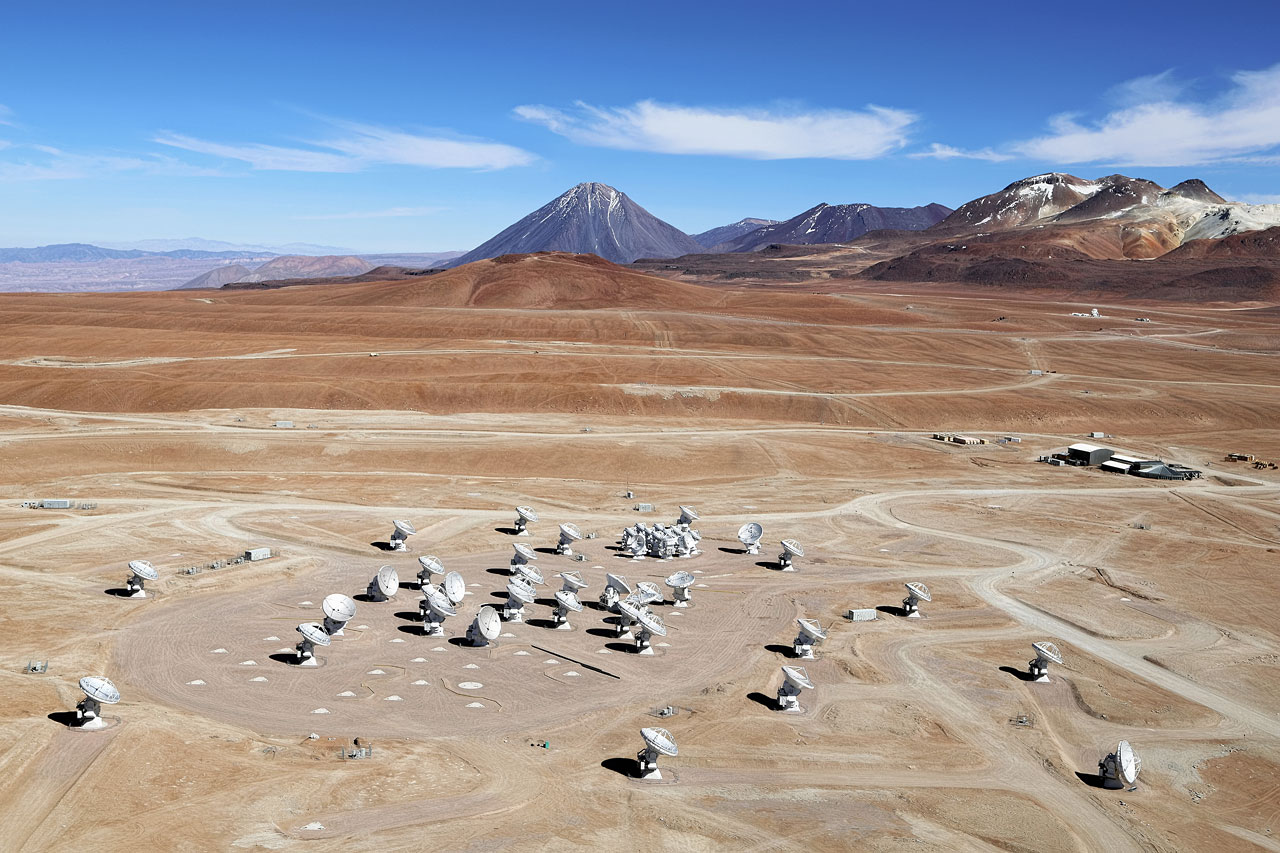 Both ALMA and APEX are located in the Chajnantor plateau, about 5000 m above sea level in the northern part of the Atacama desert. ALMA is an array of 66 antennas in which ESO is a partner, whereas APEX is a single antenna –– based on an ALMA prototype –– operated by ESO.

They both observe at millimetre wavelengths, which are heavily absorbed by water vapour in the atmosphere. The low humidity and high elevation at the plateau provide ALMA and APEX with an unobstructed view of the universe. But at such a high altitude, astronomers and engineers must take oxygen tanks when they go to the plateau!

These antennas operate under the silent watch of the majestic Licancabur and Juriques volcanoes, on the border between Chile and Bolivia, rising 5916 m and 5704 m above sea level respectively. 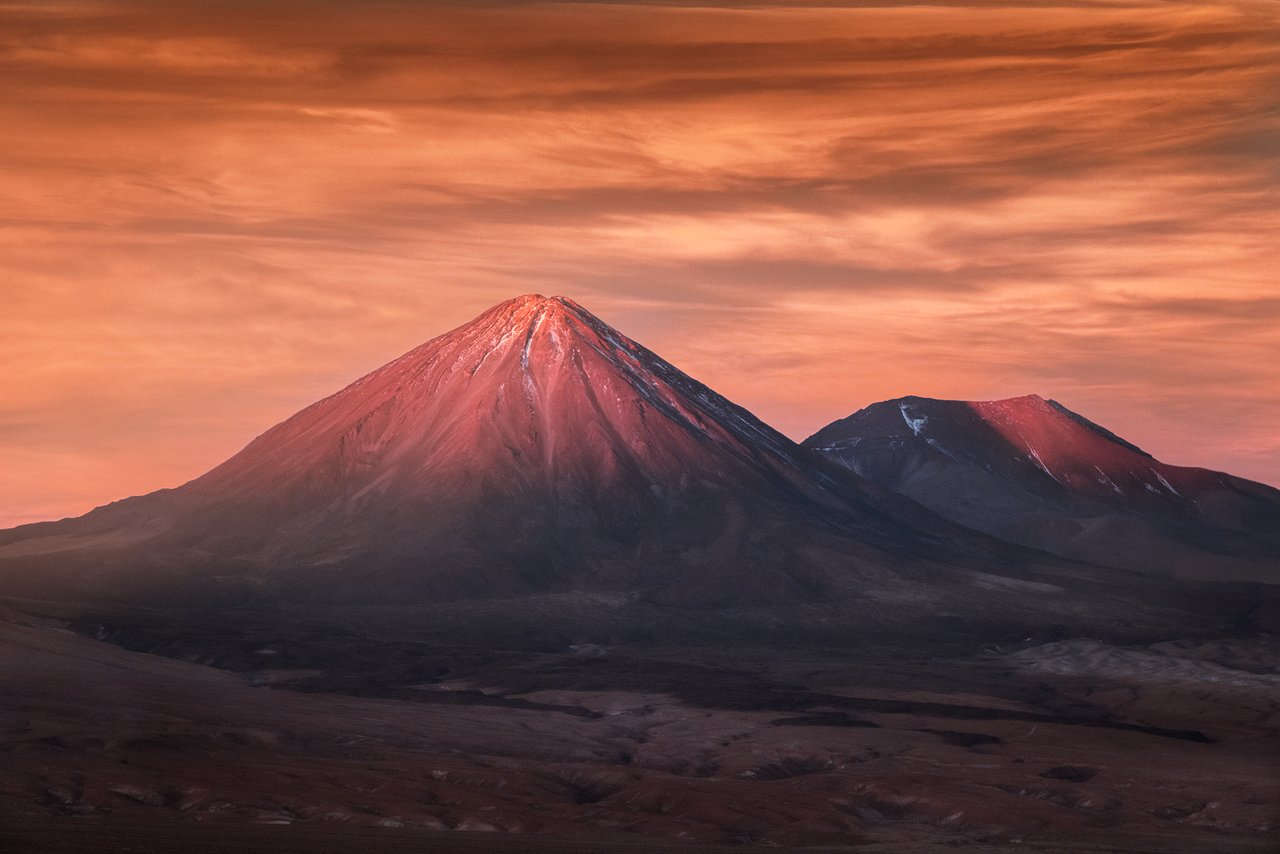 The Andes, which flank the Atacama Desert to the East, is riddled with volcanoes like these, as the Nazca tectonic plate sinks under the South American one. This is also responsible for the frequent seismic activity across the country, but don’t worry: telescopes are equipped with anti-seismic technology such as damping systems to absorb the shocks.

The cold temperatures and low humidity in the Chajnantor plateau are responsible for a curious snow formation called penitentes: spires of hardened snow pointing towards the direction of the Sun. As sunlight hits the snow it vaporises it without melting it. This occurs at different rates in peaks and hollows, slowly carving these curious blade-shaped structures.

Despite these extreme conditions, the area is home to rich flora and fauna. The latter includes foxes and vicuñas –– close relatives of llamas –– which can often be seen strolling around the ALMA antennas. Other dwellers of this region are the much shier viscachas –– small rodents similar to rabbits, but unrelated to them. At lower altitudes donkeys are a common sight. 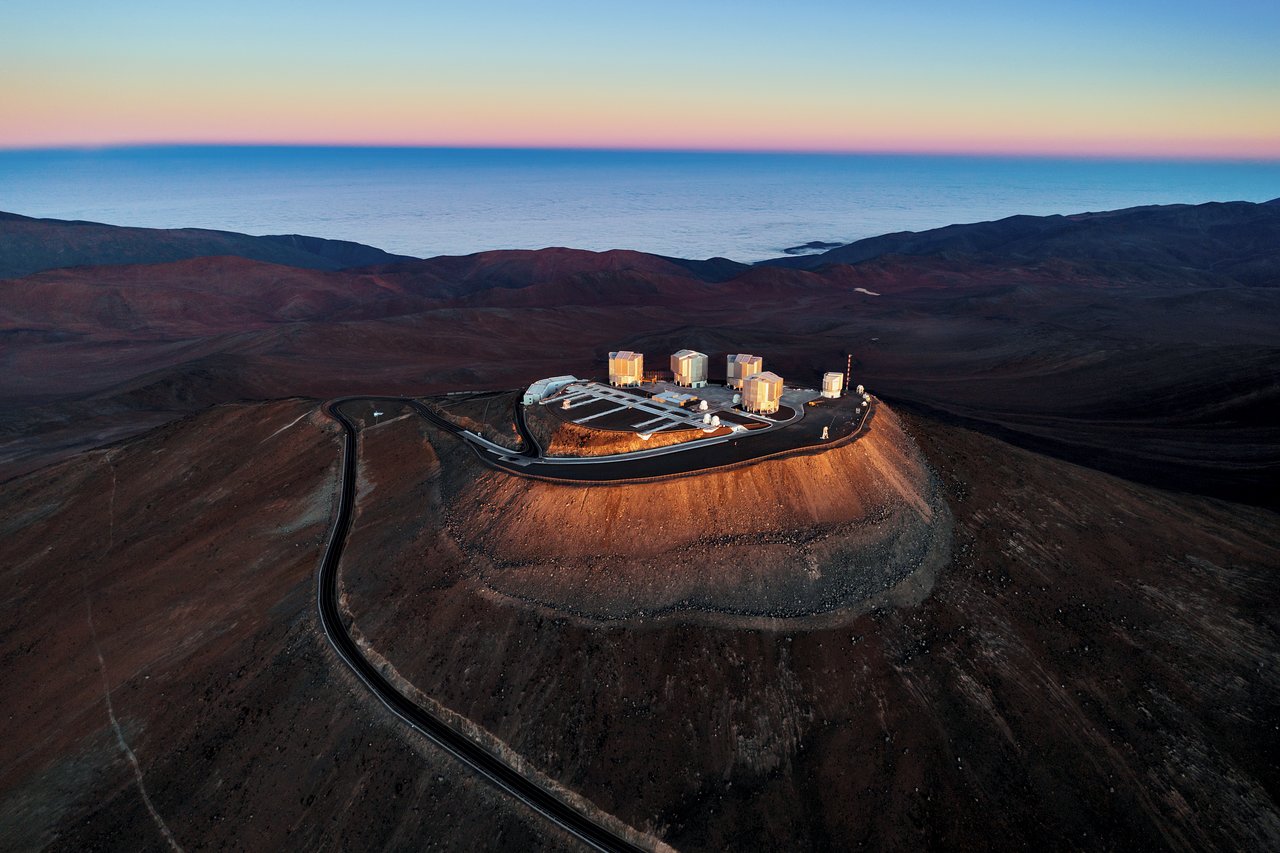 The top of Cerro Paranal is lit by the first rays of the morning sunshine. In the background, a sea of clouds hover over the Pacific Ocean.
Credit: Gerhard Hüdepohl/ESO

Paranal is located 300 km south west of ALMA, closer to the coast rather than by the Andes, 2600 m above the sea level. It is home to the Very Large Telescope, ESO’s flagship optical facility, which comprises four 8.2 m Unit Telescopes and four 1.8 m Auxiliary Telescopes. In addition, Paranal also hosts the VISTA and VST survey telescopes, as well as non-ESO telescopes like the NGTS and SPECULOOS

As Paranal is farther from the Andes than ALMA, it offers less dramatic views of the mountain range. However, it is possible to spot the Llullaillaco volcano on the border between Chile and Argentina. With an impressive elevation of 6739 m, it’s often covered in snow, offering a beautiful contrast with the surrounding reddish terrain.

This red colour makes the area around Paranal uncannily similar to Mars; even the relief and rock formations are similar. In fact, the European Space Agency often tests prototypes of their rovers next to Paranal.

You won’t see vicuñas or viscachas in Paranal, but if you’re lucky you might be able to spot a fox; especially on Sundays, when the scent of the traditional barbecue attracts them to the Residencia –– the staff loding. Birds of prey can often be seen close to the Paranal summit. They take advantage of air currents to swoop across the terrain, hunting for prey like small birds and lizards. 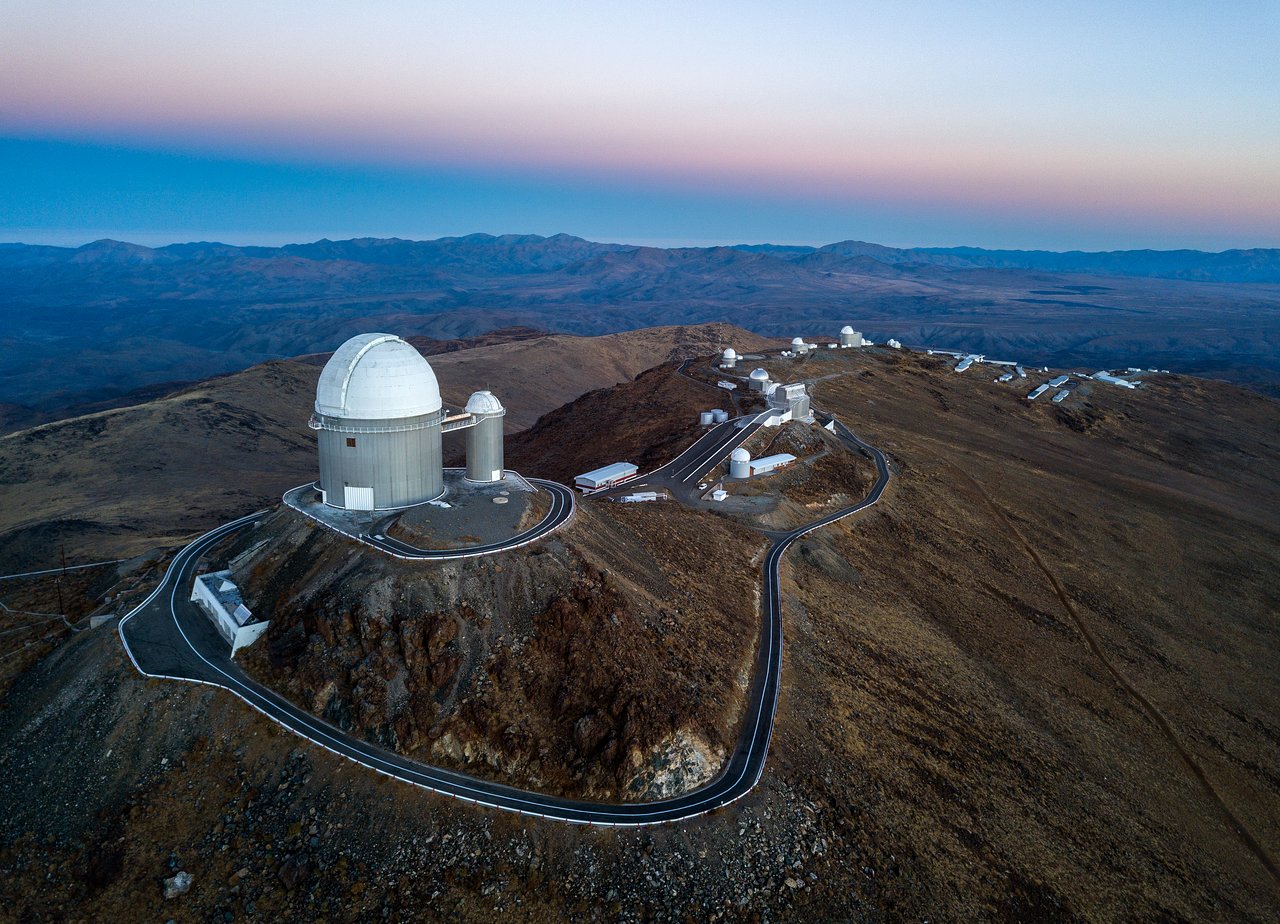 Aerial view of La Silla, with the ESO 3.6 m telescope in the foreground.
Credit: Gerhard Hüdepohl/ESO

La Silla Observatory lies on the southern outskirts of the Atacama desert, 500 km south from Paranal. It was ESO’s first observatory, inaugurated in 1969. It hosts a roster of telescopes including the New Technology Telescope –– the first telescope in the world with a computer-controlled mirror –– and the ESO 3.6 m telescope with its planet-hunter instrument HARPS. La Silla is also home to many non-ESO telescopes such as TRAPPIST-South, also devoted to exoplanets, or the recently-installed ESA’s Testbed telescope, which will test technology to automatically look for potentially hazardous asteroids.

As it is located much further south than Paranal and ALMA, the climate at La Silla is not as harsh, and thus vegetation is more common.

In terms of fauna, besides foxes –– common dwellers in all three observatories –– you can also find guanacos, which are larger cousins of vicuñas, donkeys, and even wild horses! You might think that traffic is not an issue in the middle of the desert, but these “commuters” can complicate things without warning...

La Silla is well-known for its many petroglyphs –– rock engravings left by the various cultures that have inhabited the area, like El Molle, the Animas, the Diaguitas, and the Incas that arrived from Peru.

Some petroglyphs depict humans and animals like llamas; others are geometric forms like circles, spirals or mazes, whose meaning is not understood. A photographic survey of the area catalogued several hundred petroglyphs. Today, the juxtaposition of these ancient engravings and modern telescopes tells a 2000-year-long story of humans trying to understand their place in the universe.

Petroglyph with abstract geometric shapes, with the ESO 3.6 m telescope on top of the hill in the background.
Credit: ESO/B. Tafreshi