Behind the scenes at ESO: Showing you the road to the stars
What you’ll discover in this blog post:
In April this year, four ESO astronomers travelled to Ghana in West Africa to spend a week teaching astronomy to everyone from postgraduate students to local fishermen. Their aim was to engage the community with fundamental principles of astronomy and inspire curiosity. We spoke to ESO Fellow Allison Man, the programme coordinator, about the trip.

Q: Can you give us a bit of background information about the ESO Astronomy Research Training programme?

A: Last summer I had the chance to serve as an instructor at the West African International Summer School for Young Astronomers (WAISSYA) in Ghana, alongside other astronomers from Canada, Germany, Ghana, Nigeria and South Africa. For context, most countries in West Africa do not have a formal astronomy curriculum in university education. Astronomy is a universally appealing subject which encourages people to pursue a wide variety of STEM careers, and even though the Square Kilometre Array will soon be co-hosted on the continent, not many people there have the chance to be trained as an astronomer.

Research is our strength — so why not offer research training in places where people do not yet have the opportunity?

We taught astronomy to a group of 65 undergraduate students. Many showed strong interest in learning more about astronomy and trying out research, and I thought that since ESO is a leading research institute in Europe, we could offer that. Research is our strength — so why not offer research training in places where people do not yet have the opportunity?

After WAISSYA, I gave a talk about my experience at ESO. Many colleagues were interested, and together we came up with the idea for the ESO Astronomy Research Training programme. Our aim was to connect ESO with people who are curious about the Universe and provide them with an opportunity to try their hand at astronomical research. We also wanted to identify talent from a pool of bright, capable students, to support them on their path toward becoming scientists.

ESO provided us with funding to send several astronomers to Ghana for one week, and so we enlisted a team of nine here in Garching to plan the training. Over the following four months we worked closely with Bernard Asabere, the manager and lead astronomer at the Ghana Radio Astronomy Observatory, and other colleagues at the Ghana Space Science and Technology Institute, to make this happen. Then four of us — Wolfgang Kerzendorf, Fabrizio Arrigoni-Battaia, Lisa Löbling and myself — were on the way to Ghana.

Q: Tell us about how the trip went.

A: It was memorable in many ways. Ghanaians are very hospitable and friendly. On our first day, we were shown around the Ghana Radio Astronomy Observatory, where they have a 32-metre radio telescope originally built for telecommunication. It was recently repurposed and commissioned for astronomy in last August, become the first operational radio telescope in the African Very Long Baseline Interferometry Network. It was great to witness the growth of astronomical capacity on the continent.

Discussion of spectral lines of galaxies during the training
Credit: Lisa Löbling

The Astronomy Research Training (ART) project did not take place in Accra, the capital of Ghana, but instead in a city called Cape Coast, the former capital during colonial times. The training was hosted by the University of Cape Coast, and attended by 40 motivated students split into two batches. The first batch were undergraduates and school teachers — some of them had never studied physics before — while the second batch were more advanced students including Masters and PhD students. Most of the students had not done any research in astronomy before.

For each group we had two days to give a broad overview of two topics: stars and galaxies. The stars course covered what we can learn about stars just from looking at their light, as well as the types, distances and evolution of stars. The galaxies course gave an introduction to what makes up a galaxy, and then used an online database called Goldmine to zoom in and out of the Virgo Cluster, and explore images and spectra of galaxies. It was a great tool for them to visualise the Universe with real data for the first time.

The ESO ART team with staff and volunteers at the Ghana Planetarium
Credit: Wolfgang Kerzendof

The teaching was designed to be inquiry-based: you don’t just lecture, but rather invite the students to pose questions about what they observe. It’s very similar to doing research — asking the right questions, breaking down your thinking into smaller bits, and coming up with tests to find the answers. The students were initially quite shy, but once we got to know them and got a discussion going, they became engaged in the process. I think they found this interactive type of learning fun! We certainly enjoyed teaching.

During the course, we also held two Skype sessions with ESO astronomers: Jason Spyromilio and the ESO Director General Xavier Barcons. This happened on a computer running on backup generators, and the call with Xavier dropped twice — once the internet cut out and then my laptop overheated. I became quite frustrated, but we didn’t give up and neither did he, and we managed to conclude the call on a positive note. The students appreciated being able to interact with professional astronomers at a very high level and being able to ask questions about everything from black holes and supernovae to how to run an observatory.

Q: Did you face any other challenges during the programme?

A: We had power blackouts during the course that lasted unusually long and affected the whole city. Our hosts did their best to provide us with a computer lab running on backup generators but this was not always possible. We improvised the teaching in these circumstances, which actually turned out to be effective and enjoyable. 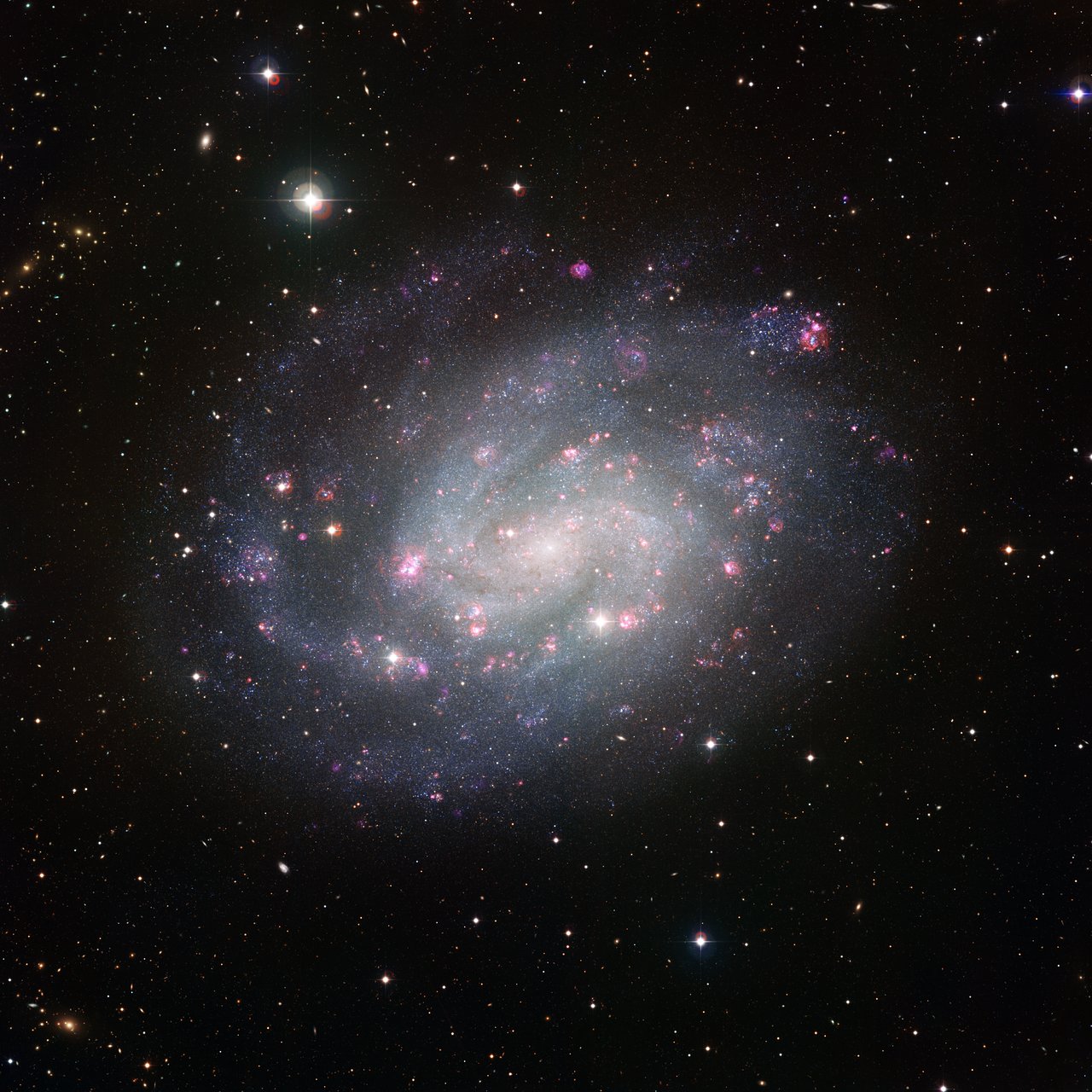 This picture of the spectacular southern spiral galaxy NGC 300 was taken using the Wide Field Imager (WFI) at ESO’s La Silla Observatory in Chile. It was assembled from many individual images through a large set of different filters over many observing nights, spanning several years.
Credit: ESO

Prompted by a student’s question about how astronomical distances are measured, we took an ESO poster of a galaxy and put it at the back of the classroom and split the students into groups. We asked them to come up with a way to measure the distance to the galaxy without actually going to the poster. Through lively discussions the students explored a method called parallax, a way to measure distances that we use in astronomy. We were listening to the discussion and facilitating it when necessary, and eventually, they all came up with a working method! It was quite a fulfilling experience for all.

Q: Will you continue to support and connect with these students?

A: That’s the goal. There’s only so much we can do in one or two weeks, so I’ve started a mentorship program. I’ve been recruiting two groups: mentees (students from Ghana or other West African countries who are interested in becoming professional astronomers) and mentors (colleagues here at ESO or from other institutions). So far I’ve made about ten matches and I’m looking to expand it further.

Next time I hope we can organise a longer visit that goes further into data analysis, which could potentially develop into thesis projects.

I think it’s useful on both sides. The students have been able to find out more information about what astronomers do and what opportunities are out there to get scholarships. My colleagues also find the experience very rewarding — it’s cool that technology allows us to connect with people who are on the other side of the Earth and who are passionate about the same thing.

There is certainly a demand for more trips over there, too. Colleagues from West Africa are always enquiring whether there will be opportunities for more astronomers to come and spend a few weeks to give training or co-supervise student projects. Next time I hope we can organise a longer visit that goes further into data analysis, which could potentially develop into thesis projects.

Q: You also ran outreach programmes for the public in Ghana. How did that go?

A: After the university programme, we ran an event at the Ghana Planetarium in Accra — the only one in Sub-Saharan Africa, outside of South Africa. We did some hands-on activities for children and gave short talks about supernovae and merging galaxies. The event was attended by around 30 people, so quite a good turnout and people were very enthusiastic, especially the children.

Lisa Löbling explaining the craters on the Moon at the Ghana Planetarium.
Credit: Allison Man

One of the ESO Fellows who came with us, Fabrizio Arrigoni-Battaia, created a memory game for the outreach event using ESO images of galaxies, stars and supernova remnants. The game was to find pairs of objects and to then teach the kids about what they were looking at. The kids loved it and so did we — we played it almost every night!

Q: What did you learn from the trip?

A: As coordinator of the project, I learnt a lot from communicating with different people — students, academics, and science communicators from ESO and Ghana. I think we all share the same vision: we work together to progress science, regardless of borders. The question is, how exactly do we do it? All astronomers are incredibly busy, so we have to work together and commit to making this vision a reality.

The memory game, invented by Fabrizio Arrigoni-Battaia, was enjoyed by many children at the Ghana Planetarium
Credit: Rustom Amartey

Q: Did any moment of the trip in particular stand out?

A: A special moment was when our host Nana Ama Browne Klutse, a research scientist at the Ghana Space Science and Technology Institute, took us to a fishing village close to where she grew up. With her translation, we learned from the fishermen about how they use stars for navigation, and how they know when to catch certain types of fish based on the constellations seen in the sky at a particular time of year. In return, we told them what we do with the stars. We explained how some of the brightest stars you see aren’t actually stars but they are planets like Mars or Jupiter and described our understanding of the Solar System with drawings on the soil.

Q: And finally, would you go again?

Allison Man was born and raised in Hong Kong. She completed her Bachelors in Physics there and then went to Denmark as an exchange student, where she had her first chance to make astronomy her job. She studied for her Masters and then PhD in Denmark, and afterwards moved to ESO Headquarters in Germany as a Fellow. She will soon be starting a new fellowship in Canada. Her research focuses on galaxy evolution and formation — she studies how galaxies merge together, form stars, and eventually become inactive.