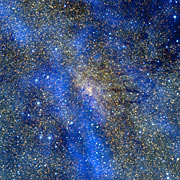 Afbeelding eso0841a
Submillimetre and infrared view of the Galactic Centre

Afbeelding eso0841c
Galactic centre and black hole
Send us your comments!
Subscribe to receive news from ESO in your language
Accelerated by CDN77
Terms & Conditions