Eight years after the passage of Comet Halley in early 1986, astronomers at the European Southern Observatory have succeeded in obtaining an image [1] of this famous object at a distance of no less than 2,820 million km from the Sun. The comet is now about as far away as giant planet Uranus. It recently passed the halfway mark towards the most distant point of its very elongated 76-year orbit. The image shows the 6 x 15 km avocado-shaped nucleus as an extremely faint point of light without any surrounding dust cloud. It appears that the surface is now completely frozen and the comet has ceased to emit dust and gas. This observation was made with the ESO 3.58 metre New Technology Telescope (NTT). It is by far the faintest and most distant image ever recorded of this comet.

The new Halley image was obtained in the course of an observational programme by a small group of astronomers [2], aimed at the investigation of distant solar system objects. The observation was difficult to perform and is close to the limit of what is possible, even with the NTT, one of the technologically most advanced astronomical telescopes.

In fact, this observation may be compared to viewing a black golfball, used during a late evening game, from a distance of 12,000 km.

At Halley's present, very large distance from the Sun, the intensity of the solar light is over 350 times fainter than here on Earth. The surface of the cometary nucleus is very dark; it reflects only 4 % of the infalling sunlight. The amount of light received from Halley is therefore extremely small: the recorded star-like image of the nucleus is about 160 million times fainter than the faintest star that can be seen with the unaided eye. A long exposure was needed to catch enough light to show the object; even with the very sensitive SuSI CCD camera at the NTT, the shutter had to be kept open for a total of 3 hours 45 minutes. During this time, of the order of 9000 photons from Comet Halley were registered. The extreme faintness of its image is illustrated by the fact that almost 1 million, or 100 times as many photons were simultaneously received in this direction from the luminous atmosphere of the Earth. They must be carefully "subtracted", before the comet can be seen.

There is another complication. Due to the motions of the comet and the Earth, the direction to the comet (as seen against the stars in the background) continuously changes during the observation. The movement of the telescope must therefore be accurately offset to "follow" the motion of the comet in order to keep the sparse photons falling on the same spot of the detector during the long exposure.

The measured brightness of the Halley image (visual magnitude 26.5 +- 0.2) closely corresponds to what would be expected, if it results from sunlight being reflected from the nucleus alone. This indicates that there is little, if any, dust left around the nucleus and it must be assumed that its surface layers are now completely frozen.

The observation therefore shows that nothing is left of the great mass of dusty material, estimated at 1 million tonnes, that was thrown out during the completely unexpected outburst observed at ESO in February 1991. Nevertheless, the astronomers intend to continue to monitor the behaviour of Halley during the next years - it cannot be excluded that this comet may be good for another surprise!

FUTURE OBSERVATIONS WITH THE VLT

Comet Halley will continue to move outwards through the solar system at decreasing speed. Thirty years from now it reaches the turning point (the "aphelion") of its elongated orbit, almost 5,300 million kilometres from the Sun. Although the light reflected from its nucleus will then be 15 times fainter than at the present time, it should still be possible to register its image with one of the 8.2 metre unit telescopes of the ESO Very Large Telescope (VLT) during exposures of only a few hours' duration.

Comet Halley's next return to our neighbourhood will take place in the year 2061. 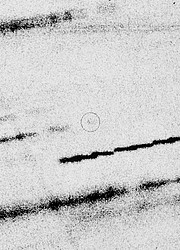