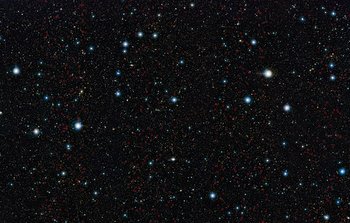 eso1545 — Science Release
The Birth of Monsters
18 November 2015: ESO’s VISTA survey telescope has spied a horde of previously hidden massive galaxies that existed when the Universe was in its infancy. By discovering and studying more of these galaxies than ever before, astronomers have, for the first time, found out exactly when such monster galaxies first appeared.
Read more 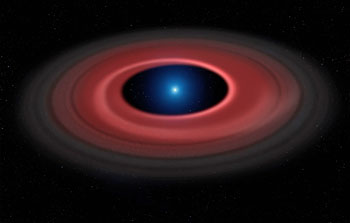 eso1544 — Science Release
The Glowing Halo of a Zombie Star
11 November 2015: The remains of a fatal interaction between a dead star and its asteroid supper have been studied in detail for the first time by an international team of astronomers using the Very Large Telescope at ESO’s Paranal Observatory in Chile. This gives a glimpse of the far-future fate of the Solar System.
Read more 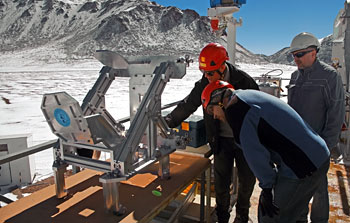 eso1543 — Organisation Release
First Observations from SEPIA
4 November 2015: A new instrument attached to the 12-metre Atacama Pathfinder Experiment (APEX) telescope at 5000 metres above sea level in the Chilean Andes is opening up a previously unexplored window on the Universe. The Swedish–ESO PI receiver for APEX (SEPIA) will detect the faint signals from water and other molecules within the Milky Way, other nearby galaxies and the early Universe.
Read more 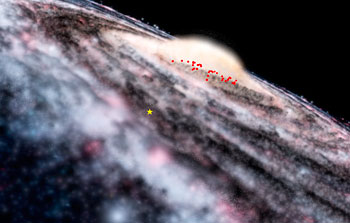 eso1542 — Science Release
VISTA Discovers New Component of Milky Way
28 October 2015: Astronomers using the VISTA telescope at ESO’s Paranal Observatory have discovered a previously unknown component of the Milky Way. By mapping out the locations of a class of stars that vary in brightness called Cepheids, a disc of young stars buried behind thick dust clouds in the central bulge has been found.
Read more 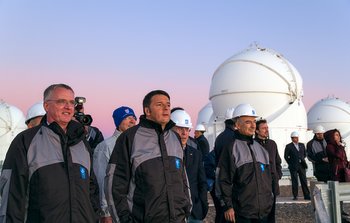 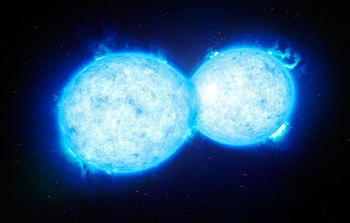 eso1540 — Science Release
Final Kiss of Two Stars Heading for Catastrophe
21 October 2015: Using ESO’s Very Large Telescope, an international team of astronomers have found the hottest and most massive double star with components so close that they touch each other. The two stars in the extreme system VFTS 352 could be heading for a dramatic end, during which the two stars either coalesce to create a single giant star, or form a binary black hole.
Read more 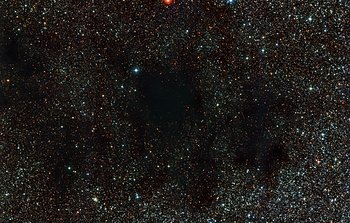 eso1539 — Photo Release
A Cosmic Sackful of Black Coal
14 October 2015: Dark smudges almost block out a rich star field in this new image captured by the Wide Field Imager camera, installed on the MPG/ESO 2.2-metre telescope at ESO’s La Silla Observatory in Chile. The inky areas are small parts of a huge dark nebula known as the Coalsack, one of the most prominent objects of its kind visible to the unaided eye. Millions of years from now, chunks of the Coalsack will ignite, rather like its fossil fuel namesake, with the glow of many young stars.
Read more 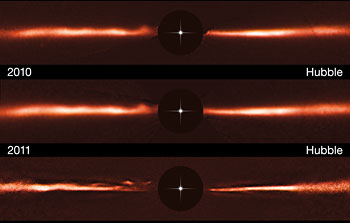 eso1538 — Science Release
Mysterious Ripples Found Racing Through Planet-forming Disc
7 October 2015: Using images from ESO’s Very Large Telescope and the NASA/ESA Hubble Space Telescope, astronomers have discovered never-before-seen structures within a dusty disc surrounding a nearby star. The fast-moving wave-like features in the disc of the star AU Microscopii are unlike anything ever observed, or even predicted, before now. The origin and nature of these features present a new mystery for astronomers to explore. The results are published in the journal Nature on 8 October 2015.
Read more 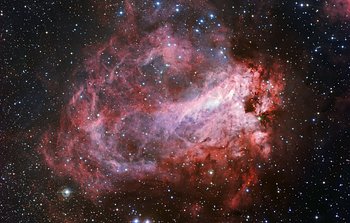 eso1537 — Photo Release
A Cosmic Rose With Many Names
23 September 2015: This new image of the rose-coloured star forming region Messier 17 was captured by the Wide Field Imager on the MPG/ESO 2.2-metre telescope at ESO’s La Silla Observatory in Chile. It is one of the sharpest images showing the entire nebula and not only reveals its full size but also retains fine detail throughout the cosmic landscape of gas clouds, dust and newborn stars.
Read more 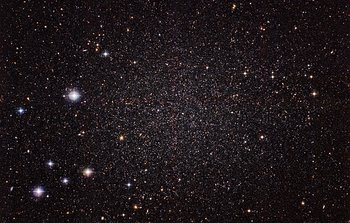 eso1536 — Photo Release
A Shy Galactic Neighbour
16 September 2015: The Sculptor Dwarf Galaxy, pictured in this new image from the Wide Field Imager camera, installed on the 2.2-metre MPG/ESO telescope at ESO’s La Silla Observatory, is a close neighbour of our galaxy, the Milky Way. Despite their close proximity, both galaxies have very distinct histories and characters. This galaxy is much smaller and older than the Milky Way, making it a valuable subject for studying both star and galaxy formation in the early Universe. However, due to its faintness, studying this object is no easy task.
Read more 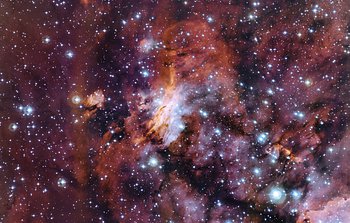 eso1535-en-au — Photo Release
Cosmic Recycling
2 September 2015: Dominating this image is part of the gigantic nebula Gum 56, illuminated by the hot bright young stars that were born within it. For millions of years stars have been created out of the gas in this nebula, material which is later returned to the stellar nursery when the aging stars either expel their material gently into space or eject it more dramatically as supernova explosions. This image was taken with the MPG/ESO 2.2-metre telescope at the La Silla Observatory in Chile as part of ESO’s Cosmic Gems programme.
Read more 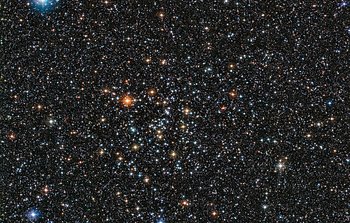 eso1534-en-au — Photo Release
Sibling Stars
19 August 2015: Open star clusters like the one seen here are not just perfect subjects for pretty pictures. Most stars form within clusters and these clusters can be used by astronomers as laboratories to study how stars evolve and die. The cluster captured here by the Wide Field Imager (WFI) at ESO’s La Silla Observatory is known as IC 4651, and the stars born within it now display a wide variety of characteristics.
Read more 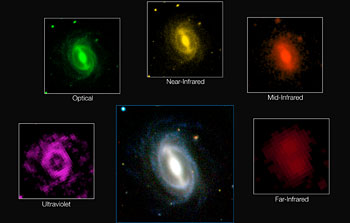 eso1533 — Organisation Release
Charting the Slow Death of the Universe
10 August 2015: An international team of astronomers studying more than 200 000 galaxies has measured the energy generated within a large portion of space more precisely than ever before. This represents the most comprehensive assessment of the energy output of the nearby Universe. They confirm that the energy produced in a section of the Universe today is only about half what it was two billion years ago and find that this fading is occurring across all wavelengths from the ultraviolet to the far infrared. The Universe is slowly dying.
Read more 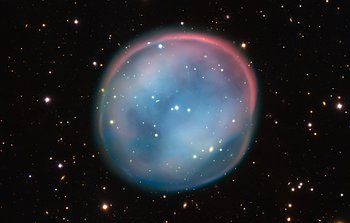 eso1532-en-au — Photo Release
The Ghost of a Dying Star
5 August 2015: This extraordinary bubble, glowing like the ghost of a star in the haunting darkness of space, may appear supernatural and mysterious, but it is a familiar astronomical object: a planetary nebula, the remnants of a dying star. This is the best view of the little-known object ESO 378-1 yet obtained and was captured by ESO's Very Large Telescope in northern Chile.
Read more 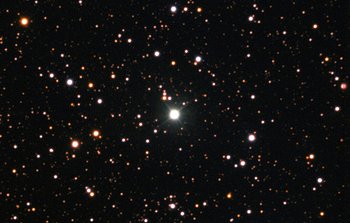 eso1531 — Science Release
First Detection of Lithium from an Exploding Star
29 July 2015: The chemical element lithium has been found for the first time in material ejected by a nova. Observations of Nova Centauri 2013 made using telescopes at ESO’s La Silla Observatory, and near Santiago in Chile, help to explain the mystery of why many young stars seem to have more of this chemical element than expected. This new finding fills in a long-missing piece in the puzzle representing our galaxy’s chemical evolution, and is a big step forward for astronomers trying to understand the amounts of different chemical elements in stars in the Milky Way.
Read more 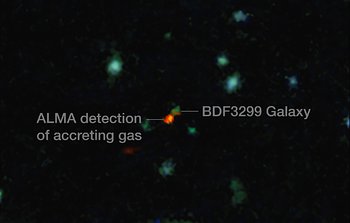 eso1530 — Science Release
ALMA Witnesses Assembly of Galaxies in the Early Universe for the First Time
22 July 2015: The Atacama Large Millimeter/submillimeter Array (ALMA) has been used to detect the most distant clouds of star-forming gas yet found in normal galaxies in the early Universe. The new observations allow astronomers to start to see how the first galaxies were built up and how they cleared the cosmic fog during the era of reionisation. This is the first time that such galaxies are seen as more than just faint blobs.
Read more 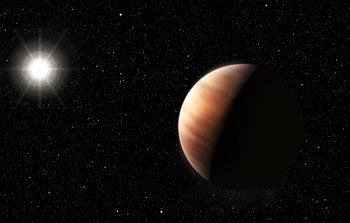 eso1529 — Science Release
Jupiter Twin Discovered Around Solar Twin
15 July 2015: An international group of astronomers has used the ESO 3.6-metre telescope to identify a planet just like Jupiter orbiting at the same distance from a Sun-like star, HIP 11915. According to current theories, the formation of Jupiter-mass planets plays an important role in shaping the architecture of planetary systems. The existence of a Jupiter-mass planet in a Jupiter-like orbit around a Sun-like star opens the possibility that the system of planets around this star may be similar to our own Solar System. HIP 11915 is about the same age as the Sun and, furthermore, its Sun-like composition suggests that there may also be rocky planets orbiting closer to the star.
Read more 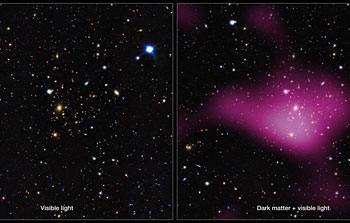 eso1528 — Organisation Release
Huge New Survey to Shine Light on Dark Matter
9 July 2015: The first results have been released from a major new dark matter survey of the southern skies using ESO’s VLT Survey Telescope (VST) at the Paranal Observatory in Chile. The VST KiDS survey will allow astronomers to make precise measurements of dark matter, the structure of galaxy halos, and the evolution of galaxies and clusters. The first KiDS results show how the characteristics of the observed galaxies are determined by the invisible vast clumps of dark matter surrounding them.
Read more 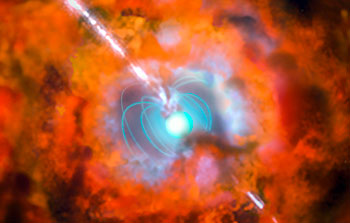 eso1527 — Science Release
Biggest Explosions in the Universe Powered by Strongest Magnets
8 July 2015: Observations from ESO’s La Silla and Paranal Observatories in Chile have for the first time demonstrated a link between a very long-lasting burst of gamma rays and an unusually bright supernova explosion. The results show that the supernova was not driven by radioactive decay, as expected, but was instead powered by the decaying super-strong magnetic fields around an exotic object called a magnetar. The results will appear in the journal Nature on 9 July 2015.
Read more 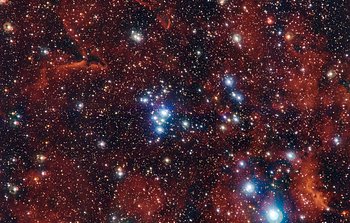 eso1526 — Photo Release
Buried in the Heart of a Giant
1 July 2015: This rich view of an array of colourful stars and gas was captured by the Wide Field Imager (WFI) camera, on the MPG/ESO 2.2-metre telescope at ESO’s La Silla Observatory in Chile. It shows a young open cluster of stars known as NGC 2367, an infant stellar grouping that lies at the centre of an immense and ancient structure on the margins of the Milky Way.
Read more
Showing 201 to 220 of 1296
PreviousNext
Usage of ESO Images, Videos, Web texts and Music