A Galaxy Blooming with New Stars

The VLT Survey Telescope (VST) has captured the beauty of the nearby spiral galaxy NGC 253. The new portrait is probably the most detailed wide-field view of this object and its surroundings ever taken. It demonstrates that the VST, the newest telescope at ESO's Paranal Observatory, provides broad views of the sky while also offering impressive image sharpness.

NGC 253 gleams about eleven and a half million light-years away in the southern constellation of Sculptor. It is often just called the Sculptor Galaxy, although other descriptive names include the Silver Coin or Silver Dollar Galaxy. It is easy to get a good look at NGC 253 through binoculars as it is one of the brightest galaxies in the sky after the Milky Way's closest, big galactic neighbour, the Andromeda Galaxy.

Astronomers have noted the widespread active star formation in NGC 253 and labelled it a "starburst" galaxy [1]. The many bright clumps dotting the galaxy are stellar nurseries where hot young stars have just ignited. The radiation streaming from these giant blue-white babies makes the surrounding hydrogen gas clouds glow brightly (green in this image).

This nearby spiral galaxy was discovered by the German–British astronomer Caroline Herschel, the sister of the famed astronomer William Herschel, as she searched for comets in 1783. The Herschels would have been delighted by the crisp, richly detailed view of NGC 253 that the VST can provide.

This latest image of NGC 253 was taken during VST’s science verification phase — when the telescope’s scientific performance is assessed before it enters operations. The VST data are being combined with infrared images from VISTA (eso0949) to identify the younger generations of stars in NGC 253. This picture is more than 12 000 pixels across and the superb sky conditions at ESO’s Paranal Observatory, combined with the fine telescope optics, result in sharp star images over the entire image.

The VST is a 2.6-metre wide-field survey telescope with a one-degree field of view — twice as broad as the full Moon [2]. The VST programme is a joint venture between the INAF–Osservatorio Astronomico di Capodimonte, Naples, Italy and ESO (eso1119). The 268-megapixel camera OmegaCAM at its heart is designed to map the sky both quickly and with very fine image quality. VST is the largest telescope in the world designed to exclusively survey the sky in visible light, complementing ESO's VISTA infrared survey telescope, also located at Paranal.

Zooming into this new picture not only allows a very detailed inspection of the star-forming spiral arms of the galaxy to be made, but also reveals a very rich tapestry of much more distant galaxies far beyond NGC 253.

[1] Further details about NGC 253 have been revealed by ESO's Very Large Telescope (VLT) along with the NASA/ESA Hubble Space Telescope. These instruments showed in 2009 that, at its centre, NGC 253 harbours  a supermassive black hole with very similar properties to those of  the black hole lurking in the Milky Way's core (see ESO Press Release eso0902).

[2] The image presented here has been cropped and is slightly smaller than the full VST field of view. 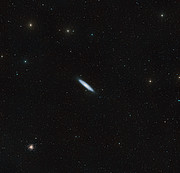 PR Video eso1152a
Zooming in on NGC 253
Send us your comments!
Subscribe to receive news from ESO in your language
Accelerated by CDN77
Terms & Conditions