On 24 November 2011 ESO’s Paranal Observatory in Chile was honoured by a visit from Their Royal Highnesses the Prince and Princess of Asturias.

The delegation, which also included the Spanish Minister of Science and Innovation, Dr. Cristina Garmendia, the Chilean Minister of Foreign Affairs, Alfredo Moreno, and the Chilean Minister of National Assets, Catalina Parot, first had the opportunity to hear a series of presentations about ESO at the Paranal Residencia. This session was also attended by members of the international press.

The ESO Director General, Prof. Tim de Zeeuw, highlighted the challenges of building and operating state-of-the-art astronomical research facilities in one of the driest places on Earth.

“It is a great pleasure to welcome Their Royal Highnesses to the Paranal Observatory”, said Prof. de Zeeuw, “Spain is a highly valued ESO Member State. Spanish industry has made major contributions to the design and construction of ESO facilities, and Spanish astronomers are making impressive use of these world-leading scientific tools.”

The Spanish delegate and vice president of the ESO Council, Prof. Xavier Barcons, further emphasised the strong involvement of the Spanish community in ESO activities. Spain has taken a significant role in the design studies for the forthcoming E-ELT and has also been awarded large contracts to build parts of ALMA, the Atacama Large Millimeter/submillimeter Array.

The Spanish astronomer and ESO Deputy Director of Operations, Dr. Fernando Comerón, described some of the most important discoveries made with the ESO Very Large Telescope (VLT), including the first direct image of an exoplanet ever made and the confirmation of the existence of a supermassive black hole in the centre of the Milky Way.

The Prince and Princess were then shown around the VLT itself, the world’s most advanced optical instrument. They also got a rare chance to visit the interferometric tunnels underneath the telescopes. In these tunnels, the light beams gathered by the VLT Unit Telescopes are combined, allowing astronomers to see details up to 17 times finer than is possible with the individual telescopes.

The distinguished visitors were also shown the VLT control room, where ESO Spanish astronomers explained the operation of the telescopes.

The visit of the Prince and Princess of Asturias was also hosted by the ESO Representative in Chile, Prof. Massimo Tarenghi and the director of the observatory Dr Andreas Kaufer.

Spain joined ESO in 2006 and there are currently 32 Spanish nationals employed by the organisation. 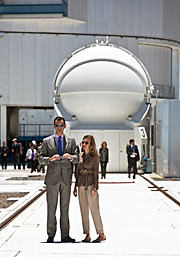 PR Video eso1146a
The visit of the Prince and Princess of Asturias to ESO's Paranal Observatory
Send us your comments!
Subscribe to receive news from ESO in your language
Accelerated by CDN77
Terms & Conditions