Of trails and telescopes 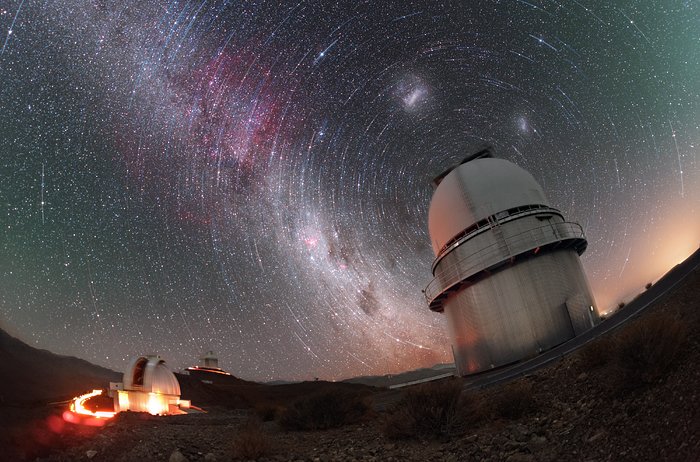 Of course, this is a highly distorted view of the telescopes! This photograph was taken by ESO Photo Ambassador Petr Horálek to emphasise not the telescopes themselves but the stunning features of the night sky above the observatory site, which is one of the best in the world. This is a long-exposure shot intended to capture the apparent motion of the stars as they circle slowly overhead in the sky. Over time, the stars appear to drag out trails of light in the sky — known as star trails — painting large circles onto the dark cosmos (this phenomenon is actually caused by the rotation of the Earth, not by the movement of the stars themselves)

The star trails shown here are centred on a point in the sky known as the south celestial pole, which here hides behind the dome of the Danish 1.54-metre telescope. The celestial pole is a point on the sky aligned with the rotational axis of our planet. These trails were actually captured in a separate image which was then combined with the image of the telescopes, adding a rather disconcerting spinning sensation to the resulting composite. The image also highlights the majesty of the Milky Way as it snakes across the sky, accompanied by the Large and Small Magellanic clouds (the two bright smudges).