Road to the Milky Way at La Silla 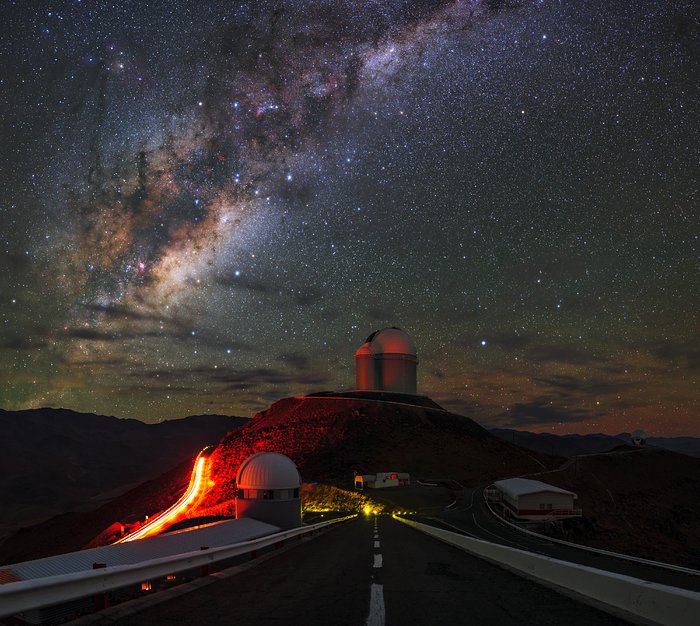 In this picture, our home galaxy the Milky Way stretches across the sky above the landscape of the Chilean Andes. In the foreground, the roads of ESO’s La Silla Observatory are packed with state-of-the-art astronomical telescopes pointing towards, and far beyond, the Milky Way.

Several multinational telescopes are captured in this frame. The ESO 3.6-metre telescope stands on the central pedestal and is mounted with the High Accuracy Radial velocity Planet Searcher (HARPS) — the best exoplanet finder on Earth. Just next to the main dome, the smaller one once hosted the Coudé Auxiliary Telescope (CAT) which used to feed the powerful Coudé Echelle Spectrograph; they are now both decommissioned. At the foot of this pedestal lies the French Rapid Action Telescope for Transient Objects (TAROT) which follows up on highly energetic events called gamma-ray bursts. These are also studied by the Swiss 1.2-metre Leonhard Euler Telescope in the dome on the left, but its focus lies on the search for exoplanets.

Further out in the right, one can spot the Swedish–ESO Submillimetre Telescope (SEST) that was decommissioned in 2003 and replaced by the Atacama Pathfinder EXperiment telescope (APEX) on the Chajnantor Plateau. A map of all the La Silla facilities can be found here.

The high density of instruments on the roads of La Silla shows how desirable this location is for astronomical observations. It is far from brightly lit cities — the dramatic effect of dim brake lights of a single car can be seen on the left — and lies at a high altitude.

This image was taken by ESO Photo Ambassador, Babak Tafreshi.