Have you ever read the term ‘Earth-like’ exoplanet and thought ‘wow, I could move there!’? How about ‘no, it rains iron’. As a casual observer, some astronomical terms can be strange or misleading. In this ESO blog, we talk you through some of these terms so that you can navigate astronomical terminology like a true professional.

Astronomers often refer to stars as ‘early’ or ‘late’ types. Early-type stars are generally hot and blue, whereas late-type ones are colder and red. While these names may suggest something about the star’s age, this is not the truth. This is actually an archaic remnant of a model of stellar evolution proposed in the 1800s that suggested early-type hot stars would gradually cool down and shrink to become late-type stars. This model was based on a physical process known as the Kelvin-Helmholtz mechanism, whereby objects radiate energy as they contract, which was thought to be the reason why stars shine. But if this was the case then the Sun could not have been shining for more than a few million years, whereas geological records showed that the Earth was several billions years old. Even though this idea was eventually abandoned, the early/late terminology has survived.

The last nail in the coffin for ‘early’ and ‘late’ type stars was the discovery that stars are fueled by nuclear fusion. In a star, light atoms such as hydrogen are forced together in the star's core under tremendous temperature and pressure due to gravity. This causes them to fuse into heavier elements (in the case of hydrogen, into helium), releasing immense amounts of energy. This causes stars like our Sun to shine brightly (once the energy reaches the surface, which can take hundreds of thousands of years). Because fusion ‘fuels’ stars, astronomers often refer to this process as burning, so you might hear that a star is ‘burning hydrogen’. However, this shouldn’t be confused with ‘burning’ as used on Earth (the kind involving oxygen and a matchbox) as both processes are totally unrelated.

Astronomers are often at odds over how to define a planet in our Solar System. Many believe that planets are bodies massive enough to pull themselves together into hydrostatic equilibrium; this means that the gravity of the planet is enough to balance the outward pressure of the planetary material, so the planet ends up with a nearly spherical shape. But others impose additional requirements.

For instance, the definition by the International Astronomical Union (IAU) requires that, in addition to being in equilibrium and nearly round, planets must also orbit our Sun and have ‘cleared their neighbourhood’, removing other astronomical bodies from their path. So technically, there are only eight planets, as Pluto does not fulfil the third criterion.

What about exoplanets, which orbit stars other than the Sun? As per the IAU definition, exoplanets aren’t formally planets as they don’t revolve around our Sun. They have instead their own separate definition. Just like Solar System planets, they must be massive enough but not so massive to undergo nuclear fusion, which happens above 13 times the mass of Jupiter. Moreover, they can orbit objects that aren’t stars, like brown dwarfs or stellar corpses. But they must orbit something, which means that the so-called rogue planets aren’t strictly speaking planets

Other planet-based terminology that can also be misleading:

You may believe that a ‘habitable’ exoplanet is one on which we could live. Not quite! Planetary habitability is a measure of how much potential a planet or moon has to develop and maintain environments that are hospitable to life. This often only implies that a planet has the possibility of having liquid water. But this definition is based on our sole example (so far) of life in the Universe: Earth. As we learn more about life, our definition of ‘habitable’ may have to be revised.

Building on the idea of ‘habitable’, the habitable zone or ‘Goldilocks zone’ is the range of orbits around a star at which the surface of a planet or moon can support liquid water, if there is sufficient pressure from the atmosphere. The latter bit is important: our Moon is obviously within the Sun’s habitable zone, but it can’t host liquid water because it lacks an atmosphere.

This term, as it suggests, usually refers to a planet or moon that is ‘like Earth’, or has environmentally similar conditions to those found on our home planet. The difficulty with this term arises when describing what ‘like Earth’ is. Most of the time the only observable properties that we can measure in exoplanets are its mass and size. But think of Venus: it has pretty much the same size and mass as the Earth, but it’s a scorching hell covered with thick clouds of sulphuric acid. Definitely not like Earth! As a result, just because we refer to a planet as ‘Earth-like’ doesn’t necessarily mean it’s all that much like Earth.

You might think this one was easy: planetary nebula, therefore, nebula involving planets! Unfortunately, you would be incorrect. The term planetary nebula refers to the expanding and glowing shell of gas that many stars shed in the later stages of their evolution. The name arose because many of these nebulae have round shapes that made them look like planets in the early days of telescope usage. Funnily enough, many planetary nebulae aren’t even round, and instead have symmetric shapes like an hourglass or a butterfly. But, as with many other terms in this list, the name has survived.

How we measure things

We have to begin with a classic: the light-year. Like many units of measurement in astronomy, the confusion arises from the word ‘year’, which may suggest that it’s a unit of time. Instead, the light-year refers to the distance that light (or any electromagnetic radiation) can travel in a year in vacuum: about ​​9.46 trillion kilometres.

Like the light-year, arcminutes and arcseconds may at first appear to be units of time but they are instead units to measure angles. If you think of there being 360 degrees in the full turn of a circle, an arcminute is 1/60th of a degree and an arcseconds is 1/60th of an arcminute. Astronomers often use these units to measure the apparent size of astronomical objects as seen from Earth; for instance, the Moon is about 30 arcminutes wide. 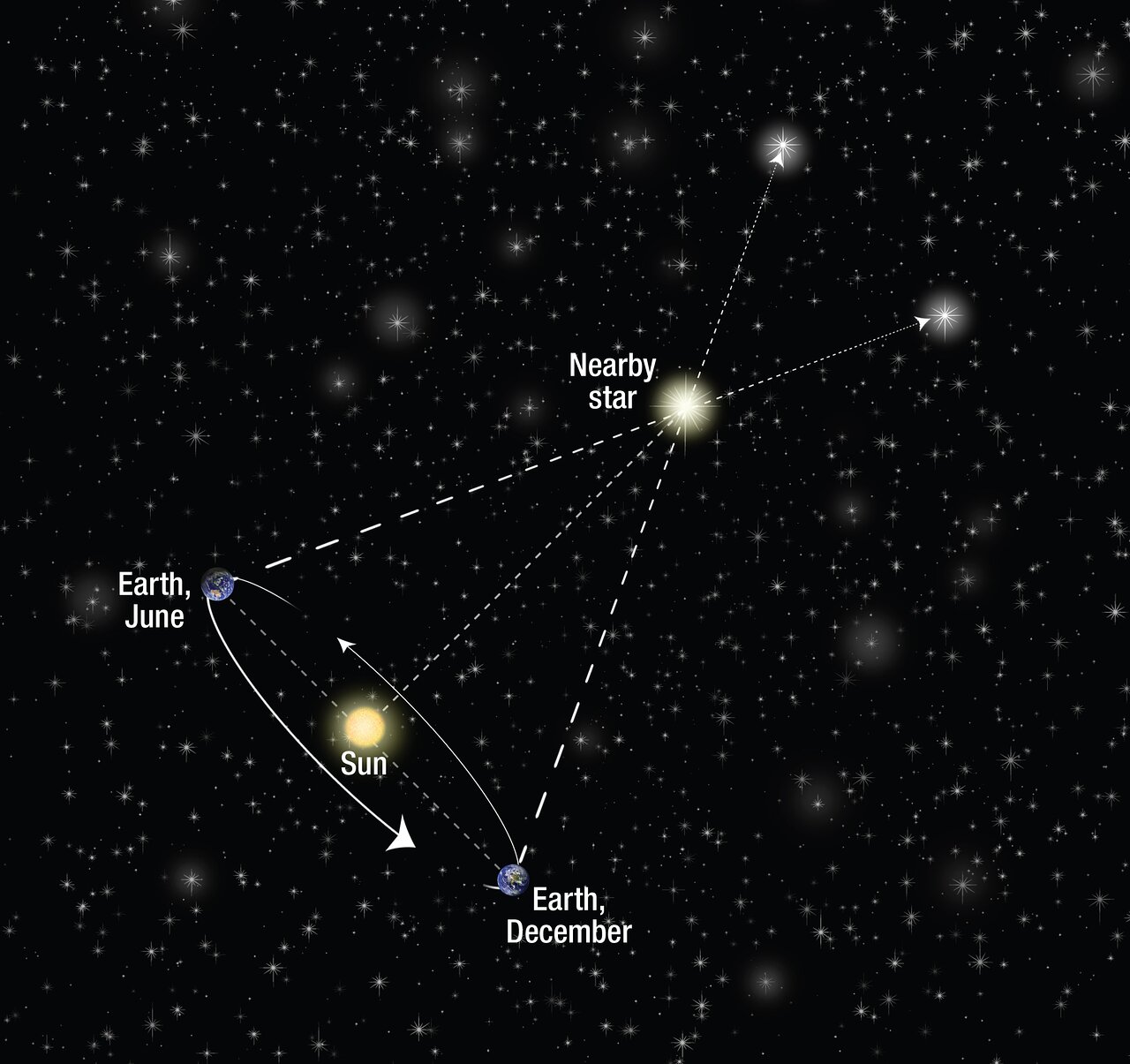 llustration of how parallax works. As the Earth orbits the Sun, the apparent position of a nearby star relative to more distant stars changes. If the angle Sun-star-Earth is 1 arcsecond, the distance to the star is 1 parsec.
Credit: NASA, ESA and A. Feild (STScI)

Parsecs are so famously confusing that a whole franchise of Star Wars fans have argued about it since the 1970s, and that a whole film was dedicated to re-explaining it. So, what is a parsec? It’s a short form of “parallax second”, which again could make you think this is a unit of time when it is in fact a unit of distance. One parsec is the distance from which the separation between the Sun and the Earth would appear to be one arcsecond wide in the sky. It is approximately equal to 3.26 lightyears. This apparently convoluted way to define a unit of distance isn’t random, though. As the Earth moves around the Sun, nearby stars appear to move against the background of more distant stars. This apparent motion is called parallax, and it’s a powerful way to measure the distance to stars.

To round off, there are some final terms which may prove confusing to the astronomy enthusiast but which don’t fall into the above categories. So we list a couple of them here.

You are aware of a metal on Earth. Think of what a sword is made out of, or a can of soda, or even the keys to unlock your house. The shiny thing that conducts electricity and is sometimes magnetic. In astronomy, however, things are different. In space, where much of the matter is hydrogen and helium, the term ‘metals’ is commonly used to describe any element that isn’t hydrogen or helium. Stars and other nebulae that have lots of heavy elements are usually referred to as ‘metal-rich’ and the abundance of these heavy elements within a system is called ‘metallicity’. This is despite most of these elements –– like carbon, nitrogen or oxygen –– not obeying the regular definitions of metal that chemists and physicists use on Earth.

Rather like early- and late-type stars, astronomers use ‘early’ and ‘late’ to refer to the structure of galaxies. Early-type galaxies tend to refer to elliptical galaxies, usually red and featureless, whereas late-type refer to spiral and irregular galaxies, bluer and with a richer structure. The nomenclature comes from Edwin Hubble who, in an early attempt to find some order within the plethora of shapes we see in galaxies, arranged them along a diagram now known as Hubble’s Tuning Fork. Fun fact: even though Hubble himself explicitly warned against using this to infer any sort of evolutionary trends, for quite some time astronomers thought that galaxies did evolve from left to right in this diagram. We now know that is not the case; if anything, when two spirals merge the resulting galaxy will often be an elliptical galaxy. But for the most part galaxies with different morphologies evolve in different ways. 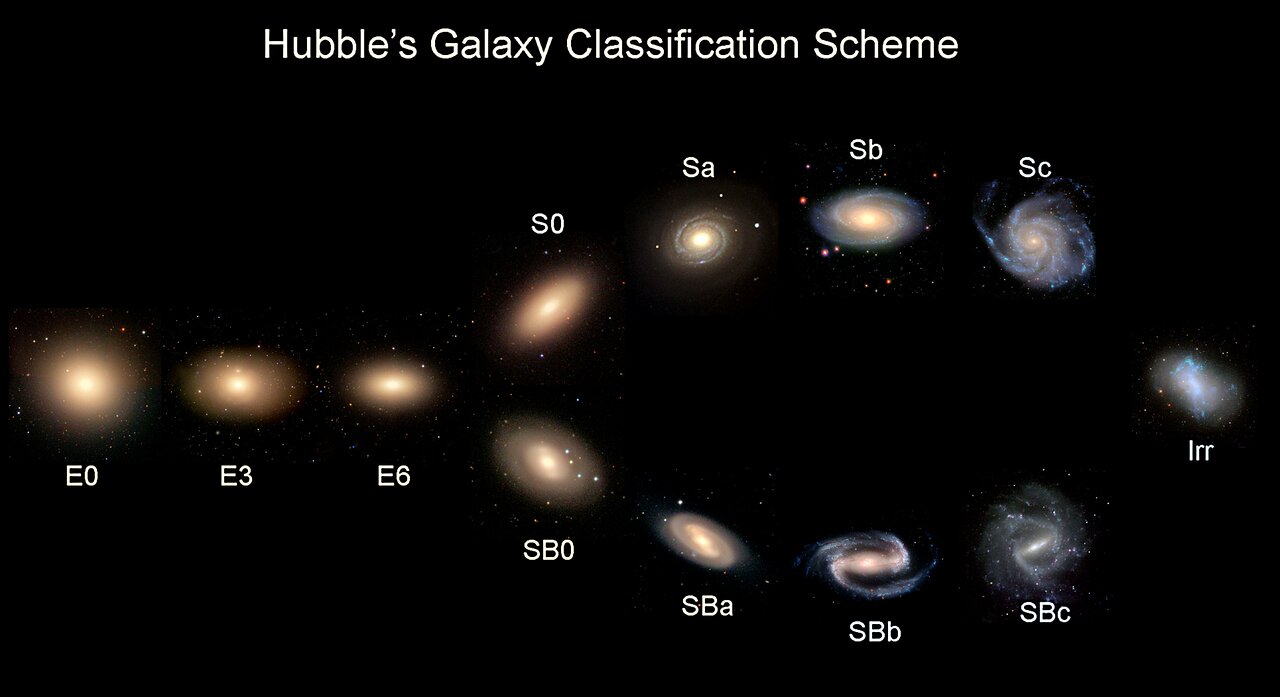 Hubble’s tuning fork diagram, called like that due to its resemblance to the device used to tune musical instruments. Galaxies to the left are referred to as early-type galaxies, whereas those to the right are late-type ones. Despite this nomenclature, galaxies do not evolve from left to right in this diagram.
Credit: Zoouniverse 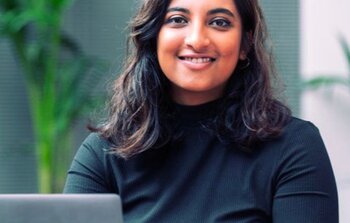 Anita Chandran is a science journalism intern at ESO. She recently completed her PhD in laser physics at Imperial College London, where she also worked with the science communication department on the ethics of artificial intelligence. She is a writer and editor, having co-founding Tamarind, a literary magazine focusing on the intersections between the arts and sciences.