Is there life elsewhere in the Universe?

The newest addition to the ESO Supernova Planetarium & Visitor Centre’s programme, the show Out There — The Quest for Extrasolar Worlds, invites you to discover humanity’s quest for life on other planets, as we try to understand whether life in the Universe is the norm or the exception. Are you curious to learn how science caught up with fiction, what planets we first explored and how we discover new extrasolar planets nowadays? Then book your place at a show starting on 28 October 2019, in either German or English.

For thousands of years, mankind thought that the Earth was the centre of the Universe. Thanks to our curiosity, imagination and urge to explore, we now know that planets around stars are nothing special in the cosmos. The Sun is just one ordinary star among hundreds of billions in our galaxy, the Milky Way.

With the world’s most powerful telescopes we are able to explore more and more of the Universe. What we have found so far has surpassed even the wildest expectations of both scientists and authors of science fiction. Most stars have planets — it turns out they are more common than we thought.

Out There — The Quest for Extrasolar Worlds tells the story of how human curiosity has driven us to look outwards for millennia, to discover and explore new and distant worlds and to search for the unfamiliar and extraordinary forms of life that could exist in the mysterious realms of the Universe.

Learn more about the fascinating diversity of alien worlds in this production by The Swiss Museum of Transport Planetarium in cooperation with NCCR PlanetS and the European Southern Observatory (ESO), which blends breathtaking fulldome footage and state-of-the-art animation in a captivating exploration of extrasolar worlds.

The show lasts approximately 50 minutes and is suitable for a general audience, from 10 years of age. Tickets costs 5 euros and can be booked online.

The ESO Supernova Planetarium & Visitor Centre is a cutting-edge astronomy centre for the public and an educational facility, located at the site of the ESO Headquarters in Garching bei München. The centre hosts the largest tilted planetarium in Germany, Austria and Switzerland and an interactive exhibition, sharing the fascinating world of astronomy and ESO to inspire coming generations to appreciate and understand the Universe around us. All content is provided in English and German. Entrance to the exhibition is free, and requires no prior booking. For planetarium shows, guided tours and other activities, visitors need to book and pay for their tickets online. For more details visit: supernova.eso.org 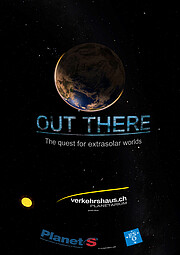 PR Image ann19048a
"Out There" poster (English version)
Send us your comments!
Subscribe to receive news from ESO in your language
Accelerated by CDN77
Terms & Conditions