ESO is proud to announce the release of Europe to the Stars, a brand new open-source planetarium show that tells the story of ESO’s exploration of the southern sky. This stunning movie takes viewers on an epic journey behind the scenes of the most productive ground-based observatory in the world. Europe to the Stars will be part of the programme at the ESO Supernova from Friday 22 June and is available to download for free from the ESO website.

ESO’s latest planetarium movie Europe to the Stars is now available to download for free in fulldome format. Expressing cosmic curiosity, courage and perseverance, Europe to the Stars captures the story of ESO’s epic adventure — the story of discovering a Universe of deep mysteries and hidden secrets, and the story of designing, building and operating the most powerful ground-based telescopes on the planet. The film takes viewers on a journey of discovery, focussing on essential aspects of how an astronomical observatory works, while simultaneously offering a broader view of astronomy as a science.

This is the latest film to be added to ESO’s large range of free, high-quality planetarium materials produced by world-renowned astrophotographers, artists, technicians and musicians. The full range of free material is available on the ESO Supernova website. This includes full planetarium shows, almost 500 fulldome clips from the ESO and ESA/Hubble archives, 360-degree panoramas, a new music archive with almost 500 free music tracks, 3D models and much more. ESO’s Head of Outreach and director of the film, Lars Lindberg Christensen, adds “ESO’s collection contributes to the continued success of the planetarium community worldwide, and we are proud and excited to add Europe to the Stars to this collection.”

Europe to the Stars will be shown regularly in the planetarium of the ESO Supernova Planetarium & Visitor Centre from Friday 22 June 2018. The performances, some of which will be in German and some in English, are free of charge in 2018 and are aimed at the general public, including children over 8 years old. More information about the show, as well as the link to book tickets for the performance, can be found here. It is recommended to reserve seats in advance, and tickets can then be printed on site. To see the full range of activities on offer at the ESO Supernova and to book a place at any future events, please use the following link.

ESO is the foremost intergovernmental astronomy organisation in Europe and the world’s most productive ground-based astronomical observatory by far. It has 15 Member States: Austria, Belgium, the Czech Republic, Denmark, France, Finland, Germany, Italy, the Netherlands, Poland, Portugal, Spain, Sweden, Switzerland and the United Kingdom, along with the host state of Chile and with Australia as a strategic partner. ESO carries out an ambitious programme focused on the design, construction and operation of powerful ground-based observing facilities, enabling astronomers to make important scientific discoveries. ESO also plays a leading role in promoting and organising cooperation in astronomical research. ESO operates three unique world-class observing sites in Chile: La Silla, Paranal and Chajnantor. At Paranal, ESO operates the Very Large Telescope, the world’s most advanced visible-light astronomical observatory, and two survey telescopes. VISTA works in the infrared and is the world’s largest survey telescope and the VLT Survey Telescope is the largest telescope designed to exclusively survey the skies in visible light. ESO is a major partner in ALMA, the largest astronomical project in existence. And on Cerro Armazones, close to Paranal, ESO is building the 39-metre Extremely Large Telescope, the ELT, which will become “the world’s biggest eye on the sky”. 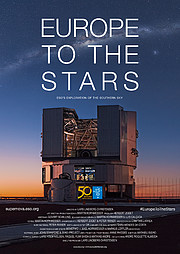 PR Image ann18043d
Sunny Supernova
Send us your comments!
Subscribe to receive news from ESO in your language
Accelerated by CDN77
Terms & Conditions