The Spectacular Jet in Comet Hale-Bopp

A new image of comet Hale-Bopp, taken at ESO's observatory in La Silla, sheds new light on the structure of this peculiar comet.

This false-colour image of the large jet now observed in bright comet Hale-Bopp is a computer-enhanced version of a near-IR CCD-frame. It was obtained on August 31 with the multi-mode DFOSC instrument at the Danish 1.5-m telescope on La Silla by Emilio Molinari from Osservatorio di Brera, Milano-Merate, Italy. On this photo, North is up and East is to the left. One pixel measures 0.5 arcsec and the circular field has a diameter of 65 arcsec. The intensity scale is indicated with the colour bar at the bottom; the intensity increases towards the right.

The exposure lasted 5 minutes and was made through a gunn-i filter, recording the reflected sunlight from the dusty coma of the comet at a wavelength of about 9000 A (900 nm). The observing conditions were excellent (seeing 0.8 arcsec).

The frame was transmitted over the satellite link to the ESO Headquarters in Garching (Germany) where it was processed on the MIDAS system by Hans Ulrich Kaeufl (ESO). In order to isolate the light from the jet, the stars were partially removed and the symmetrical part of the coma was subtracted. In this way, only the asymmetrical structures in the frame, including the image of the jet, are left. The brightest part of the coma, in which the comet's nucleus is located, is seen as a white spot at the centre.

The image shows that the jet emerges at a distance of about 3 arcsec North-West from the centre, curves towards North and then abruptly bends 90 deg towards North-East. The same structure is seen on another image, obtained on September 1 with the same instrumentation. Thus, no clear signs of rotation of the nucleus can be perceived from these observations. 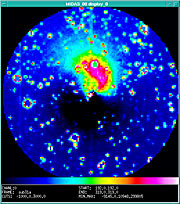