While much attention is now directed towards the VLT Opening Symposium that will take place in Antofagasta on 1-4 March 1999, assembly work on the VLT Unit Telescopes proceeds at Paranal.

The first of these, UT1 , is undergoing thorough adjustment and the last series of tests, before the start of regular observations with the VLT on April 1, 1999. Recent observations were carried out in connection with the commissioning and science verification programmes for the two major instruments, FORS1 and ISAAC. Some of the data and the scientific results that have come from them will be presented during the Symposium and will also be the subject of an ESO Press Release to be issued in connection with the meeting.

It has been decided to install the third 8.2-m Zerodur mirror, just arrived from Europe into the second M1 Cell and attach it to UT2 this week. For this, the cell with the concrete dummy mirror in place for tests and balancing, was detached from the UT2 telescope structure and brought down to the Mirror Maintenance Building (MMB) at the Base Camp. The Zerodur mirror was lifted from its transport box and placed in the coating chamber. The plastic cover that has protected the delicate optical surface since it left the REOSC factory in Paris, was removed. The mirror was thoroughly checked by ESO's opticians and found to be in order. It was successfully coated with a thin layer of aluminium and placed in its mirror cell. It was prepared for the transpor to the UT2 in the afternoon of February 25. Following careful optical alignment and further system tests, everything should then be ready for the UT2 First Light event in March.

The UT3 structure is nearing completion. Remaining is the final electrical connection and setup of some of the telescope and enclosure sub-systems. The contractor's commissioning and testing has started. ESO integration work has begun with the installation and connection of the telescope control hardware. Meanwhile, the M1 Cell for UT3 is due to arrive in Paranal in a few days. It will then be re-integrated and tested before installation on the UT3 with the concrete 8.2-m dummy mirror that was only recently removed from UT2.

The UT4 azimuth baseframe and intermediate towers have now been installed.

Here are a few related electronic photos, obtained by ESO staff at Paranal during the recent operations.

For the most recent news about the VLT Project, please look at the VLT Information webpage.

PR Image eso9910d
The dummy mirror in the UT2 structure 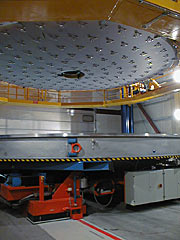