Observations of famous Comet Hale-Bopp continue with the 15-m Swedish-ESO Submillimetre Telescope (SEST) at the La Silla Observatory. They show amazingly strong activity of this unusual object, also at the present, very large distance from the Sun. The radio observations document in detail the release of various molecules from the comet's icy nucleus. Of particular interest is the observed emission from methanol (CH 3 OH) and hydrogen cyanide (HCN) molecules, never before detected in any comet this far away.

Just over 18 months after its perihelion passage on April 1, 1997, Comet Hale-Bopp (official designation C/1995 O1) is continuing its outward journey through the Solar System. It is now about 1,000 million kilometres (6.7 AU) from the Sun and the Earth, i.e. almost at the same distance as when it was first discovered in July 1995.

After having traversed the northern sky in 1996 and 1997, the comet passed the celestial equator in late June 1997 and is now seen in the southern constellation Volans (The Flying Fish), i.e. just east of the Large Magellanic Cloud. It can only be observed from southern latitudes.

The comet's brightness has decreased by a factor of more than 10,000 since it was at its brightest in March 1997, just before perihelion. However, the magnitude is still around 9 - 10, or only about 20-40 times fainter than what can be seen with the unaided eye. Hale-Bopp is therefore visible in binoculars to southern observers as a fuzzy object with a diameter of a few arcminutes.

Several telescopes at La Silla are following the evolution of the activity of Comet Hale-Bopp as it recedes from the Sun. In particular, the comet is observed monthly with SEST, a 15-m diameter submillimetre telescope operated jointly by the Onsala Space Observatory (OSO, Chalmers University of Technology, Gothenburg, Sweden) and ESO; it is the only telescope of its type in the southern hemisphere.

Alternating each month, a Swedish team (headed by Anders Winnberg, OSO) and a European team (headed by Dominique Bockelée-Morvan, Observatoire de Paris) observe emission lines in the radio region of the spectrum from some of the molecules in the comet's coma (the cloud of gas and dust around the cometary "dirty-snowball" nucleus). These data are of great importance for understanding the mechanisms that are responsible for the outgassing (sublimation) of ices inside the nucleus of Comet Hale-Bopp.

The observations began at SEST in September 1997 and constitute a follow-up programme of a long-term monitoring project at radio wavelengths that was started in August 1995 at the telescopes of the Institut de RadioAstronomie Millimétrique (IRAM), the James Clerk Maxwell Telescope (JCMT), the Caltech Submillimeter Observatory (CSO) and the Nançay radio telescope by several teams of astronomers in Europe and US [1]. Radio emission from nine molecules in the coma were studied: H 2 O (water; by means of observations of the radical OH), CO (carbon monoxide), CH 3 OH (methanol), H 2 CO (formaldehyde), HCN (hydrogen cyanide), HNC (isomeric hydrogen cyanide), CH 3 CN (methyl cyanide), H 2 S (hydrogen sulphide) and CS (carbon sulphide).

Detection of methanol and hydrogen cyanide at record distance

Observations at SEST were performed in July and August 1998 by Emmanuel Lellouch (Observatoire de Paris) and Marcus Gunnarsson (Uppsala Astronomiska Observatorium, Sweden), respectively. Three molecules were still detected : carbon monoxide (CO) at 230 GHz, hydrogen cyanide (HCN) at 89 GHz and methanol (CH 3 OH) at 145 GHz. On August 11, when Hale-Bopp was just over 900 million km (6 AU) from the Sun, no less than 2.4 · 10 28 CO molecules were released by the comet per second, corresponding to 1100 kg per second.

The measured production rates of HCN and CH 3 OH were about 200 and 20 times smaller, respectively. The observations of these two organic species at SEST constitute the most distant detections ever made in any comet.

The sublimation of water, the main constituent of cometary ices, is responsible for cometary activity within 3-4 AU from the Sun. However, at larger distances, this process ceases, due to the low temperature of the nucleus. At the present large distance from the Sun, the CO molecule is now the prime source of activity of Hale-Bopp.

When Comet Hale-Bopp was approaching the Sun before perihelion passage in 1997, the long-term monitoring programmes - in the radio wavelength region as well as in other spectral domains - clearly showed the transition from a CO - to a water-dominated coma, at about the time the comet came within 3-4 AU from the Sun. The CO -production rate now measured at SEST at 6 AU on the outward leg is about 100 times less than that at perihelion, and close to the value measured at the same distance from the Sun before perihelion.

While CO was first detected in Hale-Bopp in September 1995 at 6.8 AU from the Sun, only a few weeks after the discovery, HCN and CH 3 OH were not detected until a few months later, when the comet had approached to within 4.8-4.9 AU. It is likely that the convincing detection of these two molecules in August 1998 benefitted from an outburst (a sudden release of material from the nucleus) on August 15-19.

Some other species were observed at SEST out to a distance of 3-4 AU (H 2 S, CS, H 2 CO), but they are no longer easily detectable due to low production rates and the SEST sensitivity limit.

New data may provide a "look into the nucleus"

Comet Hale-Bopp provided the first opportunity in modern times to follow the activity of a comet over a very large range of heliocentric distances. The new data trace the gas release in some detail as the temperature and insolation change when the comet moves along its orbit. They show similarities and differences between individual molecules that in turn contain useful information about the physical state of cometary ices in the nucleus and its internal structure.

Some of the current key questions in this research field are concerned with the degree of separation of different ices ("chemical differentiation") in the upper layers of the nucleus, the form under which these ices co-exist and, not least, the still not understood production mechanisms at large heliocentric distances. These new observations will provide very valuable support to the theoretical studies of the cometary nucleus, now being undertaken by several research groups around the world.

The new observations of molecular lines in the radio spectral region also provide information about the temperature in the coma, if several lines of the same species are observed. Moreover, they serve to measure the expansion velocity of the gas and the outgassing pattern of the nucleus.

For instance, the observations of CH 3 OH in August 1998 show that the coma is now very cold at about 16 K (-257 o C). At perihelion (0.9 AU from the Sun), the corresponding temperature was of the order of 110 K (-163 o C). The expansion velocity has also considerably decreased since perihelion, from 1.1 km/sec to 0.5 km/sec. There is also evidence of anisotropic outgassing : more gas is seen to be flowing out from the sunlit hemisphere of the nucleus.

The monitoring of Comet Hale-Bopp at the SEST telescope will continue, at least until March 1999. The comet will then be nearly 1,200 million km (7.9 AU) from the Sun.

Observations are also made from time to time with other telescopes at La Silla. As an example, eso9849c was obtained a few days ago with the Danish 1.5-m telescope. It shows that a very complex coma structure is still present.

Due to the large size of the nucleus, probably 40 - 60 km in diameter, it will be possible to observe this comet with large optical telescopes for many years to come.

Information about Hale-Bopp on the web

Additional information about Comet Hale-Bopp is available on the web at many sites. Some of the most comprehensive websites may be accessed via the ESO Hale-Bopp site.

[2] The figure appears in N. Biver et al. : "Long-term Monitoring of the Outgassing of C/1995 O1 (Hale-Bopp) at Radio Wavelengths", a poster paper presented at the DPS meeting on October 11-16, 1998 (Madison, Wisconsin, USA) and to be published in Vol. 30 of the Bulletin of the American Astronomical Society . 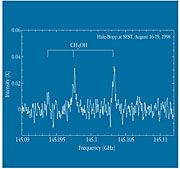 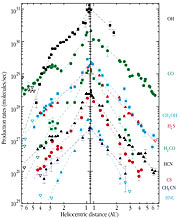 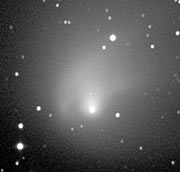 PR Image eso9849c
Observations of comet Hale-Bopp from La Silla
Send us your comments!
Subscribe to receive news from ESO in your language
Accelerated by CDN77
Terms & Conditions