VLT Unit Telescope 1 in its Enclosure

A wide-angle photograph has been obtained that shows for the first time the complete structure of the first 8.2-metre VLT Unit Telescope (UT1) in its enclosure on Paranal.

The photo is available here in three versions of different size and resolution. It was obtained on the day of VLT UT1 First Light (May 25, 1998) by ESO photographer Herbert Zodet, using special equipment to achieve the necessary view and photographic sharpness in the narrow space available within the enclosure. There is an unavoidable distortion of perspective due to the extreme angle.

Note in particular the simultaneous visibility of the primary and the secondary mirrors and the amount of detail of the lateral supports of the active optics system at the primary mirror. The Test Camera with which the First Light images were obtained, is seen at the bottom of the M1 Cell (that supports the primary mirror). 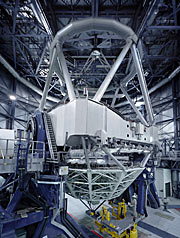 PR Image eso9822a
VLT Unit Telescope 1 in its enclosure
Send us your comments!
Subscribe to receive news from ESO in your language
Accelerated by CDN77
Terms & Conditions