The assembly work on the first VLT 8.2-m Unit Telescope (UT1) at Paranal is now entering the final phases. The excellent progress continues and the project is on schedule for the First Light Event in late May.

Some days ago, the M2 Unit was mounted on the UT1. This is the electro-mechanical assembly that supports the 1.2-m secondary Beryllium mirror at the top of the telescope `tube'. To avoid any risks to the real mirror, a dummy mirror with the same mechanical characteristics was used during this operation. The real one is already at Paranal and will be installed later. The light-weight metal Beryllium was chosen to keep the weight of this moving mirror at a minimum. This is the first time that such a large mirror of this exotic material has been manufactured.

The present photos were obtained during the mechanical assembly onto the top-end spiders that support the M2 Unit. For this the telescope was moved to a horizontal position. This means that the primary (at this moment, concrete dummy) mirror was tilted to a vertical position, thus resting almost entirely on the lateral supports.

No particular problems were encountered and the entire operation went smoothly. It was followed by several days of work in order to connect the associated electrical cables, signal fibers and also the cooling system.

Last week was also installed the first of the Nasmyth Adapter-Rotators on one side of the telescope (it will compensate for the sky field rotation that is inherent in the VLT alt-az mounting). The cables to this complex device have been connected and it is now ready for operation, cf. the photos from this operation, also included in this series.

The testing of the Telescope Control System (TCS) software has also started and will continue for some time. All sub-systems (e.g., telescope rotation axes, Cassegrain adaptor-rotator, M1 Cell and M2 Unit) are now integrated and are being controlled by this software. This system will enable the telescope to follow with extreme precision the motion of an astronomical object across the sky as the Earth rotates.

Finally, a small amateur telescope with 20-cm aperture and a PC-driven CCD camera were fitted to the heavy telescope centerpiece. It will be used for the preliminary pointing tests that will ensure that the telescope structure is correctly positioned in relation to the sky.

The installation of the main mirrors will begin in April, leading up to the UT1 First Light Event, now expected in the second half of May.

More information about the Very Large Telescope (VLT) project is available on the ESO Web. 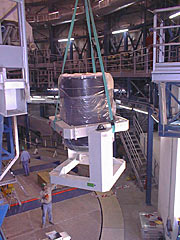