High-resolution Photos from the Paranal Observatory

They were obtained in December 1997 with a 6x6 cm Hasselblad camera by one of the professional photographers of the ESO EPR team. They have been selected with the specific purpose of providing editors with a choice of different views of ESO's new observatory at the present construction stage. It is here that the first of the four giant VLT 8.2-m Unit Telescopes (UT1) will enter into operation within a few months (the UT1 First Light Event).

For convenience, the present photos are also available in a smaller preview-size (300 - 600 kbytes). Note also that video clips are available on the web.

Other recent high-resolution photos are available from the M1 transport. More information is also present at the ESO website about the VLT project.

This series of astronomical images (and one spectrum) provides a demonstration of the impressive capabilities of the new ESO SOFI instrument which was recently tested at the 3.5-m New Techonology Telescope at La Silla, cf. ESO Press Release eso9805.

This is a composite of three 1-min exposures of the Orion Nebula through narrow band filters centered on the 2.166 micron Br-gamma atomic hydrogen line (here reproduced in blue colour), the 1.257 micron [FeII] line (green) and the 2.12 micron 1-0 S(1) molecular hydrogen line (red). The colour coding reflects the ionization state of the gas.

Br-gamma traces hydrogen gas that is ionized by the well known Trapezium and other hot, young, stars in the region; the [FeII] emission is emitted by high velocity fragments ejected during the birth of new stars in the OMC1 molecular cloud. The hollow filaments seen in molecular hydrogen result from shock heating of the molecular gas in the wake of the outflowing matter.

In this image, the scale is 0.29 arcsec/pixel; the field is 5x5 arcmin with North at the top and East to the left; The seeing was around 0.5 arcsec. (Colour composite by N. Devillard).

This is a short (12 sec) exposure of the globular cluster NGC1261 through an H-filter centered at 1.65 micron. Note the excellent resolution, achievable at this wavelength with the SOFI/NTT combination.

The field measures 2.5 x 2.5 arcmin, with North at the top and East to the left. The scale is 0.14 arcsec/pixel. The stellar images are very sharp (FWHM around 0.7 arcsec).

Next follows a composite of three narrow-band filter exposures of the famous Tarantula Nebula (30 Doradus) in our closest neighbouring galaxy, the Large Magellanic Cloud. The filters are centred on the 2.166 micron Br-gamma line of atomic hydrogen (blue); the 1.644 micron [FeII] line (green) and the 2.12 micron 1-0 S(1) line of molecular hydrogen (red). The colour coding reflects the ionization state of the gas.

The scale is 0.26 arcsec/pixel and the field is 4.5x4.5 arcmin with North at the top and East to the left. (Colour composite by F. Selman).

J band image (1.25 micron) of the galaxy cluster Abell 370 (A370; redshift z = 0.375), obtained in 'jitter' mode, showing the famous gravitational arc just below the centre. The observations consisted of 24 exposures of 2 min each, made on randomly generated telescope positions within a sky region of 30 x 30 arcsec. The individual exposures have been sky subtracted using a running average determined from the same data and then re-centred and combined.

The scale is 0.29 arcsec/pixel; the field is about 5 x 5 arcmin with North at the top and East to the left. The seeing was less optimal, about 1.2 arcsec. A J = 22 mag point source yields a signal-to-noise ratio of 4 within a 3 arcsec diameter aperture.

North is at the top and East to the left; the scale is 0.29 arcsec/pixel and the FWHM of point sources in this re-combined set of 38 1-min exposures is about 0.7 arcsec. A K = 21 mag point source yields a signal-to-noise ratio of 4 within a 1.5 arcsec diameter aperture.

A spectrum, covering the 1.6 - 2.45 micron infrared wavelength region was obtained with SOFI's 'red grism' of the radio galaxy MRC 0406-244 showing the redshifted 'visible' [OIII] doublet (emission from double-ionized oxygen atoms at rest wavelength 4959A and 5007A) and H-alpha (6563 A) emission lines. The oxygen lines are seen to the left and the hydrogen line is in the right half of the diagramme.

The 1.8 - 2.0 micron spectral region suffers from absorption in the terrestrial atmosphere and has been removed. After identifying the galaxy in a 1-min imaging exposure and centering it in the 2 arcsec wide entrance slit, four spectral exposures were obtained, each lasting 15 minutes, on two positions along the slit, to permit cancellation of sky emission lines and produce the `clean' spectrum shown here.

Additional information and images are available at the SOFI Homepage. 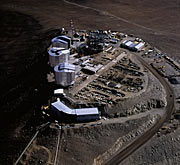 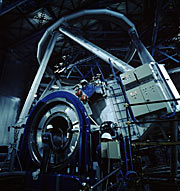 PR Image eso9804e
Aerial view of Paranal and Atacama desert
Send us your comments!
Subscribe to receive news from ESO in your language
Accelerated by CDN77
Terms & Conditions