Nearby Voids in the Universe

Motions of Nearby Galaxies Reveal No Invisible Matter

Using telescopes in Chile, Europe, Australia and the USA, an international team of astronomers [1] has discovered large empty regions ('holes') in what they refer to as the 'local Universe'. These regions, as well as others with excess mass density are revealed by a study of the motions in space of more than 2000 galaxies. They are among the largest structures ever seen in the Universe and have diameters of up to 100 million light years.

Large empty regions in the nearby Universe

Astronomers have known for a number of years that there are regions in the Universe where no galaxies, stars or gas can be seen by optical telescopes. In professional language, such `holes' are commonly referred to as `voids' . For some time, astronomers around the world have tried to detect at least some galaxies in these voids by using larger and more sensitive telescopes. Amazingly, only few such galaxies have ever been found, even by use of the best available equipment.

The failure to detect anything in these voids has led to speculations about the nature of the matter in voids. Could it be that it is there, but not in the form astronomers are best familiar with, namely stars and galaxies which can be detected with modern telescopes? Is it perhaps in some kind of exotic, invisible state?

The new study now gives a surprisingly simple answer to that question: There just is no matter in the voids!

How to detect the 'voids'

Astronomers can easily detect normal galaxies at very large distances with the help of technologically advanced optical telescopes, like the ones operated by the European Southern Observatory at La Silla in Chile. It was during such investigations in the 1980's, at ESO and elsewhere, that some `voids' were first found as regions of space where few galaxies could be seen.

However, it is very difficult to prove that there is 'nothing', i.e. absence of visible as well as invisible matter, in some region of the Universe. The reason is that matter may `hide' from the astronomers' view by not forming any stars. If so, matter could exist in a form that is not visible with a telescope.

For the present investigation, the team of astronomers used a completely different method to detect matter in the local universe. They set out by measuring the speed with which over 2000 well known galaxies move through space, by means of radio and optical telescopes around the world.

From galaxy velocities to mass density

ESO astronomers Luiz da Costa and Wolfram Freudling then developed a computer program which determines, from such measurements, how the matter is distributed in the corresponding region of space. The technique is essentially to check which distribution of matter will best reproduce the observed galaxy velocities.

For this, the programme relies only on the universal law of gravitation. As the end product, it delivers a simulated three-dimensional image of the distribution of all matter present, i.e. including otherwise invisible matter, if there is any.

Looking at the resulting map of the matter distribution, the ESO astronomers found several voids without any matter at all. This result was so surprising that both of them spent several months carefully checking all parts of their complex computer programme. Only after thorough tests confirmed the initial finding did they decide to present the outcome of this work. This trailblazing result will now be published in an article in the September 1, 1996, issue of the Astrophysical Journal Letters (Vol. 468, p. 5).

eso9631a that accompanies this Press Release is an example of a 'cut' through the local region of space. The Milky Way galaxy in which we live is at the centre. Empty voids, as well as regions with excess mass, for instance the `Great Attractor' that is known from earlier studies, are clearly seen.

So where is the matter?

How can there be such large empty regions? And how do they arise? These are fundamental questions which must be answered before we may claim to understand the evolution of the Universe.

Most astronomers believe that the Universe was formed about 10-15 billion years ago in a big explosion, the 'Big Bang'. From recent satellite and ground-based measurements of radio emission (the 'Cosmic Background Radiation') produced just after the Big Bang, it is known that no holes existed at that early time.

Therefore, the holes can only have formed later. Astronomers would therefore expect to find regions with larger number of galaxies which 'compensate' for the lack of matter in the large holes in the matter distribution. Indeed, many clusters of galaxies have been observed in which the mean mass density is higher than in the surroundings, but there is still not enough matter to explain the emptiness of the newly discovered holes.

It therefore appears that current theories of the formation of galaxies must be revised in order to explain this fundamentally new finding. 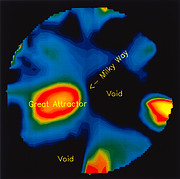 PR Image eso9631a
Nearby voids in the Universe
Send us your comments!
Subscribe to receive news from ESO in your language
Accelerated by CDN77
Terms & Conditions