Spectra of Comet Hyakutake were obtained at the ESO La Silla Observatory on February 29.3 UT by Klaus Simon (Institute for Astronomy and Astrophysics, University of Munich, Germany) and Chris Lidman (ESO-Chile). They used the Danish 1.54-m telescope with the multi-mode DFOSC instrument and a large CCD. The slit was centred on the brightest part of the cometary coma. The frames were reduced by S. Benetti (ESO-Chile).

This graphical representation is based on the combination of two 10-min exposures. They have been calibrated to show the wavelength (abscissa, in Angstrom) and relative intensity (ordinate). The spectrum covers the wavelength region 4000-8000 A with a spectral resolution of approx. 12 A.

This spectrum is typical for an incoming comet at Hyakutake's heliocentric distance, r = 1.52 AU (228 million kilometres) at the time of the observation. It shows that the comet continues to develop normally. See also the earlier spectrum obtained on February 8, cf. eso9612a.

The strongest features are from C2, C3, CN and NH2 molecules. There are also two strong lines from atomic oxygen ([OI]) near 6300 A. They are identified in the figure.

No lines from ions in the cometary coma are visible in this spectrum, with the possible exception of a very faint line from singly ionised carbon monoxide (CO+) near 4270 A. Such lines will become stronger, when the comet comes closer to the Sun and the increasingly intense ultraviolet radiation from the Sun ionises large numbers of the molecules in the coma. As they are driven away from the coma by the action of the interplanetary magnetic field, they will contribute to the formation of an ion tail. 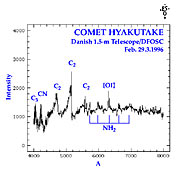 PR Image eso9616a
Comet Hyakutake
Send us your comments!
Subscribe to receive news from ESO in your language
Accelerated by CDN77
Terms & Conditions