This photo was obtained on 15 January 1996 and shows the progression of the work on the enclosure for VLT Unit Telescope no. 1 on Cerro Paranal.

It is interesting to compare it with the view obtained 5 1/2 months earlier, on 6 August 1995. It was made at the moment when the second half of the roof structure was put into place. The mounting of the outer walls (the cladding) was to start soon thereafter. At this moment, first light with VLT Unit Telescope no. 1 is expected in late 1997. 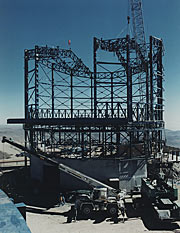 PR Image eso9605a
Enclosure for VLT Unit Telescope 1
Send us your comments!
Subscribe to receive news from ESO in your language
Accelerated by CDN77
Terms & Conditions