A few months ago, Periodic Comet Schwassmann-Wachmann 3 underwent a dramatic and completely unexpected, thousand-fold brightening. At that time, the cause for this interesting event was unknown. However, observations with the two largest ESO telescopes have now shown that the "dirty snowball" nucleus of this comet has recently split into at least four individual pieces. There is little doubt that the outburst and the splitting event(s) are closely related and that the greatly increased dust and gas production is due to "fresh" material of the icy cometary nucleus becoming exposed to the surrounding space for the first time.

A Comet with a Troubled History

Comet Schwassmann-Wachmann 3 was discovered on May 2, 1930, on a photographic plate obtained at the Hamburg Observatory (Germany) by two astronomers at this institution, Arnold Schwassmann and Arthur Arno Wachmann. The subsequent observations showed that the comet moved in an elliptical orbit with a revolution period of somewhat more than 5 years.

Great efforts were expended to observe the comet during the next returns, but it was not recovered until nearly 50 years and eight revolutions later, when its faint image was found of a plate obtained in August 1979 with a telescope at the Perth Observatory in Western Australia. It was missed in 1984, but was sighted again in 1989 and most recently in 1994. Thus this comet has only been observed during four out of thirteen approaches since 1930. While this may be partly due to a less advantageous location in the sky at some returns, it is also a strong indication that the comet behaves unpredictably and must have a quite variable brightness.

For the sake of convenience this comet is often referred to as ``SW-3" by professional astronomers. Recent orbital calculations have shown that it was inserted into the present, short-period orbit by the strong gravitational pull of Jupiter during several, relatively close encounters with this giant planet. For instance, it passed Jupiter at a distance of about 30 million kilometers in 1882 and 1894, and again at 40 million kilometres in 1965. SW-3 belongs to the so-called ``Jupiter family" of comets.

Some time ago, SW-3 was chosen as a back-up target for the upcoming Rosetta space mission by the European Space Agency (ESA) because the elliptical orbit of this particular comet may be reached with a relatively small expenditure of rocket fuel (the prime target is Comet Wirtanen). That allows to carry more scientific instruments on this extraordinary mission which aims at a long-term study of a cometary nucleus from a spacecraft in circum-cometary orbit. Rosetta will be launched early in the next century and will also carry two landing modules which will descend on the surface of the nucleus.

The Dramatic Outburst of SW-3

In order to study this potential Rosetta target comet, Hermann Boehnhardt (Astronomical Institute of the Ludwig Maximilian University, Munich, Germany) and Hans-Ulrich Kaufl (ESO-Garching) early in 1995 applied for simultaneous observing time at the ESO 3.6-m telescope and 3.5-m New Technology Telescope (NTT) at the La Silla Observatory. In May 1995, the ESO Observing Programmes Committee (OPC) granted the astronomers some nights for these observations in mid-December 1995 with the TIMMI and EMMI instruments at the 3.6-m and the NTT, respectively, i.e. not quite two months after the predicted perihelion passage on September 22, when the comet would be closest to the Sun (140 million kilometres).

Meanwhile, SW-3 was moving closer towards the Sun. After its recovery in December 1994 with the 3.5-metre reflector at the Calar Alto Observatory in Spain, Kurt Birkle and Hermann Boehnhardt collected a series of almost monthly images with that telescope until late June 1995, showing that the comet developed normally with respect to its brightness and the coma and tail. On August 20, it was observed by a Japanese amateur astronomer at magnitude 13, quite normal for this comet at the given heliocentric distance. This corresponds to about 700 times fainter than what can be seen with the unaided eye.

However, on September 8-12, Jacques Crovisier and his colleagues from the Paris Observatory (Meudon) used the large Nancay radiotelescope to determine the amount of hydroxyle molecules (OH) around SW-3. To their great surprise, they found that it was much larger than predicted. Their careful measurements showed beyond any doubt that SW-3 was emitting enormous amounts of water (H2O), the ``parent" molecule from which OH is produced by dissociation.

Subsequent visual observations by amateur astronomers all over the world confirmed that a dramatic outburst was in progress; on September 17, the comet was recorded at magnitude 8, or 100 times brighter than expected. The overall intensity kept increasing until mid-October, when the magnitude was brighter than 6, or nearly 1000 times brighter than expected, and the comet was in principle visible to the naked eye from dark sites. Only a few comets have ever experienced such an enormous, unexpected increase in brightness. At that time, SW-3 had just passed its perihelion and was "crossing" the Earth's orbit on its way out. The distance to the Earth was close to 200 million kilometres.

The Observations at ESO

It was therefore with particular expectations that the two astronomers went to their respectively ESO telescopes on December 12-14, 1995, to observe SW-3. Although the comet at this time had become about 5 times fainter than when it was brightest, they still hoped that their observations would be able to cast some light on its very peculiar behaviour.

And indeed, thanks to the very good image quality, both the EMMI and TIMMI instruments immediately and for the first time showed that the nucleus of SW-3 had split. On the CCD images from EMMI, three distinct light condensations were visible, well aligned with the two outermost at an angular distance of 4.1 arcseconds. At the time of the observations, SW-3 was 258 million kilometres from the Earth; this angle corresponds to a projected distance of 5,100 kilometres. Moreover, on the TIMMI exposures which were performed at the far-infrared wavelength of 10 microns, yet another condensation was visible.

These condensations are small clouds of gas and dust which emanate from the separate pieces of the nucleus. A careful comparison of the relative positions, as observed on different nights, clearly shows that they are slowly drifting apart. Fortunately, it turned out that another image of SW-3 had been obtained in early December by ESO astronomer Jesper Storm at the Danish 1.5-metre telescope. Due to unfavourable atmospheric conditions, the image sharpness is less good, but the central condensation is very elongated. The extension is about half of the distance between the outermost condensations as measured ten days later.

This indicates that the splitting may have taken place by mid-November, or at least that the outward motion cannot have started much earlier. This also explains why this effect was not seen before.

It therefore appears that the actual separation began about one month after the moment of maximum brightness and nearly two months after the perihelion passage. Still, there is little doubt that it is closely related to the processes which led to the dramatic outburst. Further observations will help to refine the description of the break-up process, but a simple explanation is that major cracks and rifts opened in the irregularly shaped icy nucleus already before perihelion as the surface temperature began to increase. Completely ``fresh" cometary material was thereby exposed to the solar light and the evaporation rate increased quickly, releasing more gas and dust into space. In the course of this process, the rifts gradually widened until the definitive breakage occurred somewhat later.

About 30 comets have been observed to split in historical times and this process is almost always accompanied by a significant brightening. For instance, the nucleus of comet Shoemaker-Levy 9 broke up into at least 21 individual pieces when it passed very close to Jupiter on July 8, 1992; this was the reason that it became bright enough to be detected some eight months later. In the case of SW-3, the opening of rifts and the subsequent splitting took place far from any planet and must in some way have been caused by increased solar heating. Nevertheless, it is not yet known exactly which physical and chemical processes are involved.

It will now be interesting to continue the observations of the individual nuclei as long as possible. From accurate positional measurements, it may later become possible to perform a backwards extrapolation and determine the exact conditions of the splitting process (time, involved forces) and thereby cast more light on the physical aspects of this event.

The break-up of a solar system object is a dramatic and relatively rare event. We are here directly witnessing the ageing of a comet, perhaps even the prelude to its death. Earlier measurements indicate that the diameter of SW-3's nucleus is smaller than about 3 kilometres, but since we do not know the size of the pieces that broke off (this may be indicated by how long they will remain active), nor their number (we may only see the largest), we cannot yet determine with any certainty the remaining lifetime of the main nucleus.

At the first glance, this seems to indicate that SW-3 must be removed from the list of potential targets for the Rosetta mission - we cannot risk that it no longer exists when the space probe arrives ! On the other hand, due to the break-up there is now a lot of ``fresh" cometary material on the surface of the nucleus and around it, i.e. matter that has remained unchanged since the beginning of the solar system, some 4,500 million years ago. The possibility to gain direct access to a sample of the material from which the solar system emerged obviously makes this comet even more interesting as a target. 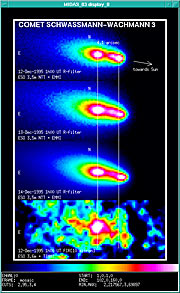 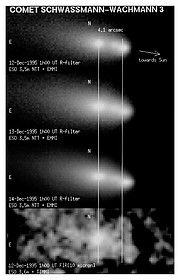